Cairo is treading cautiously on Ankara’s fence-mending overtures toward Turkey. 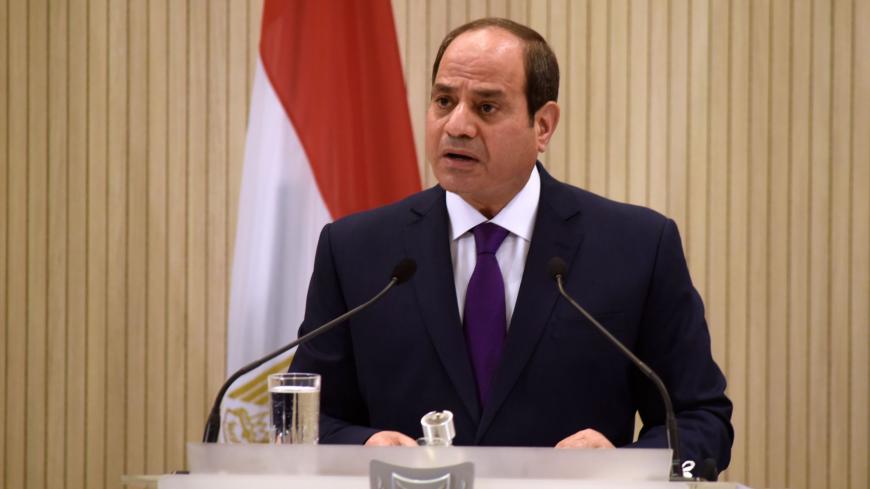 Egyptian President Abdel Fattah al-Sisi speaks during a joint press conference after the trilateral summit with the leaders of Egypt, Greece and Cyprus at the presidential palace in Cyprus' capital Nicosia on Oct. 21, 2020. - IAKOVOS HATZISTAVROU/AFP via Getty Images

After nearly eight years of vitriolic discord and regional bickering, Turkey is on a quest to mend fences with Egypt, hoping that the prospect of mutual geopolitical gains will pave the way for reconciliation and help soften the energy rivalry in the eastern Mediterranean. Cairo appears open to Turkey’s overtures, but true normalization might prove elusive until the leaders of the two countries overcome their personal grudges and engage in direct dialogue.

On March 12, Turkish President Recep Tayyip Erdogan, who has called his Egyptian counterpart a “murderer” and a “tyrant,” said intelligence and diplomatic contacts were under way with Cairo, expressing desire to take them to a higher level. Foreign Minister Mevlut Cavusoglu, meanwhile, said the contacts were progressing slowly and gradually after years of disconnect and mistrust between the two countries.

Two main reasons have driven Ankara’s reconciliation efforts. The first is geopolitical: the isolation in which Turkey finds itself in the energy rivalry in the eastern Mediterranean. The prevailing view in Ankara holds that Egypt has an incentive to enter into unconditional talks with Turkey on delimiting maritime boundaries between the two countries because such an accord could allow it to claim a zone larger than the one under its existing deal with Greece. Turkey, in turn, would bolster its standing in the eastern Mediterranean while Greece and its supporters would have to reposition themselves. Furthermore, a Turkish-Egyptian deal would encourage Israel to soften its attitude toward Turkey and could lend international viability to the maritime delimitation deal that Ankara signed with Libya’s interim government in 2019.

The second reason is Ankara’s gradual realization of the limits of its capacity and influence in the region.

Ankara aims to send a high-level delegation to Cairo by June to kick off a process of normalization. The two sides have been at loggerheads since the 2013 ouster of Egyptian President Mohammed Morsi, who belonged to the Muslim Brotherhood and was a close ally of Ankara. Erdogan has vehemently criticized Morsi’s ouster and the ensuing crackdown on the Muslim Brotherhood while scores of Brotherhood figures have taken refuge in Istanbul. Official ties have been downgraded to the charge d’affaires level since the mutual withdrawal of ambassadors in August 2013.

The Turkish authorities have reportedly asked three Egyptian opposition TV channels based in Istanbul — al-Sharq, Mekamleen and Watan — to tone down their criticism of the Egyptian government and stop personally attacking President Abdel Fattah al-Sisi. Turkish sources contacted by Al-Monitor confirmed the news without elaborating. In remarks to a pro-government daily an adviser to Erdogan said the channels had been asked “to review their editorial policies,” but denied that Ankara would shut them down or arrest and extradite Egyptian exiles. The Saudi Al Arabia network claimed last week that several Brotherhood leaders had been placed under house arrest.

A Turkish-Egyptian reconciliation does have the potential to alter the current equilibrium in the eastern Mediterranean and, crucially, Cairo has not slammed the door on Ankara’s overtures. Foreign Minister Sameh Shoukry acknowledged diplomatic contacts with Ankara last week while conditioning reconciliation on a “real change” in Turkey’s regional policies. “If we find a real change in Turkish policy aligning with those of Egypt to stabilize the region … that could lay the groundwork to normalize relations,” he said. “Words are not enough; they must be matched by deeds.”

In the row over the Muslim Brotherhood, which Cairo designated as a terrorist group after Morsi’s toppling, Egypt has accused Turkey of interfering in its domestic affairs by sheltering Brotherhood members and allowing them to carry out anti-government activities from Turkish soil. The issue is reportedly a primary topic discussed in intelligence contacts between the two sides.

Since 2013, however, the fallout between Turkey and Egypt has spilled over to Libya and the eastern Mediterranean. In Libya, the two countries have stood behind the opposing sides of the conflict, with Egypt backing the eastern forces led by Khalifa Hifter, who sought to unseat the UN-recognized, Turkish-backed government in Tripoli. As the Libya crisis became intertwined with the energy rivalry in the eastern Mediterranean, Ankara signed maritime delimitation and military cooperation accords with Tripoli in November 2019. In the ensuing months, Turkish military support for its Libyan allies proved crucial in defending Tripoli against Hifter’s forces.

Cairo remains deeply disturbed by the Turkish military presence in Libya. At an Arab League meeting March 3, Shoukry denounced Turkish military deployments in Arab countries, including in Syria, saying that Ankara’s policies only deepen polarization and discord in the region.

The regional rifts led Egypt to align with Greece, Turkey’s traditional rival, in rows over gas exploration rights in the eastern Mediterranean. Egypt had already signed a deal delimiting maritime economic zones with Greek Cyprus in 2003. Ankara is now faced with a multilateral adversary bloc that has taken steps toward institutionalization such as the EastMed pipeline project and the Cairo-based East Mediterranean Gas Forum.

Last but not least, the personal feud between Erdogan and Sisi has only added to the bad blood. In fact, a lasting settlement of bilateral issues might have to wait for the two leaders to come together for a fence-mending summit. Erdogan has so demonized Sisi in domestic politics that he would struggle to justify such a meeting to his conservative-nationalist base. For Sisi, too, a face-to-face meeting with Erdogan would be an awkward move domestically. Many in Turkish government quarters argue that a thaw with Egypt would not necessarily mean a direct dialogue between the two leaders, but normalization is unlikely to proceed in earnest without Erdogan-Sisi meeting.

The prospect of such a meeting appears dim at present, though a clearer picture will emerge after the preliminary talks a Turkish diplomatic delegation is expected to hold in Cairo by early June. Due to pressing geopolitical needs, Ankara and Cairo may have strong incentives to overcome their ideological rift and multiple crises, but at the end of the day, the whole process will depend on Erdogan and Sisi.