Turkey appears reluctant to back down from its military posture in Libya, even as its normalization bid with Egypt depends greatly on whether the two sides find common ground in the Libyan conflict. 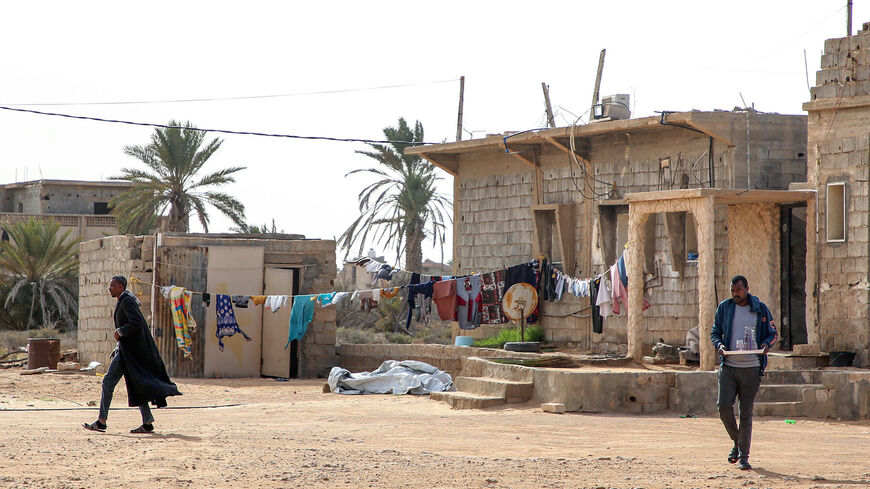 A man walks near a laundry clothing line hanging in the open by a building in the city of Tawergha, some 200 kilometers (125 miles) east of Libya's capital close to the port city of Misrata, on Dec. 12, 2020. - MAHMUD TURKIA/AFP via Getty Images

Turkey and Egypt held their first high-level meeting in eight years last week, but Ankara has shown no signs of backing down in Libya thus far, even as its normalization bid with Cairo depends largely on whether the two regional rivals find common ground in the Libyan conflict.

The May 5-6 talks in Cairo, chaired by the deputy foreign ministers of the two countries, took place relatively soon after Turkey began to publicly voice its overtures in March — a signal that Egypt, too, is eager to break the ice in bilateral ties.

Turkey’s pro-government media were rather subdued in their coverage of the meeting, as if they struggled to change tune after years of vilifying Egyptian President Abdel Fattah al-Sisi over the ouster of the Muslim Brotherhood government, a close ally of Ankara, in 2013. Turkish President Recep Tayyip Erdogan called Sisi a “putschist” and frequently blasted him in his speeches at home, nourishing a strong anti-Sisi sentiment in his conservative-nationalist base.

According to the Egyptian and international media, the talks focused on the conflict in Libya where Egypt and Turkey back opposing sides, the energy rivalry in the Eastern Mediterranean and Ankara’s support for the Muslim Brotherhood, which Cairo has designated a terrorist organization.

In Libya, Egypt is averse to the presence of Turkish military forces and affiliated mercenaries but seems to recognize that it needs some understanding with Turkey to achieve lasting stability in its western neighbor. The initial focus of the two sides was on the issue of power-sharing in Libya as they tried to gauge their mutual red lines in the lead-up to the war-torn country’s elections in December.

In the Eastern Mediterranean, Egypt has aligned with Greece, the Greek Cypriots and Israel, and any understanding with Turkey would require it to find a way that does not alienate its partners. Turkey has been largely isolated in the gas exploration rivalry in the Eastern Mediterranean — a key driver behind its military involvement in Libya, which followed its signing of two crucial deals with the previous Tripoli government in November 2019, one that delimited maritime zones between the two countries and the other on military cooperation.

As for the Brotherhood, Cairo sees Ankara’s backing of the movement — including the refuge it has offered to Brotherhood members fleeing Egypt — as interference in Egyptian domestic affairs. Cairo is aware that it cannot get Ankara to cut support for the movement at a stroke but believes it could disable Brotherhood exiles who remain keen on impacting Egypt’s domestic politics. In March, Ankara did press Istanbul-based TV channels linked to the Brotherhood to moderate their criticism of the Egyptian government. Whether Turkey could extradite convicted Brotherhood members is the thorniest question in this dossier.

Following the talks in Cairo, the next step is widely expected to be a meeting between the Turkish and Egyptian foreign ministers. It would come as a sign that the two sides have managed to build a degree of trust and are willing to forge ahead with normalization.

Looking ahead, the Libyan conflict and related geopolitics in the Eastern Mediterranean appear to be bigger stumbling blocks on the way to reconciliation than the issue of the Brotherhood and ideological differences between Ankara and Cairo.

It is too early to say whether Ankara and Cairo could find common ground in Libya, but the presence of Syrian mercenaries brought in by Turkey is likely to pose the first test to the two sides’ ability to compromise.

The Syrian fighters — members of Free Syrian Army factions, which have backed Turkey in its military campaigns in Syria — number at least 2,000 and are currently stationed at a military base between Tripoli and Misrata, Turkish sources knowledgeable of the matter told Al-Monitor.

About 700 Syrian fighters were sent back to Syria in April, with the rest notified that they would stay in Libya at least another five months and their accommodation and training would continue at their current base, the sources said.

Meanwhile, Turkish military officers who have been involved in train-and-equip programs and military advisory missions remain deployed at al-Watiya (the largest air base in western Libya), at the Tripoli military port, at the al-Khums naval base east of Tripoli, at the Zuwara barracks to the west of the capital, at several bases in Misrata, and at the military academies in Tripoli and Misrata. Several hundred other Turkish soldiers have been active on the ground in the Tripoli and Misrata areas and involved in various missions such as command, control, communication, intelligence, reconnaissance, air defense, electronic warfare and demining.

Turkish soldiers in Libya number about 500 at present; more than half of them are combat forces. All of them are now involved in training military and police units affiliated with the Government of National Unity, headed by Abdul Hamid Dbeibeh who took office in March as part of a UN-backed effort to bring the Libyan adversaries together and take the country to elections in December. Turkish units are taking part also in the clearance of mines around Tripoli, the remnants of the city’s one-year siege by the eastern forces of retired Libyan general Khalifa Hifter.

According to Libyan sources, Cavusoglu and Libyan Foreign Minister Najla Mangoush discussed the political settlement process in Libya as well as positive and negative scenarios on how the fence-mending bid between Egypt and Turkey could impact Libya and the Government of National Unity.

Meanwhile, Akar and Fidan held talks with their Libyan counterparts from the interim government on a range of issues including Syrian fighters, mercenaries from the Russian Wagner group and neighboring Chad who have backed the eastern forces, the military situation in southern Libya, and the conflict in Chad following the death of its president, Idriss Deby. The two sides agreed that a new batch of Libyan soldiers and police would be sent to Turkey for training. They also reportedly agreed that the Turkish military presence at the bases in al-Watiya and al-Khums should continue as long as the threat from Hifter or external forces is deemed to persist.

At a joint press conference, however, Mangoush issued a straightforward appeal to Turkey to cooperate in ending the presence of foreign forces in Libya. “We call on [Turkey] to take steps to implement all the provisions of … the Security Council resolutions and to cooperate together to expel all foreign forces and mercenaries from the Libyan territories,” she said. In an apparent hint that Ankara has no immediate intention to withdraw forces, Cavusoglu responded that Turkey’s military involvement had been at the request of the previous Tripoli government and rebuked “those who equate our legitimate presence to that of foreign mercenary groups fighting in the country for money.”

In a further sign that Turkey wants to maintain the military status quo regardless of who is in charge in Tripoli, Akar said Turkey’s military presence aimed to protect the rights of the Libyan people as he addressed Turkish soldiers in Tripoli during an event attended by Libya’s chief of general staff and other military officials.

Judging by the indications thus far, Ankara appears to hope that its reconciliation bid with Egypt would eventually favor its allies in Libya. It seems reluctant to withdraw the Syrian fighters for now due to the continued presence of Russian, Chadian and Sudanese mercenaries on the opposite camp and its apparent conviction that a lasting political settlement is not a realistic prospect in Libya under the present circumstances. Ankara remains mistrustful of Hifter and wants to maintain its military presence until the eastern commander is decisively sidelined, politically and militarily. And more broadly, Ankara wants to keep its hard-power options across the region, despite its bids at reconciliation with Cairo and its Gulf allies.

Nevertheless, the fledgling normalization bid with Egypt, including the quest for common ground in Libya, and de-escalation efforts in the Eastern Mediterranean amount to a regional confidence test for Turkey. Riyadh and Abu Dhabi are all ears on what news they will get from Cairo. Should Ankara pass the test, Turkish diplomats could well be headed for Riyadh next.