Both sides of the Libyan conflict have so far failed to agree on the departure of foreign fighters from Libya as required by the country’s political settlement document known as the road map; it appears the issue rests with Moscow and Ankara. 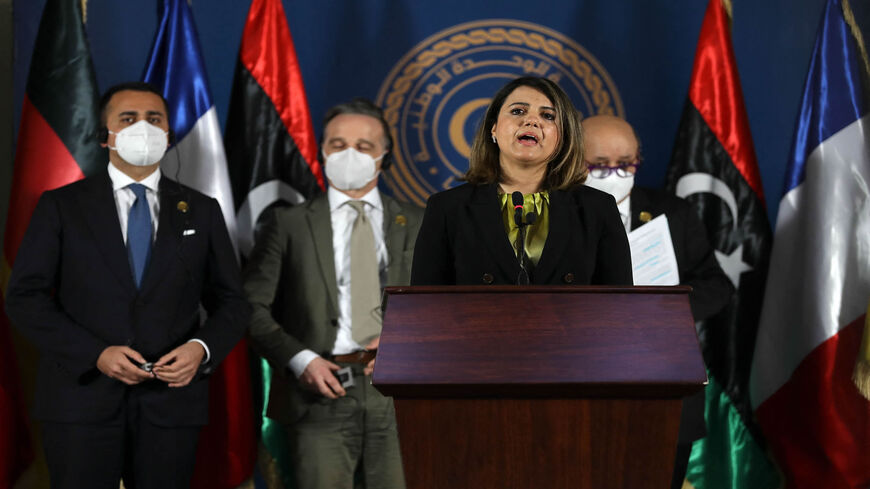 Libya’s foreign minister has repeatedly called for foreign troops and mercenaries to leave the country. The latest call from the country’s first female foreign minister, Najla al-Mangoush, came in a press briefing with her Turkish counterpart who visited Tripoli May 3. Mangoush said she wants Turkey to cooperate with Libya to end “the presence of all foreign forces and mercenaries” on Libyan soil. She concluded her comments by saying that such a step would “preserve” Libya’s sovereignty.

However, her guest had a different view of the subject. Turkish Foreign Minister Mevlut Cavusoglu did not directly address the issue at hand; instead, he appeared to be questioning who should leave Libya in the first place. Cavusoglu said it was wrong to equate the Turkish military presence in Libya with that of “illegitimate groups," he said. He noted that his country sent troops to help defend Tripoli. The two ministers ended their private meeting discussing the matter, but they appeared to disagree publicly.

In November 2019, Tripoli’s previous government signed a security memorandum with Ankara. Neither sides have, so far, disclosed the details of the deal but, essentially, it granted Turkey the right to send professional troops to Libya for training and other tasks. The Turkish parliament, on Jan. 2, 2020, voted to allow the military deployment of troops in the North African country. However, Ankara did not only send regular troops but thousands of Syrian fighters from a pool of mercenaries available to Ankara from among different Turkey-loyal Syrian armed groups.

The US Defense Department estimated that Ankara sent more than 3,500 Syrian fighters to Libya. The Syrian Observatory for Human Rights estimated that by September 2020 at least 15,000 Syrian fighters were in Libya. Notably though, Mangoush, in her many statements on the issue, never actually uttered the words that “Turkish troops” should leave, too.

Her supporters, though, defend her by saying that she has already said many times that “all foreign forces and mercenaries” should depart the country. This should mean Turkish troops, too. But to her critics, the “all foreign forces and mercenaries” statement is too general and does not necessarily include Turkey’s regular army officers in Libya now.

A political adviser to Libya’s former government, with first-hand knowledge of the 2019 security deal, told Al-Monitor that “one should remember that Tripoli was under siege” by Khalifa Hifter’s Libyan National Army (LNA) forces when the security deal was signed.

To put Mangoush’s statement in context, the adviser said that “Tripoli was desperate to defend itself against Hifter” and Turkey came to the rescue. On the question of whether the security deal legalizes the use of Syrian mercenaries or not, the adviser noted that “whatever Turkey brought to Libya is legal,” as long as it does not, openly, contravene the terms of the security deal. Such terms remain unknown as neither Tripoli nor Ankara published any details from the document.

The question of foreign fighters and mercenaries — who should leave and when — remains a puzzle.

Back in 2019, Hifter’s troops were a few miles away from Tripoli’s city center and they kept their stranglehold on the capital throughout the summer of 2019 and early 2020. Their siege of the city started to loosen only after Turkish troops and their Syrian mercenaries arrived on the battlefield.

By June 2020, the LNA lost its positions around Tripoli and started to crumble. The former adviser said that loss created a kind of domino effect that saw the LNA’s positions — from southern Tripoli to Tarhouna, further southeast — fall one after the other rather quickly.

All that is history now. But the question remains who, actually, can now decide if all foreign forces and mercenaries should leave Libya? Does the security deal indicate any time frame for these troops and forces to leave Libya’s territory? This last bit remains a secret to date because too little is published about the security deal between Tripoli and Ankara..

Most importantly, who are the foreign forces, including the mercenaries, that are in Libya now? Tripoli university law professor Al-Hadi Omar believes there are many “foreign troops in Libya today.” He told Al-Monitor, "There are 3,000+ troops from Russia’s Wagner Group in addition to hundreds of mercenaries from Sudan, Chad and Syria.” All those groups have fought alongside the LNA over the last few years, and many of them are still in Libya. The Syrian mercenaries are split into two: those who help the LNA and others, mostly brought in by Ankara, to help the previous Tripoli government.

Omar added that “when Mangoush says all foreign forces” should leave, you have to look at the statement in the “right context.”

LNA supporters, for example, believe the foreign minister means only those foreign fighters helping the LNA excluding Turkish and Syrian mercenaries that fought for Tripoli’s former authority. To these LNA supporters, the security deal that brought such troops into Libya is an illegal document. Accordingly, Turkish troops and their Syrian mercenaries should also leave Libya. This of course has been a key demand of Hifter as well.

Legally, though, Omar said the current Government of National Unity (GNU) is “bound by any treaties or deals made by its predecessor.” This means Turkish troops are excluded as they came to the country under official security arrangement by Tripoli and Ankara. Omar concluded by saying “if Libya asks for such troops to leave then they should leave.” This is likely to be another contentious issue on deciding the matter.

The LNA’s contingents of foreign fighters are now in the area of Sirte, in the center of the country, while Turkish troops and their Syrian mercenaries are in two locations: the new naval base near Misrata, east of Tripoli, and al-Watiya, an old Libyan army air base once held by the LNA, located southwest of the capital and overlooking Libya’s Mediterranean coastline.

Against this background, it appears neither the LNA nor the GNU can actually decide who should leave and when and who should stay. Russia, for example, always denies having any control over the Wagner Group personnel. President Vladimir Putin himself went on the record, earlier last year, and denied that Russia has any control over the Wagner Group in Libya. In September 2020, Russia’s United Nations Permanent Representative Vasily Nebenzya rejected any suggestion of Russian interference in Libya by saying that "not a single Russian serviceman” is currently in Libya.

The Joint Military Commission — also called the 5+5 commission — made up of equal numbers of military officers from eastern and western Libya, agreed on a cease-fire and exchange of prisoners but failed, so far, to agree on how to get the foreign fighters out. In its last meeting in Sirte, on March 16, it requested help from the UN Security Council to remove foreign fighters.

Turkish Defense Minister Hulusi Akar, while visiting his troops in Libya May 3, noted that the Turkish presence in Libya is of vital importance in protecting “[Turkish] rights in the eastern Mediterranean.” Omar said this means that “Ankara is looking to the long term” and wants to remain in Libya for at least the coming decade. In practice, this could derail Libya’s planned December elections. Indeed, the current government is supposed to get all foreign troops out of the country by election time.

Omar added that “neither Hifter nor Prime Minister Abdul Hamid Dbeibeh” can decide when foreign fighters should leave Libya. Such a decision rests with Ankara and Moscow, not with Tripoli or even the UN Security Council.

If this is the case, then the entire road map that gave rise and legitimacy to the GNU could be in jeopardy. One of its prerequisites for free and fair elections is the departure of foreign troops from Libya before any elections could take place. This has yet to happen but the planned election date is getting nearer everyday.