Gen. Abdel Fattah al-Sisi's call for Friday protests may be a maneuver to show the world how little support the Muslim Brotherhood has overall in Egypt. 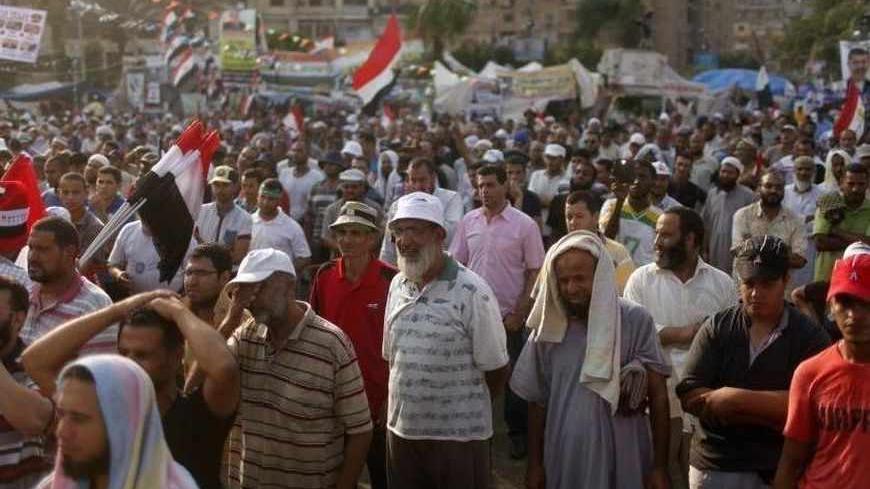 Supporters of deposed President Mohammed Morsi listen to a speech during a rally around the Rabia al-Adawyia mosque square in Cairo, July 24, 2013. Egypt's military chief called for mass rallies on Friday to give him a mandate to tackle violence that has surged following the overthrow of Morsi, ramping up pressure on the Muslim Brotherhood. Morsi's backers announced plans for 34 marches in and around Cairo on Friday. - REUTERS/Asmaa Waguih

On Wednesday [July 24] Gen. Abdel Fattah al-Sisi, the defense minister and deputy prime minister of Egypt, called for nationwide protests on Friday, July 26, to give him the mandate to “face violence and terrorism.” In response, the Muslim Brotherhood said it would continue with its own protests on the same day.

Considering the tension in Egypt, both calls are reckless, but beyond that: What is the point behind these protests? What is the endgame for supporters of former President Mohammed Morsi or Sisi? Who has the advantage?

If protests deliver little, then they mean little. Either they have to deliver huge numbers in order to show public support for a particular political demand, or they have to result in some sort of critical action that delivers the same. Otherwise, they’re pointless.

This strategy is severely flawed. In the aftermath of the January 2011 uprising, the base of support for the Muslim Brotherhood and its political party, Freedom and Justice (FJP), was solid, larger than any other political force — but it was not large. The Freedom and Justice Party had support of 15% of the population in July 2011, with 29% uncertain and 56% opposed, according to a Gallup poll. By the parliamentary elections, it had managed to win over a great deal of the uncertain portions of society, and even some of those opposed to it.

Since then, however, the FJP and the Brotherhood have lost much, if not all, of their support beyond their base. Various public opinion polls have shown the Brotherhood, FJP and Morsi to be increasingly unpopular for months. The pro-Morsi camp has support, but the assumption that it has more than 15-20% around the country, or that the non-Morsi camp is on the fence about it, cannot be easily substantiated.

Indeed, the more protests that ensue from the pro-Morsi camp, the more the Muslim Brotherhood is likely to find its support dropping. The public mood is not only against the Brotherhood, but is deeply keen to return to normalcy, which is being interrupted by pro-Morsi marches and the disruptions of main thoroughfares. The reality is that while pro-Morsi supporters may have the right to engage in peaceful protests, the majority of the population not only opposes them, but considers there to be violent elements amid the demonstrators. With that in mind, any violence from the state against pro-Morsi protests is likely to receive full backing from the wider population — not sympathy for the Brotherhood.

When it comes to the military’s move for Friday, the reasoning is quite different. One might presume that the military is testing its own mandate and popularity among the population, in advance of engaging in more stringent measures against the Muslim Brotherhood. Indeed, much of the international community seems to doubt that the population is heavily behind the military’s move to overthrow Morsi, and the Brotherhood believes that Egyptians at large are at least uncertain about the move, if not quietly opposed to it.

The military, on the other hand, probably assesses this differently. The military is widely popular in Egypt, and has been since the beginning of the revolution. At its lowest point of popularity, in December 2011, the military and its leadership still enjoyed the confidence of 9 out of 10 of Egyptians. Over the past few months, its popularity increased — although it may have taken a bit of a hit this month as a result of its losing the support of the Brotherhood. The military is undoubtedly aware of its secure place in the eyes of the populace — and also of Egyptian anger against the Brotherhood amid suspicions that Brotherhood members are turning to violence. A popular mandate to crack down on the Brotherhood is not necessary — the military already has it.

Why, then, might the military be calling for such protests? There may be two critical motivations here. The first is to send a message to the international community that the military has overwhelming public support, while the pro-Morsi forces do not. The second, which is more strategic, may be to use these protests to put popular pressure on the pro-Morsi camp — both among those who are being detained without charge, and those on the street — to acquiesce, and accept a deal from the military. The broad guidelines of that deal appear to be the continued legal registry of the Freedom and Justice Party, registration of the Muslim Brotherhood as a nongovernmental organization and its recognition of — if not participation in — the military-backed transitional process.

The reality, however, is that while it might be strategically beneficial for the Brotherhood to accept such terms, it is unlikely to do so. It could call the military’s bluff (if it is one) and enter the interim government, and from there demand Morsi’s release. But it is doubtful the Brotherhood will do that. On the contrary, it may view this new escalation as more of a reason to bear down, dig in and reject any compromises.

In the meantime, the presence of millions of people out on the streets in protests, as is likely on Friday, does not do much to lessen tension on the ground. Indeed, it could lead to even more violence than we have seen thus far, leaving overall stability and political reconciliation in Egypt even further away.

H. A. Hellyer, a nonresident fellow at the Project on US–Islamic World Relations at the Brookings Institution and fellow at the Institute for Social Policy and Understanding, is a Cairo-based specialist on Arab affairs and West–Muslim world relations. Follow him on Twitter @hahellyer.