Turkey is increasingly isolated in the region, more so as Qatar is on the outs with other members of the Gulf Cooperation Council. 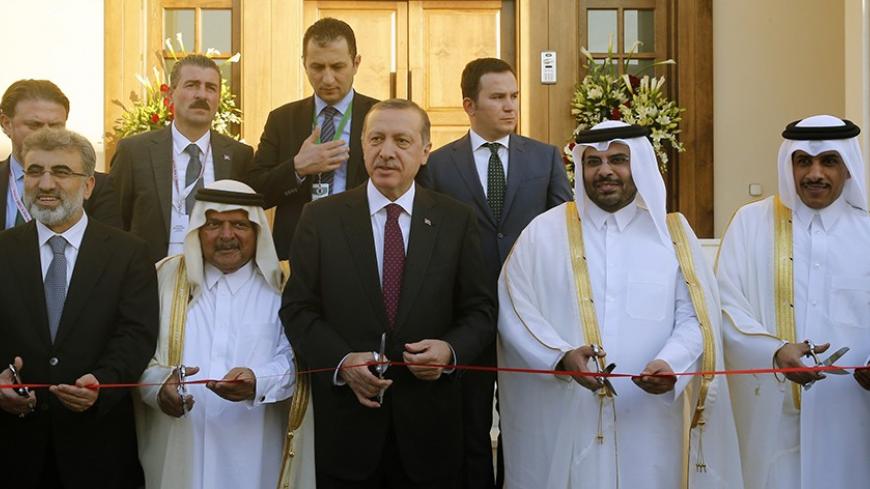 Turkey’s already waning influence in the Middle East has taken fresh blows as a result of the Saudi-led move to isolate Qatar because of its backing of the Muslim Brotherhood, and Egypt’s decision to ban Hamas, which is widely considered to be a Brotherhood offshoot.

Qatar today remains one of the few regional allies of any note Turkey has left in a region where the government of Prime Minister Recep Tayyip Erdogan once hoped somewhat ambitiously to be a major player. Madawi Al-Rasheed, in her March 6 analysis for Al-Monitor, provides the background to Saudi efforts against Qatar in the Gulf Cooperation Council (GCC) that clearly have implications for Ankara.

Turkey started losing regional influence after Erdogan abandoned the country’s traditional policy of neutrality in Middle Eastern disputes, starting with the crisis in Syria, and revealed his sectarian preferences. This development, dubbed the “Sunnification of Turkish foreign policy” by Erdogan’s domestic and foreign critics, also revealed Erdogan’s great affinity for the Muslim Brotherhood.

Erdogan and his Justice and Development Party (AKP) are not just seen today as staunch supporters of the Brotherhood, but also as a key member of what has been referred to as the “Muslim Brotherhood International.”

Tellingly, former Egyptian President Mohammed Morsi — whose political future in the “new Egypt” appeared guaranteed at the time — and Khaled Meshaal, the leader of Hamas’ political bureau, were invited by Erdogan to the AKP’s general congress held in September 2012, where they were the principle guests of honor.

Both men had received standing ovations before and after delivering heated speeches in support of Erdogan and his party, during which they indicated that Turkey under the Islamist AKP was a main force that would help shape the new Middle East.

Erdogan, Morsi and Meshaal did not suspect at the time that there were regional forces — other than Israel — working to their detriment.

On the contrary, all three leaders saw themselves as unstoppable and considered their political future guaranteed. It was no surprise therefore that the coup in Egypt, which ousted Morsi in July 2013, should have caught Erdogan totally off guard. Neither did Erdogan expect a key regional Islamic power like Saudi Arabia — and a Sunni one to boot — to come out with such strong political and financial support for a coup led by Egypt’s predominantly secularist military.

Turkey has been in the same with Saudi Arabia and Egypt over the Syrian question but the rift between these countries and Ankara developed rapidly after the Egyptian coup. It became more prominent after Erdogan unleashed an angry barrage of invective and maledictions, laced with religious imagery, against Egypt’s new rulers and their supporters.

Although Erdogan has been more circumspect in terms of accusing Saudi Arabia directly, his remarks concerning Egypt were nevertheless noted with dissatisfaction in Riyadh and other anti-Brotherhood regimes in the Gulf that supported the Egyptian coup. Egypt, for its part, downgraded diplomatic ties with Ankara and still refuses to send its ambassador back, accusing the Erdogan government of meddling in its internal affairs.

Erdogan also fell out with Iran and the Shiite-led government of Nouri al-Maliki in Baghdad over the Syrian crisis, leaving Ankara with hardly any potential for taking proactive diplomatic initiatives aimed at trying to stabilize the turbulent region.

Turkey and Iran maintain a veneer of good ties, but continue to support opposing groups in Syria. Tehran accuses Ankara of prolonging the Syrian crisis, while government officials in Ankara say Bashar al-Assad — Erdogan’s principle regional nemesis — would not have survived so long without support from Tehran.

Turkey’s good relations with Israel — once considered even by regional governments as one of Ankara’s main diplomatic assets, given that it was on friendly terms with all parties in the Middle East — also remain at rock bottom.

These ties began to sour following Erdogan’s overt support for Hamas after he came to power. They took a nosedive after nine pro-Palestinian Turkish activists were killed by Israeli commandos when their ship, the Mavi Marmara, tried to break the Israeli blockade of the Gaza Strip in May 2010 with the tacit blessings of the Erdogan government.

Given this overall background, Turkey today is seen, from Tehran to Riyadh and from Baghdad to Cairo, as an unwelcome outside meddler in Middle Eastern affairs that has to be kept at bay. Saudi Arabian and Egyptian officials are also well-aware that Doha and Istanbul have become main hubs for leaders of the exiled Muslim Brotherhood.

These developments represent a series of blows to Erdogan’s plans to advance political Islam in Turkey and the Middle East. He is currently embroiled in what he sees as an existential struggle to ward off serious corruption charges at home, involving himself and his government, which has also pushed his Islamist agenda to the background for the moment.

Meanwhile, the gains in the Middle East by the Muslim Brotherhood started to be rolled back with the Egyptian coup, much to Erdogan’s annoyance. He is waiting for a strong turnout in the local elections at the end of this month, which he says will not only exonerate his government from corruption charges, but give him the power to fight against his enemies.

These enemies undoubtedly include the Egyptian strongman Abdel Fattah al-Sisi, whose regime he continues to vilify at domestic political rallies in the lead up to the local elections on March 30.

“Don’t forget that date is not just an ordinary one. It will also be the date when the spirit of our daughter Asma in Cairo will be beatified. Don’t forget she too was longing in Cairo for the things that we are experiencing in this country,” Erdogan told a rally in Adiyaman on March 4.

Erdogan was referring to Asma al-Beltaji, who was killed during a pro-Morsi demonstration in Cairo’s Rabia al-Adawiya Square in August 2013. Erdogan also recalled that Asma’s father, Mohamed al-Beltaji, had chanted, “Long live hell for cruel oppressors,” while he was being dragged to prison on the day his daughter was martyred.

Erdogan can be expected to continue with this kind of language, especially if he comes out strong from the local elections, thus alienating himself further from those governments that represent today’s established order in the Middle East, who consider the Muslim Brotherhood as their enemy.

Madawi al-Rasheed points out in her analysis for Al-Monitor, “The Muslim Brotherhood's base in Saudi Arabia and the Gulf in general remains the educated middle classes, a class that is destined to widen as a result of the expansion of mass education.” This suggests that time is on the side of the Brotherhood in the long run.

It is unlikely, however, that the Brotherhood will be allowed anywhere near a ballot box again any time soon in Egypt, or elsewhere in the Middle East, especially after the experience in Egypt.

Morsi’s overtly Islamist policies at the expense of other groups in Egypt after he came to power, a fact that was most apparent in the way his administration prepared the country’s new constitution, also cost him much sympathy in the West.

As long as the present Saudi regime and its GCC allies remain in power they will also ensure that Turkey under Erdogan is kept at a distance and prevented from playing a major political role in the region. They will also have support in this from principle Arab League members, starting with Egypt.

The Erdogan government’s friendly ties with Qatar and Hamas, on the other hand, will not alter the picture much. It is very likely that by the time the Muslim Brotherhood comes to a position of power again in the region, it will be too late for Erdogan, whose own position as a political player looks unlikely to survive that long.