Turkey on Defensive Over Hamas

Claims that Turkey is obstructing Palestinian reconciliation are fueling the AKP's belief in an international campaign to isolate Ankara politically at an already low point in its foreign relations. 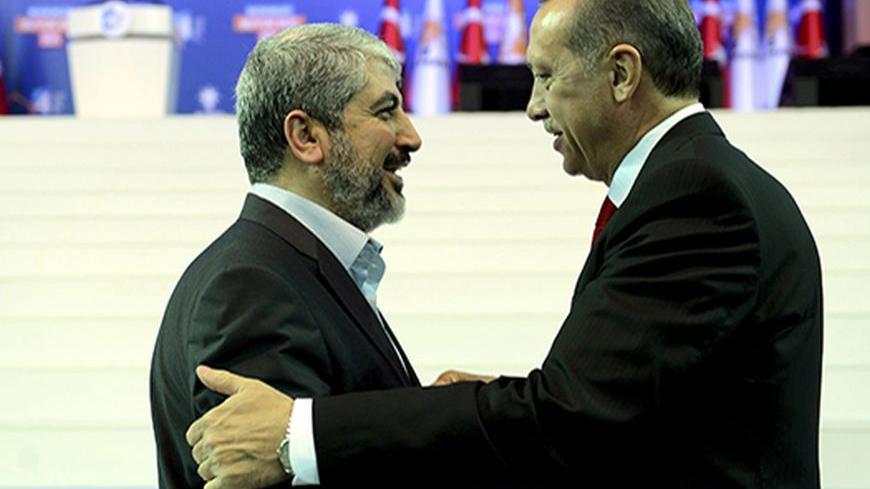 A story in the Israeli press claiming that Turkey is obstructing efforts to secure Palestinian reconciliation has added fresh fuel to the belief in Turkish government circles that there is an international campaign to isolate Prime Minister Recep Tayyip Erdogan and his government diplomatically.

Turkey already plays a minimal role in efforts to bring about a negotiated settlement to the Syrian civil war because of Erdogan’s single-track Syria policy based on the toppling of President Bashar al-Assad by force. Turkey’s lack of ties with Israel and its strong support for Hamas, on the other hand, have ensured that Ankara has no role in the Middle East peace process, either.

The latest story claiming an obstructionist stance by Ankara vis-à-vis peace in the Middle East attracted attention after it appeared in the influential Israeli daily Haaretz. It came on the heels of claims by The Wall Street Journal and The Washington Post — and later repeated by The New York Times — that Hakan Fidan, the head of Turkey’s intelligence organization known as MIT, tipped off Iran about Mossad contacts with Iranian operatives in Turkey.

Davutoglu has denied that claim, and the assumption among officials from the ruling Justice and Development Party (AKP) is that Israel is leading a media campaign against Ankara in an effort to discredit the Erdogan government and further minimize its influence in the Middle East.

AKP sources have denied the Haaretz story to Al-Monitor and claimed once again that the Israeli government is behind this as well. Senior sources at the Palestinian Embassy in Ankara said their inquiries had not come up with anything to corroborate the claims put forward in the article.

What is crucial here is that Haaretz cited the Egyptian daily Al Ahram for its story, which in turn is said to have obtained its information from Palestinian sources. Haaretz said on Oct. 21 that according to Al Ahram, Erdogan “put pressure on Ismail Haniyeh, the Palestinian prime minister in Gaza, not to present a clear plan for reconciliation with Fatah and strengthening relations with Egypt.”

When informed that it was Al Ahram that was cited by Haaretz, AKP sources indicated that they would be surprised to find an Egyptian hand in this alleged campaign against Turkey. Ties between Ankara and the military regime in Cairo have hit rock bottom following the coup that ousted Erdogan’s close ally, former President Mohammed Morsi, and his Muslim Brotherhood administration.

Erdogan was said by Haaretz to have passed on his views to Haniyeh by phone on Oct. 18, a day before Haniyeh was to deliver a speech marking the anniversary of the prisoner swap with Israel that freed Israeli soldier Gilad Shalit in exchange for 1,021 Palestinian prisoners.

“During the conversation, Haniyeh updated Erdogan on the content of the speech. Erdogan persuaded Haniyeh to make some changes, which included mentioning Palestinian reconciliation only in general terms and not presenting any plan that recognized the current regime in Egypt, since such recognition would detract from the legitimacy of the Muslim Brotherhood throughout the Arab and Islamic world,” Haaretz wrote.

This claim comes at a time when talks between Israel and the Palestinian Authority (PA) led by Mahmoud Abbas are said to be intensifying. Erdogan remains cool toward any settlement in the Middle East that is clinched over the head of his Islamist ally Hamas, which he does not see as a terrorist organization.

Ankara provides strong backing to Hamas, considering it a legitimate political party that came to power through democratic elections. This has angered not only Washington and Israel, but also Hamas’ rival Fatah, led by Abbas.

Hamas' political leader Khaled Meshaal was in Ankara earlier this month where he held three hours of talks with Erdogan on Oct. 8. The talks were also attended by Davutoglu, Hakan Fidan and Erdogan’s chief foreign-policy adviser, Ibrahim Kalin, indicating how serious Ankara considers links with Hamas to be.

Various press reports after the meeting said Meshaal had obtained a promise of financial assistance from Erdogan to pay the salaries of civil servants in Gaza. Hamas is reportedly in severe financial difficulties, especially after Cairo’s decision to close supply tunnels connecting Gaza to Egypt.

Reports also indicate that Meshaal sounded out Ankara about relocating his headquarters from Qatar to Turkey. Official sources in Ankara have not confirmed these claims and remain mum as to what was discussed between Erdogan and Meshaal for three hours.

Diplomats say that Hamas' dependence on the Erdogan government is growing as it loses its regional allies and power bases one by one. Having had to move out of Syria because of the civil war there, Meshaal is reportedly uncomfortable in Qatar, which has started providing support to the PA, the latest example being the $150 million it has decided to extend in debt relief.

Commenting on Meshaal’s visit to Ankara, an unnamed Israeli official was quoted by The Jerusalem Post on Oct. 10 as saying that Hamas today is experiencing “a period of unprecedented isolation,” and adding, in regard to Meshaal’s talks with Erdogan, “Having such a high-level meeting says more about the people hosting [Hamas] than anything else.”

Meanwhile, Hamas remains strongly opposed to efforts to restart the peace talks between Israel and the PA that had been frozen in September 2010. Haniyeh said in his Oct. 19 speech, which some claimed to have been touched up by Erdogan, that they wanted to keep all options, including armed struggle, popular uprising and political, diplomatic and media battles against Israel, alive.

It is clear that claims of obstructionism by Erdogan against this backdrop will further isolate Turkey in the Middle East, where Ankara is already at odds with Iran and Iraq over Syria, and with most of the regional Sunni powers, headed by Saudi Arabia, over the coup against Morsi and the Muslim Brotherhood in Egypt. Erdogan is a strong backer of the Brotherhood, which many of the region's established regimes consider a threat.

As to efforts by Washington to broker a rapprochement between Israel and Turkey, Erdogan has not shown any enthusiasm on this score, either, despite Prime Minister Benjamin Netanyahu’s formal apology over the Mavi Marmara incident in which nine Turkish pro-Palestinian activists were killed by Israeli commandos.

The Israeli press quoted former Foreign Minister Avigdor Liberman, a hard-liner who is currently the Knesset Foreign Affairs and Defense Committee chairman, as saying on Oct. 19 that Turkey has no intention of improving relations with Israel.

“My opposition to apologizing to Turkey is not new, and I expressed it clearly before and after it happened,” Liberman reportedly said on his Facebook page, referring to Netanyahu’s March 22 apology.

The state of Turkey’s ties with Israel is also preventing Ankara from playing any active role in the Middle East peace process, and Turkish accusations that Israel is behind the press campaign against Turkey have not helped matters. Israel has been transformed by the AKP into the all-powerful source behind every development in the region that has angered Erdogan and his ministers.

Erdogan has even come out openly claiming that Israel was behind the Egyptian coup. Hard-to-believe off-the-cuff remarks by Erdogan and his ministers about Israel, as well as high-level contacts between Ankara and Hamas, appear to make claims in the media against Turkey that much more credible for an international audience, even if these claims are untrue.

Put another way, if there is a campaign against Ankara, as AKP sources claim, it is the Erdogan government which is providing some of the fodder.