Who's Out to Get Turkey’s Spymaster?

The pressure on Turkish Intelligence head Hakan Fidan may be a sign of concern over a shift in Prime Minister Recep Tayyip Erdogan’s policies toward Syria and Iran. 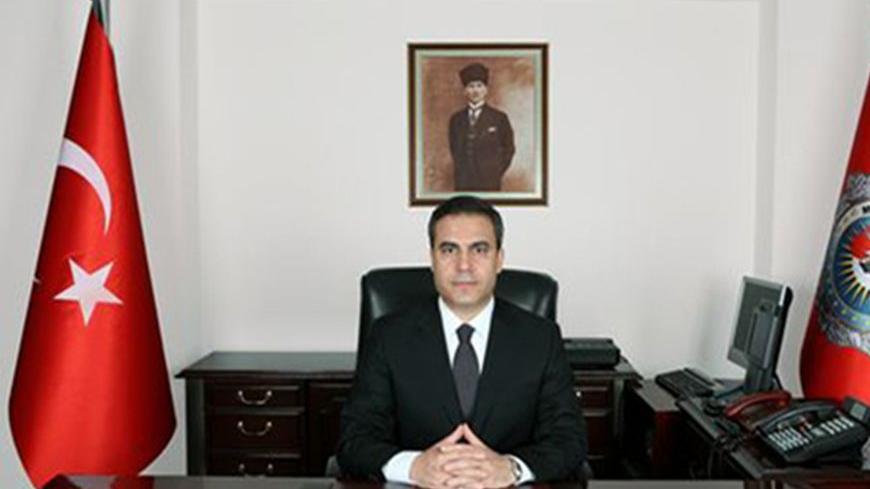 When stories about a country’s spymaster appear in the international media, they are automatically assumed to be based on information leaked with a purpose. The nature of the game, however, is that a government suspected of doing the leaking will deny any such allegation. This is the backdrop against which two recent and controversial articles about Hakan Fidan, head of Milli Istihbarat Teskilati (MIT), Turkey’s intelligence agency, must be read.

The first story appeared Oct. 10 in The Wall Street Journal under the title “Turkey's Spymaster Plots Own Course on Syria.” Citing “senior US officials,” the article claims that three years ago, Fidan had raised concerns in Washington “when he rattled Turkey's allies by allegedly passing to Iran sensitive intelligence collected by the US and Israel.” It goes on to assert, “More recently, Turkey's Syria approach, carried out by Mr. Fidan, has put it at odds with the US.” The story also quotes Jim Jeffrey, former US ambassador to Turkey, as saying that although Washington needs to work with Fidan, “because he can get the job done,” it should not assume “he is a knee-jerk friend of the United States, because he is not."

The article maintains that Fidan’s ascent as Turkey’s spymaster in 2010 was met with wariness in Washington and Israel “because of his role in shaping Iran policy,” stating, “The tension was aggravated in 2010 when the CIA began to suspect the MIT of passing intelligence, including classified US assessments about the Iranian government, to Tehran. The Journal also suggests that Fidan had been the mover behind Turkey’s arming of the radical Islamist groups fighting the Bashar al-Assad regime in Syria, another source of annoyance in Washington.

The second story, written by David Ignatius, appeared a week later, on Oct. 16, in The Washington Post. Ignatius was the moderator during the Davos International Forum panel in January 2009, when Turkish Prime Minister Recep Tayyip Erdogan, incensed over Israel’s bloody Operation Cast Lead against Gaza, told Israeli President Shimon Peres to his face that his country “knew how to kill well.” Citing unnamed Israeli and US official sources, Ignatius also claimed that Fidan had tipped-off Tehran about an Israeli spy ring in Turkey comprised of Iranians. He said this “effort to slap the Israelis” had resulted in a “significant” loss of intelligence.

It is no secret, of course, that Fidan’s appointment as head of MIT in May 2010 caused consternation in Israel. Turkish-Israeli ties, already tense because of the Davos exchange, went into a tailspin a few days after Fidan's assignment when Israeli commandos raided the Turkish aid ship Mavi Marmara as it headed for Gaza to try to break the Israeli blockade. Nine Turks were killed at point-blank range in the operation.

At the time of Fidan's appointment, the Israeli daily Haaretz reported that the Israeli defense establishment was concerned about the implications for Turkey’s ties with Israel and Iran. The worries were two-pronged: “On the one hand, that exchange of intelligence between the two countries will be harmed, and on the other, that Israel will have to limit the transfer of information to Turkey, out of a concern that it may be passed on to enemy organizations or states.”

The Journal and Post articles indicate that Israel remains concerned about Fidan and may have “further infected” Washington with its uneasiness. Asked about the Post article, State Department spokeswoman Jen Psaki was evasive during an Oct. 18 press briefing. She declared she would “not comment on specific stories,” and when pressed all she would allow was, “We work with the Turks. They’re a close ally. We work with them on a range of issues.”

Turkish Foreign Minister Ahmet Davutoglu, for his part, asserted that the claims in both papers were untrue. He added that the articles were “interesting in terms of content and timing,” but did not elaborate. Davutoglu was speaking to reporters on Oct. 17 in his hometown of Konya, where he was celebrating Eid al-Adha, the Feast of the Sacrifice.

Davutoglu contended that the allegations showed just how good a job Fidan was doing, while asserting they were simply “black propaganda.” The foreign minister did not elaborate on who might be behind the propaganda. Sources close to Erdogan’s ruling Justice and Development Party (AKP), however, automatically blamed Israel, the usual prime suspect, but pronounced that Washington was not innocent either.

Of interest, both the Journal and the Post stories indicated that no serious damage was done to Turkish-US intelligence ties despite Fidan's activities. They said top-level contacts between the Turkish and US intelligence agencies were ongoing and pointed to Fidan's prominent presence during the meeting between Erdogan and President Barack Obama in the Oval Office in May.

Ignatius wrote, “Turkish-American relations continued warming last year to the point that Erdogan was among Obama’s key confidants.” He added that the US assessment of the alleged tip-off to Tehran about Iranian Mossad spies in Turkey was a “problem of misplaced trust, rather than bad tradecraft.”

Speculation is nevertheless rife in Ankara about the articles' “content and timing,” as Davutoglu put it. Stories in The Wall Street Journal and Washington Post are taken seriously in Turkey. The assumption is that Washington and Israel are pressuring Turkey over Fidan through the media. A number of reasons have been cited, the most prominent one concerning Syria.

The suggestion is that Washington, which is already annoyed by Ankara's alleged assistance to jihadist groups in Syria, is increasingly unhappy about the Erdogan government’s one-track policy of ousting Assad by military means. The Obama administration is currently working with Russia on a diplomatic settlement that would involve the Assad regime, if not Assad himself, sitting at the negotiating table. That prospect remains anathema to Erdogan. His supporters say the articles are an attempt to discredit Fidan by linking him to Iran, because he is considered one of the main architects of Erdogan’s Syria policy.

Ankara and Tehran are currently at odds over Syria, where they are backing opposing sides, which makes intelligence cooperation between the two countries unlikely. Erdogan supporters charge that Washington and Israel are, for their current needs, resurrecting past allegations that pertain to a radically different political environment.

Diplomatic sources indicate that Fidan is also seen in Washington as an obstacle to normalized ties between Turkey and Israel and is accused of undermining efforts by the Foreign Ministry in Ankara to improve relations following Prime Minister Benjamin Netanyahu’s US-brokered apology to Turkey in March over the Mavi Marmara incident.

It is not inconceivable that Fidan, in an effort to cultivate deeper ties with Iran, may have in the past shared with Tehran information sensitive to Washington. Neither is it inconceivable following the Mavi Marmara episode that Ankara might have impulsively tipped-off Tehran about Mossad agents in Turkey as a result of the deep anger felt in Turkey toward Israel over the killing of the nine Turks.

Given the nature of intelligence agencies, the truth about why Fidan is being targeted at this particular juncture will probably not be known for some time, if ever. If the aim is, indeed, to pressure Erdogan into getting rid of his spymaster by trying to make his remaining at his post untenable after having been compromised, this is unlikely to work.

Erdogan considers Fidan the keeper of his most intimate political secrets and has said so openly. He will therefore defend him to the end. In the past, Erdogan had refused to allow a case to be opened against Fidan after it was revealed that he had held talks with members of a “terrorist organization,” referring to meetings Fidan had held with members of the outlawed Kurdistan Workers Party on Erdogan’s instruction.

Therefore, if the aim is to get rid of Fidan — and many in Ankara believe this to be true — by pressuring the Erdogan government through the media, the effort will most likely fail. The goal could, however, be warning shots at Ankara not necessarily to remove Fidan, but to rein him in. Even if that is the case, success is still not guaranteed.