Turkey’s Spymaster: The Making of a Hero

An impressive campaign by Hakan Fidan’s media team has made almost an entire nation worship him. 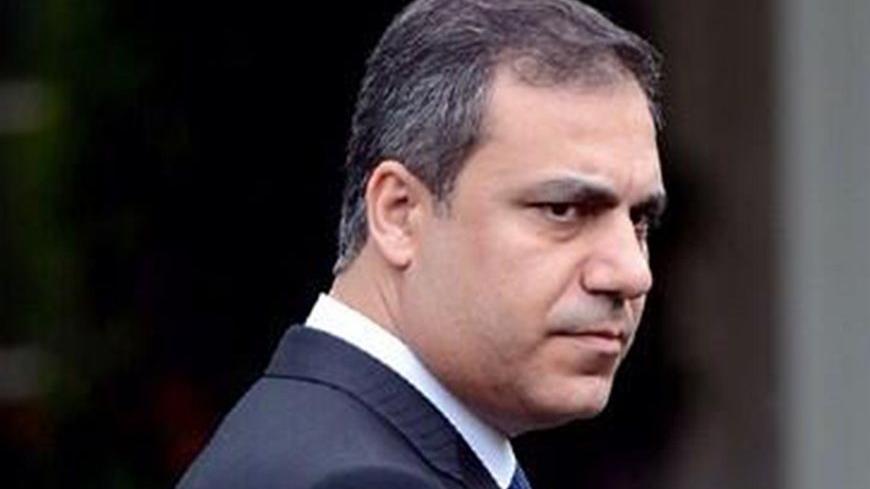 One of the numerous social media posts supporting Turkey's spy chief, Hakan Fidan, shows him in an undated picture. - Twitter/@aksciftligi

I received a text message from my Persian yoga teacher asking, “Is Hakan Fidan the new [Mohammad] Mossadegh for CIA and Mossad?” I was baffled by the comparison between the head of the Turkish National Intelligence Agency (MIT) and the former Iranian prime minister toppled by a coup initiated by British MI6 and the CIA.

In the last couple of weeks, the focus on Fidan has sharpened immensely. Indeed, Fidan was the subject of a Wall Street Journal article on Oct. 9 and an opinion piece by David Ignatius of The Washington Post on Oct 16.

In The Wall Street Journal article, there are two critical points. The first is US officials’ belief that Fidan shared US intelligence with his Iranian counterparts. The second is the suspicion that the Turkish government aids Syrian rebels, including al-Qaeda-affiliated radicals, through MIT.

Ignatius, making several references to The Wall Street Journal article, contends that Fidan, and thereby MIT, has provided the names of 10 Iranian spies who were in contact with Israeli intelligence agents on Turkish soil.

Pundits in the global and Turkish press followed The Wall Street Journal and Post’s lead as Al-Monitor contributor Amberin Zaman pointed out that Hakan Fidan had became a hot topic for analysts. Al-Monitor contributors have so far eloquently analyzed who may be out to get Fidan and how Israeli-Turkish relations are deteriorating. For my part, I will evaluate how MIT dealt with these claims domestically and how the media masterminds managed to bridge the gaps in Turkish public opinion, turning Fidan into almost a national hero.

Public opinion is a tricky matter in Turkey. Big issues such as an attack on police headquarters — a terroristic act — or an Olympic bid might fail to generate the expected “rally-round-the-flag” effect. However, in the aftermath of these two articles appearing in the international press, MIT has launched a subtle yet impressive campaign to the turn the tables. Seasoned journalist Cengiz Candar’s Al-Monitor piece elaborates in detail the flow of negative news about the Justice and Development Party (AKP) from the international press. Candar attributes the lack of domestic “critical voices” on Fidan to the festive mood of the Eid holiday.

I respectfully disagree with Candar on this precise assessment. People in the age of Wi-Fi do not give up their political passions when they are on vacation or traveling. On the contrary, because it was a holiday, almost everyone had more spare time to read the news and join in the conversation on social media. Indeed, just a simple count of opinion pieces since Oct. 16 on Fidan will prove my case.

In the Turkish print media, Fidan was on the front pages of all major papers and approximately 100 opinion pieces were penned. Almost all of these — and not just the usual pro-AKP pundits, but also from “marginal” media such as Aydinlik — stood with Fidan. Indeed, on Twitter even the most anti-AKP accounts were united in support of Fidan. Two of the highest trending hashtags were #WesupportHakanFidan and #HakanFidaniYedirtmeyiz (We will not allow you to waste Hakan Fidan).

What caused the much-fragmented Turkish public to stand by Fidan? It would not be an exaggeration to say that all the negative international press acted as a glue to seal the gaps among diverse groups. First and foremost, I would argue for the importance of another piece, published in The Jewish Press on the basis of Ignatius’ allegations. Author Yori Yanover’s following sentence had most, if not all, Turks up in arms: “If anyone deserves to find a special surprise in his car one morning, it’s Fidan, the Turkish spy chief.”

Most likely, these were the only 19 words typed  that brought the Turkish public together in unison. Even those who dislike Fidan and disapprove of the AKP were deeply offended that a “targeted assassination” of a Turkish bureaucrat had been added to the wish list. This was a clear red line for the Turks, and it backfired. In addition, the disdain for Israeli policies in Turkey goes beyond ideological lines. That is to say, it is not only the right-wing AKP supporters who enjoy Israel bashing, but also several leftists and even liberals disapprove of Israeli policies against the Palestinians and other countries in the region. That Israel and the Mossad were at the center of this news, and the perception that Israelis wish for the demise of Fidan, contributed to the rallying around Fidan in Turkey.

Fidan’s media team also deserves significant attention. From the first day of the controversy, they carried an impressive media campaign. They made sure that any accusation or criticism of Fidan was seen as pro-Israeli, and any pro-Israeli act was seen as anti-patriotic and unacceptable. This campaign for siding with Fidan has interestingly brought together a deeply divided public, maybe for the first time on such a scale since the Gezi movement. Fidan’s team managed to unite the Turkish public, which the AKP has not been able to do since Gezi.

The media campaign also managed to discredit the “Iranian agent” charges promptly. Given that the majority of Turks are concerned about al-Qaeda-affiliated factions on the Syrian border and the AKP government’s unsuccessful Syria policy, it was difficult to convince the public that the head of MIT is an Iranian agent. In a nutshell, none of the charges stuck to Fidan in this heavily anti-American and anti-Israeli environment.

The question now becomes: How was this possible? Similar stories about Erdogan and other ministers have made it to the international press and we have not observed a unified public stand. Indeed, the Turkish Public Diplomacy Directorate has faced challenges in reaching either Western audiences or non-AKP Turks. The latest joke is how formidable Turks are in winning the hearts and minds of Mauritanians.

However, Fidan employs a different team of bureaucrats to control MIT’s media relations. They have been quite competent in uniting the Turkish public around a common cause.

Next is the question: What will MIT do after this point? As an institution that has gained significant prominence over the Ministries of Defense and Foreign Affairs and secured its place domestically, I would predict MIT will launch a subtle medium-term lobbying blitz to restore the Turkish image in the United States. The AKP must know well that Turkey cannot afford to lose its reputation as a US ally and fall into the “rogue state” category. What has not beaten Fidan would most likely make him a force to reckon with in the major world capitals. The crucial question is whether reconciliation would be smoother or rougher than the current waters.

Pinar Tremblay is a doctoral candidate in political science at University of California Los Angeles and an adjunct faculty member at California State Polytechnic University, Pomona. She has previously been published in the Hurriyet Daily News and Today's Zaman. On Twitter: @pinartremblay