Turkey: The Self-Fulfilling Prophecy Of the Hakan Fidan Story 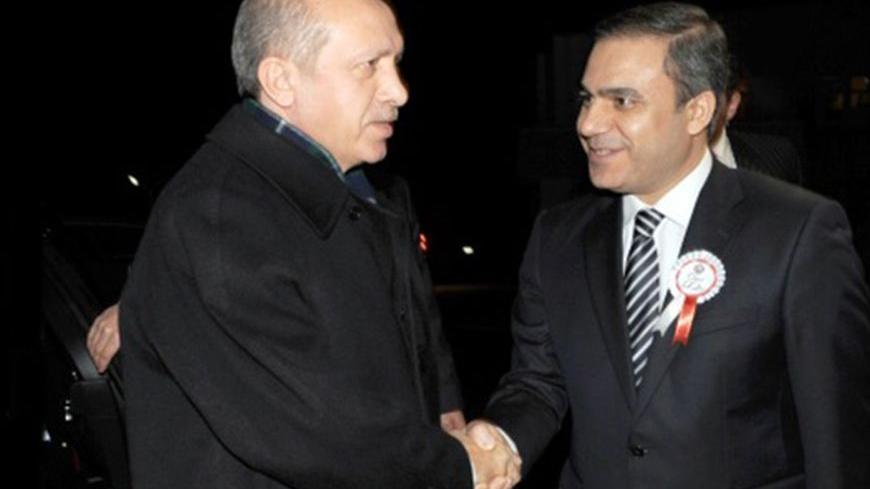 Turkey is just emerging from the lethargy of a 10-day-long holiday thanks to combining Eid al-Adha with weekends. Tens of thousands of Turks went abroad or traveled inside their home country. During the holiday, Turkey’s polarized and tense political atmosphere also took a vacation despite one event after another that would have otherwise created a furor. The cause of these developments was reporting by influential and important Western newspapers.

First, there was a news report on Oct. 10 in The Wall Street Journal by two writers who charged that Turkey had been supporting radical Islamist groups attacking the Kurds in northern Syria despite warnings by the United States. The writers gave the impression that they had had access to what was discussed at the May 16 meeting in the White House between President Barack Obama and Prime Minister Recep Tayyip Erdogan. The foreign ministers and intelligence chiefs from both countries participated in the meeting. The article focused primarily on criticism of Hakan Fidan, Turkey’s intelligence chief, who is known to be Erdogan's most important confidant. The authors claimed that Fidan was privy to Iranian intelligence targeting Israel.

When the Journal published its analysis, Turkey was in a holiday mood for a holiday that had not yet begun. Nevertheless, there were quick reactions from Turkey contending that the real target was actually Erdogan, via Fidan.

Before that dust settled, the real bombshell arrived from The Washington Post on Oct. 16. David Ignatius, one of the most respected, veteran op-ed writers in the American press, quoted unnamed sources asserting that Turkey had warned Iran about 10 Iranians whom Israel intelligence had recruited in Turkey. In short, Turkey was accused of selling out Israel to Iran, dealing a monumental blow to Israeli intelligence.

The International New York Times (formerly the International Herald Tribune) on Oct. 17 went with the title “Report That Turkey Exposed Spies Strains Its Relations With Israel” for a Jerusalem-datelined report by Isabel Kershner. The article conveyed the views of former Mossad chief Danny Yatom, Israeli Deputy Foreign Minister Zeev Elkin and an unidentified senior Israeli official about the Post report. Here is, in part, what Yatom had to say: “Turkey, which shares borders with Iran, Iraq and Syria, among other countries, once served as ‘a convenient place for Israel to work to reach people from hostile countries,’ Mr. Yatom said. But while there had been ‘outstanding’ cooperation in earlier years between Israel and Turkey, Israel now is ‘not open with the Turks, as we were in the past,’ he said. Mr. Yatom added, ‘We are suspicious of the Turks that they relay information to Iran that can endanger us.’”

It is hard to gauge the resonance of Ignatius' bomb among the general public, but pro-government newspapers and writers responded immediately with return fire. Sabah did not fail to note that Ignatius was of Armenian descent, of which many people are unaware. Almost all the reactions recounted that Ignatius had been the moderator of the Davos panel when the Turkish prime minister and Israeli President Shimon Peres engaged in a tense exchange that entered into the Turkish political lexicon as the “famous one-minute episode.” That event is considered the beginning of the deterioration in Turkish-Israeli relations.

During the panel, after Peres replied to Erdogan’s strong criticism of Israel following its 2009 attack on Gaza, the Turkish prime minister wanted the right to reply. Ignatius tried to avoid giving Erdogan the floor, so he could wrap up the meeting and they could all go to lunch, Erdogan grabbed Ignatius’ arm, and uttered, “One minute,” in English. He then proceeded to deliver a stern response in Turkish before stalking off the stage in protest against Israel. This is why there should be no surprises about enraged reactions from Turkey when such a news report is published with an Ignatius byline, especially following on the Journal report. The perception that Fidan was treated as Erdogan’s Achilles' heel and that the real target had been Erdogan himself gained credence in government circles after the Post article.

Reaction was not only limited to pro-government media and writers. Foreign Minister Ahmet Davutoglu, speaking to journalists in his hometown of Konya, alleged, “This is black propaganda against Turkey.” An adviser to the prime minister, in a widely printed quote, said the Journal and Ignatius articles amounted to “psychological warfare.”

As the trauma of the Ignatius article continued to circulate, or as journalists would say, before the ink had even dried, the international, influential and reputable Financial Times reported on Oct. 17, in a front-page story by Daniel Dombey, that Turkey had given up on a number of ambitious mega projects, including the third airport for Istanbul. The appearance of such a report on the front-page of the Times was seen as detrimental to foreign investor confidence and, combined with the other reports, deemed as adding insult to injury.

Dombey, unlike the Journal and Post writers, is a well-known name and has been living in Turkey for a long time. He has never had a report for the Times denied or challenged. This time, however, he couldn’t shield himself from the wrath of the ruling quarters. Dombey did not appear to be repentant, as on Oct. 20, his article titled “Doubts Rise Over Turkey’s Ties to the West” appeared online at FT.com.

He led off with the question “Has Turkey, a member of NATO for 61 years, parted company with the west? It is a question Turkey’s allies have begun to face.” Dombey then elaborated on the background of recent debates: “Three issues have converged to create the doubt: Ankara’s decision to buy a Chinese missile defense system; its alleged ambivalence towards al-Qaeda-affiliated fighters in Syria; and, most recently, allegations that Turkey betrayed Iranians spying for Israel to Tehran.” He concluded by providing Turkey the benefit of the doubt: “The way Turkey has responded to these three controversies: its insistence that the missile purchase is not a done deal, its condemnation of jihadists and its fulminations at the allegations of collusion with Iran all indicate a country that values its Western alliances. But with these ties now in question, it will be actions, not words that count.”

These reports, coming as they did, one after the other, act as self-serving prophecy for the conspiracy theorists who believe the Western powers, led by Israel, are scheming to oust Erdogan from power and are stepping up their efforts as the 2014 elections approach.

These theorists, Erdogan among them, of course, had opted to explain the two weeks in June that shook Turkey to the core as a plot to prepare the ground for a military coup or a scheme of the “foreign interest rate lobby” and so on. Among them was a manager of a television channel who seriously asserted that Erdogan would be assassinated through telekinesis and voiced the fantastic claim that Germany and Lufthansa were behind events in Istanbul because they feared the Frankfurt airport losing its hub status with the construction of the third Istanbul airport. He was rewarded shortly thereafter with an appointment as “head adviser” to the prime minister.

Two weeks after the brutal suppression of events in Istanbul's Gezi Park, Gen. Abdel Fattah al-Sisi, in a military coup, removed the Egyptian government led by the Muslim Brotherhood, which Erdogan strongly supported. This was enough for many sane people to see the growing collection of nonsensical claims as self-fulfilling prophecy. The articles in The Wall Street Journal, The Washington Post and Financial Times constitute a second wave. This time, the counterclaims are not as absurd as the ones about who and what was behind the Gezi protests. It is certain, nonetheless, that they will also serve as self-fulfilling prophecy for the Turkish government.

Cengiz Candar is a columnist for Al-Monitor's Turkey Pulse. A journalist since 1976, he is the author of seven books in the Turkish language, mainly on Middle East issues, including the best-seller Mesopotamia Express: A Journey in History.