The war between the AKP and its former de facto partner, the Gulen community, is heating up amid reports of government plans to shut prep schools, a sector where Gulenists are hugely influential. 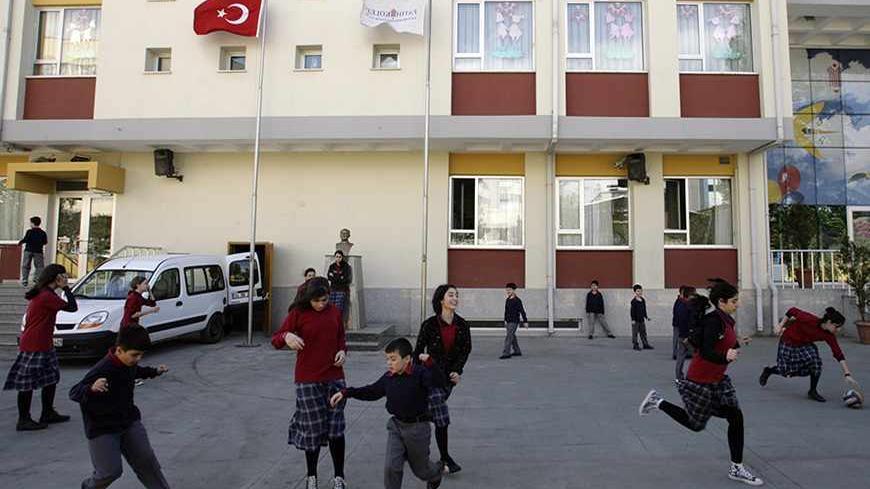 Children play at the garden of Fatih College in Istanbul, April 16, 2008. - REUTERS/Osman Orsal

The de facto ruling coalition between Prime Minister Recep Tayyip Erdogan’s Justice and Development Party (AKP) and the Fethullah Gulen community has devolved into a war, which is now in the open. The Gulen community was instrumental in ending the political tutelage of Turkey’s Kemalist-Republican military and senior judicial bureaucracy through a series of police operations and mass trials from 2008 to 2011, as well as administrative and constitutional measures. The row, which flared occasionally in the past two years, has grown into an open war, with the sides hurling veiled threats at each other, after it emerged that the government is planning to shut down Turkey’s prep schools, a major source of financial revenues and human resources for the Gulen community.

The spark that fueled the war was a scoop that the Zaman daily, the flagship of the Gulenist media, published coverage on Nov. 13 about a draft law indicating that the AKP is readying to close down the prep schools in the 2013-14 school year.

Why do the prep schools matter? University and secondary school admissions in Turkey are determined through nationwide centralized exams, since the total number of students hugely outnumbers school capacity. The fierce competition has been coupled with a chronic quality deficit at public schools. Thus, the establishment and growth of private schools preparing students for the exams has become inevitable.

The Hizmet (Service) movement — or the Gulen community, as it is widely known in Turkey — owes its domestic clout mainly to the thousands of prep and regular schools it began to open in the 1970s. Since then, it has grown into a global sociopolitical Islamic movement thanks significantly to the schools it also opened around the world.

The de facto coalition between the AKP and the Gulen community began to creak on Feb. 7, 2012, when a special-authority prosecutor dealing with terrorism and organized crime in Istanbul summoned the head of the National Intelligence Organization (MIT), Hakan Fidan — considered to be one of Erdogan’s most trusted men — for questioning on suspicion that he and MIT were linked to activities of the Kurdistan Workers’ Party (PKK). Erdogan saw the move as a direct political attack against himself. The government and the public opinion widely believe that members of the Gulen community, who hold key positions in police intelligence and the special-authority courts, were behind the move. The community, meanwhile, has failed to offer convincing arguments to dispel this strong perception.

The crisis had erupted as a result of a power struggle between intelligence services and their bosses, which included disagreements on how the Kurdish problem should be handled.

So, the incident that went down to Turkish political history as the “Feb. 7 MIT-judiciary crisis” cracked the vase. And that vase is now in smithereens, yielding to the pressure of ensuing tremors.

Here is a summary of what happened after Feb. 7:

The government dismantled the Gulen community’s cadres in the police intelligence services, shifting officers known as Gulenists to passive positions.

The special-authority courts, believed to be dominated by Gulenist judges and prosecutors, were abolished, with the amendment taking effect once the courts wrapped up the cases they were handling.

The government shielded MIT chief Fidan against the judiciary through legal amendments. It is no longer possible for prosecutors to take any action against Fidan without the prime minister’s permission.

AKP quarters, meanwhile, circulated reports about a plan to close down the prep schools in a bid to intimidate the Gulen community and keep it under pressure.

The relations exacerbated further because of the conspiracy-prone mindsets and perceptions, quite typical in the political culture of Turkey’s Islamic quarters. On Aug. 14, the Journalists and Writers Foundation (GYV), the main civic group that speaks publicly on behalf of the Gulen community, released a statement implicitly accusing AKP quarters of spreading “slanders” on social media and behind the curtains that “the Gulen movement was behind the Gezi Park protests.”

The community faced similar conspiracy accusations from AKP quarters when The Wall Street Journal and The Washington Post claimed that MIT and Fidan had harmed US and Israeli interests, in articles published a week apart, on Oct. 10 and Oct. 17 respectively. The first article was a profile of Fidan, which included quite critical allegations about Turkish intelligence activities concerning Syria. The second article alleged that MIT had disclosed to Iranian intelligence the identities of 10 Iranians who worked for Israel’s Mossad.

As both stories made the headlines in Turkey, AKP quarters fumed at newspapers close to the Gulen community for even quoting the reports. This time it was Today’s Zaman that faced accusations of being a collaborator in an international conspiracy against Turkey and MIT.

In an Oct. 20 article titled “Is this the new Turkey?” the daily’s editor-in-chief, Bulent Kenes, wrote that they were under a social media attack, mounted by a “virtual militia” of thousands of people mobilized by AKP advisors he described as “legionnaires.”

Finally, the latest spat broke with Zaman publishing the draft law on the closure of prep schools. The daily carried the report on its front page under the headline “Huge blow to education.”

According to Zaman, the prep schools will have to be converted to regular high schools or face closure, if the draft law is passed in its current form. The daily says only 263 of the existing 3,100 prep schools could transform themselves to high schools, which means that the overwhelming majority would have to close. Those which do not comply with the law would face heavy fines of at least 500,000 Turkish lira ($250,000).

The Sabah daily, known to be close to the AKP, responded to Zaman on Nov. 15 with a front-page story, titled “Black propaganda about prep schools.” The education minister branded the Zaman report “a campaign of obvious lies and provocation.”

The same day, Zaman appeared with a front-page headline that declared the law to be “unprecedented even in military coup eras.” Later in the day, an audio recording of the community’s spiritual leader, Fethullah Gulen, was released on the hergul.org web site, which routinely carries his talks. Gulen, too, likened the closure plan to the oppression of military coup eras. “We’ve been through that since the 1960 coup; we’ve been slapped in the face. We’ve been through the 1970 coup and got kicked. We’ve been through the 1980 coup and got kicked again. But the scores are now being settled with those who slapped and kicked us,” he said.

Gulen was widely thought to be likening the government to a “pharaoh” in his ensuing remarks. “If people concerned with mundane interests in every realm are against you, if the Pharaoh is against you, if Croesus is against you, then you are walking on the right path. … It’s very important to clench your teeth when calamities are coming down on you like a sledgehammer,” he said. The community, meanwhile, is waging an extensive social media campaign against the closing of the prep schools.

It should be noted that the prep schools are not a matter of public debate in Turkey. The people have no negative perception of or complaints against those institutions. Thus, it is not possible to argue that the government’s plan to shut the schools is a move to meet a popular demand. So, the only other argument is that the government’s motivation is to punish the Gulen community.

Government ministers have so far reacted in a low-key manner to the community’s indignation. In a TV interview on Nov. 14, Education Minister Nabi Avci denied they were working on a draft law like the one reported by Zaman, saying that the objective was to gradually transform the prep schools into high schools. Deputy Prime Minister Bekir Bozdag, for his part, said the issue was not a hastily decided step but has been on the government’s agenda for three years.

Well, how will the row play in the upcoming municipal election?

GYV Chairman Mustafa Yesil answered this question in an interview published in the Taraf daily Nov. 16. “I think the closure of the prep schools will seriously accelerate emotional estrangements in the country. It would have an impact in the sense of stoking the emotional estrangement. [Closing the prep schools] would mean, so to say, that you are eradicating my workspace, that you are blowing up the livelihood of my children without offering any solution,” Yesil said.

Asked whether the community would no longer vote for the AKP, Yesil said, “It is not in the sense that this would determine whether the Hizmet movement will or will not support a given party. It should be rather seen in the sense of individual estrangements.”

So there is a growing expectation that the Gulen community will make the AKP feel its negative power in critical provinces and districts in the March 30 municipal elections.