The row over private tutoring halls between the Justice and Development Party (AKP) and the Gulen community is just a smoke screen in their power struggle over controlling the state. 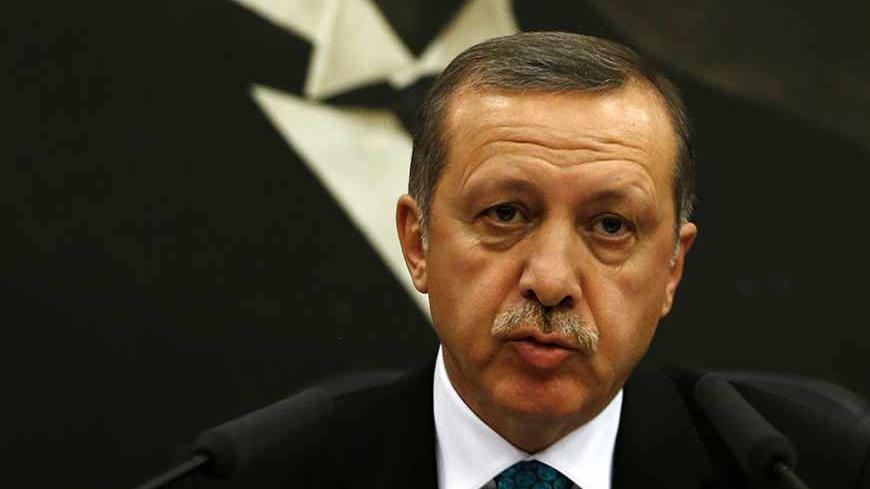 Turkish Prime Minister Recep Tayyip Erdogan addresses the media as he sits in front of a portrait of Mustafa Kemal Ataturk, founder of secular Turkey, at Esenboga Airport in Ankara, Nov. 21, 2013. - REUTERS/Umit Bektas

A rough political row is simmering in Turkey. The sparring sides, however, are not two political parties as it would have been in a normal democracy. Because Turkey remains an abnormal democracy — one of the sides is a political party, while the other a religious community. Prime Minister Recep Tayyip Erdogan’s Justice and Development Party (AKP) has locked horns with the Hizmet Movement — or “the Community” as it is widely called in Turkey — of Islamic preacher Fethullah Gulen. A fierce propaganda war is under way, especially on social networks. The government’s plan to close down private tutoring halls, the spark that ignited the current row, is just a smoke screen. The real struggle is about who will rule the state.

Let’s briefly review the chronology of the conflict.

On Feb. 7, 2012, Istanbul special-authority prosecutor Sadrettin Sarikaya issued summonses for National Intelligence Organization (MIT) Chief Hakan Fidan, his predecessor Emre Taner and MIT’s former Deputy Chief Afet Gunes, to question them in a probe into the Kurdistan Communities Union (KCK). The move marked the onset of the biggest ever crisis between the AKP and the Gulen community.

The crisis escalated when it emerged the prosecutor planned to question the MIT officials over secret talks held in Oslo between MIT and the Kurdistan Workers’ Party (PKK). The prosecutor would have probably arrested Fidan had the government not intervened. Sarikaya was removed from the probe and laws were amended to shield the MIT officials.

On Aug. 13, the Journalists and Writers Association — which speaks publicly on behalf of the Gulen movement — issued a statement to deny 11 allegations targeting the Community, including a claim it was behind the Gezi Park protests. The 11 allegations were in fact painting the outlines of the conflict between the government and the Community. The statement stressed the Community was not involved with any political party.

In mid-November, Zaman daily ran a front-page story claiming that the Ministry of Education was working on a draft law under which all private tutoring halls and study centers would be shut in the shortest possible time. Without denying the report, the ministry said: “Fabricated elements have been inserted into the story to mislead the public.”

Gulen’s initial reaction to the closure plan was harshly worded. He evoked military coup eras and told his followers, “If the pharaoh is against you, then you are on the right path.” Later, he moderated his tone.

The tensions, simmering in the media and on social networks, spilled over last week even to the highly popular Sefkat Tepe series on Samanyolu TV, a channel close to the Community. Cuneyt Ozdemir, a leftist journalist linked neither to the AKP nor the Community, quoted dialogues between members of the Dark Council, the fictional body pulling the strings of the AKP and Turkey in the series, as they discuss plots to undermine the Community. “One is truly astounded,” Ozdemir concluded, borrowing one of President Abdullah Gul’s most popular tweets. Here is how the fictional conversation goes:

“Sir, we’ve drawn up the plan you requested about politicizing the Community. We’ve outlined two models. The first is based on the assumption that the Community enters politics, while the second is based on rumors they will collaborate with the opposition. With the help of our friends in the media, we will create confusion both in the public opinion and the Community’s support base. We are keeping the Community under pressure in the print and visual media and especially in social media through the friends we control there. We’ll stir it up even more and give them a hard time. Even the front-page headlines we’ll get published in the newspapers are ready. We need only a signal flare.

"Gentlemen, once the tutoring halls issue is wrapped up, the student homes will be next in line. The student homes have been the breeding ground for devout youths in this country since the 1960s. In fact, they are not student homes but only homes inhabited by students."

"How are we going to sell this to the people, sir?"

"To convince the populace, you will draw a distinction between the homes of ordinary people and students. You’ll make people believe that the latter are places of dubious values. This is how we’ll succeed in dismantling those homes, which are such a trouble for us.”

The dialogue, as Ozdemir pointed out, is deprived of intellect, a ridiculous propaganda implying that even Erdogan’s outburst against male and female students sharing homes was in fact a pretext to clamp down on the Islamist student homes the Community runs.

Now let’s see the analysis of the rift from the Kurdish camp. Yavuz Cobanoglu — a Tunceli University scholar and author of the book In Pursuit of the Golden Generation: Fethullah Gulen on Society, State, Morality and Authority — argues that the AKP has reached a point where it no longer needs the Community, neither intellectually nor politically.

According to his argument, shared by many independent analysts, the AKP now has its own institutional structures to prop it up intellectually and is no longer concerned about losing votes.

“The AKP-Community relationship used to be always reciprocal. The government made use of the Community’s social base and media clout, while the Community easily achieved its interests — public office positions, public tenders and so on. Once the AKP asserted its political hegemony — and it is only natural for a democratically elected party to control the state apparatus — the Community became redundant,” Cobanoglu says.

He further observes, “When the prosecution summoned Hakan Fidan [with an intention] to arrest him, an astounded AKP realized for the first time how much the Community had grown and what it was capable of doing. That was essentially the moment when the process of dismantling [the Community cadres] began.”

According to Cobanoglu, the AKP leadership had a further incentive to move against the Community: It feared the Community could maneuver to nominate its own candidate to chair the AKP after Erdogan, either clinching the post amid political rivalries or splitting the party.

“I believe the merger of HAS [People’s Voice Party] and the DP [Democrat Party] into the AKP also had to do with the dismantling of Community cadres. HAS, if not the DP, was the only political gravity center that could have embraced those who were being purged. No doubt, there is also the aspect of 'opening room.' … The gradual dismantling of Community cadres eased the pressure the AKP felt from its support base for public jobs, public tenders and especially for bureaucratic positions,” Cobanoglu says.

He argues that Gulen and Erdogan were never on good personal terms in the first place: “Barring the courtesy of their formal relations, Gulen — as much as I can gather from his writings — is very unlikely to hold a favorable view of Erdogan as a leader. Similarly, Erdogan probably sees Gulen as a political 'failure.' Gulen has repeatedly expressed his dislike [of Erdogan], though in a veiled manner. Whenever he used terms such as 'turning into a pharaoh' or 'hubris' or 'egoism' in historical context, he was in fact depicting the present day and the prime minister.”

“The Gulen movement’s support for the AKP government was initially huge, peaking at the constitutional referendum on Sept. 12, 2010. The AKP was quite tolerant of the movement during that period. But then, following the Mavi Marmara incident, their organic bond gave way to a cautious dissociation. Mavi Marmara was a milestone in the ‘politics-community’ equation. The Israel and Iran factors drove the two sides into a strategic estrangement. The Gulen movement may not say it openly, but it is critical of the government for being tough on Israel and soft on Iran.”

“Unfortunately, the conflict between the AKP and the Community is now a public fact. I wish it never happened. The tough rhetoric of the sides is stoking the tensions. The AKP emerged as an outcome of the February 28 process. The main problem between the AKP and the Community dates back to February 28, 1997. The Community’s partial silence at the time led to a fracture within the religious quarters,” Bayraktar says.

She notes that subsequent disagreements on major political issues resulted in the current rift, pointing to “Gulen’s assertion after the raid on the Mavi Marmara that 'a permission should have been taken from the [Israeli] authorities,' [the Community’s] discontent over tensions with Israel following Erdogan’s 'one minute' outburst and finally their reluctance to back the [Kurdish] peace process.”

“AKP supporters or AKP members did not start the conflict out of the blue. Some of the Community’s media organs and writers attacked and accused the AKP, and the AKP, in turn, had to defend itself. And those from the Community who would make appeals to 'put out the flames of discord' were unfortunately the same people who fanned the discord behind the scenes,” Bayraktar says.

She adds, “The private tutoring halls should be closed because they create duality in education, causing public school teachers to fail, consume students’ time and create inequality. Educational reform is certainly needed, but the people employed at tutoring halls should not be victimized in the process.”

Bayraktar comes to the following conclusion: “To defuse the tensions, the Community should lend support to the peace process and the AKP should lend an ear to the Community. The tension must come to an end, otherwise it will harm us all. I hope and pray that it all ends well. If the Community loses, so does the AKP. If the AKP loses, so does the Community. Disagreements are natural and discussing them is natural, too. But in the process we should not forget that we are brothers and sisters. One should not succumb to community or party fanaticism, but learn lessons from criticism without seeing the critic as an enemy.”

Well, how will things play out? The AKP’s governance of the state will only be natural under the rules of democracy. The AKP does not want a partner in governance. In my view, the Community will retreat to the civic realm after a while and that is how a compromise will be reached. But the era of co-governing the state is over. That is crystal clear.