The battle between Erdogan's party and Gulenist elites shows that cooperation with the Gulen Movement is no longer worth it to the AKP. 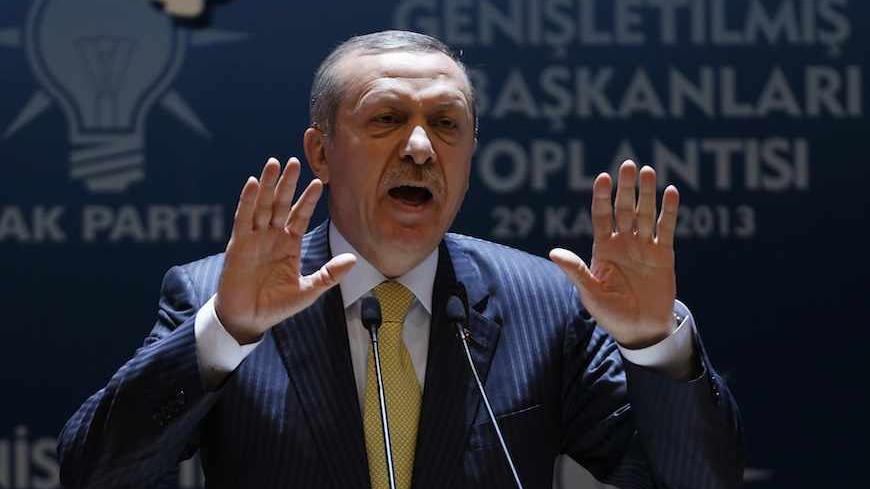 On Nov. 25, former soccer player Hakan Sukur, who is now a Justice and Development Party (AKP) parliament member, tweeted his concerns about the tensions between his party and the Gulen community (also known as Hizmet, meaning "service," and Cemaat, meaning "community"). Sukur explained that he has been a part of the Gulen community for over two decades and argued it was wrong to close private tutoring halls. This was courageous considering another parliament member, Idris Bal, known for his close relations with the Gulen community, is about to be expelled from the AKP. Bal was heavily criticized for his outspoken report on Gezi protests, but his firm stand against the closure of tutoring halls was the last straw.

Al-Monitor’s Turkey Pulse contributors have explained the issue in detail from different perspectives. Kadri Gursel’s piece deserves credit for portraying such a complicated case in an independent manner. It is worth noting that the tutoring hall issue is important for the Turkish public on its own. Professor Ozer Sencar shared with Al-Monitor the most recent survey results conducted by Ankara-based Metropoll Strategical and Social Research Center on the issue of tutoring halls. A November 2013 survey indicates that the majority of Turks believe the halls are necessary. About 57% of the population opposes the closure of the tutoring halls by government decree. In September 2012 only 44% were against the idea. In addition, when asked if the decision was to reshape the education system or to punish the Gulenists, the public is deeply divided: 39.3% say “to reshape the education system,” 23.3% say “to punish the Gulenists” and 37.4% have no comment.

After talking with quite a few distinguished names from both ends of the battle, I aim to clarify two main misperceptions:

The "AKP vs Gulen community" myth

This argument starts with the fact that the AKP and Gulen community stem from different Islamic traditions. The AKP is based on Naqshibandi school, which formed Milli Gorus (National View), while Gulenists belong to Nurcus. This view also believes that the Gulen community stands in political opposition to the AKP. While the first historic fact is correct, we need to consider that both the AKP and the community have evolved in the last decade, or since they have formed a tacit coalition in 2002 when the AKP assumed power in Turkey. Over time, working intensely together, it is difficult to figure out where the true loyalties of many people lie. The community’s strength comes from its ambiguity as well. The members are not card carriers or uniformed disciples. Almost all community sympathizers are AKP voters. Many have dual loyalties. That is why there are repeated calls from both sides to end this “bitter quarrel,” which pleases “secular” or “white” Turks. The base of these two entities have morphed into each other.

The community has served to solidify the AKP’s power base. At a time when both agreed on minimizing the Turkish armed forces’ political power, the system was able to generate mutually beneficial outcomes. However, as Erdogan crossed out more internal opponents from his blacklist, his need for the community decreased.

Currently, 12 to 15 parliament members from the AKP are estimated to also be members of the community. As Turkish Prime Minister Recep Tayyip Erdogan asked, “What did they ask for that we refused?” Today, many AKP members explain in print or on social media that Erdogan was generous to the community, and its members gained prominent positions in bureaucracy. Even though Erdogan’s signature appeared on a document from the 2004 National Security Council meeting that agreed to curtail the activities of the community, pundits agree that Erdogan signed this unwillingly, and the events that took place afterward stand as verification of this statement.

Erdogan has not acted to “terminate” the community, but rather opened several parts of the public domain to encourage its activities. Erdogan and his men have participated in several exclusive community events. Indeed, AKP parliament member Samil Tayyar tweeted on Nov. 28, “Yeah, right. The AKP decided to finish off the community in 2004. Then, the police forces came under the rule of the community, the number of community schools and tutoring halls exploded and the AKP came under scrutiny to be shut down.”

There are several points of contention here. First, the community never posed political opposition for the AKP or anyone else. Rather, the community is known for its pragmatism and adaptability to work with the existing government. Second, the relationship that started as a coalition turned into a competition at the top levels. For the last three to four years, the intense competition and bargaining that has been carried behind closed doors is becoming more visible. The visibility increases the audience costs for the AKP — at least, this is what community elites hope. This brings us to the second myth:

The AKP will suffer significant loses if it dares oppose the community.

This statement has now become a threatening slogan. Since local elections are scheduled for March 2014, and the Gezi movement has clarified the undeniable strength of resentment against the AKP government, pundits argue that the community’s voting block is too precious to risk. This myth is dubious on two levels. First, it assumes the voting base of the community has a political alternative. It does not. There are no other Islamic parties that could stand as an alternative to the AKP. As I explained in August 2013, Erdogan has skillfully co-opted possible Islamist political factions into his party. He has also mastered instilling fear into pious Muslim hearts that if he loses power, their religious rights would be lost at once under any other political regime. Second, even if the AKP were to lose some part of the community’s vote, this myth assumes the community’s support comes for free. That is not the case. As seen with Tayyar’s taboo-breaking tweet, the AKP has made significant concessions — most still unknown — to the community. If the AKP does not have to promise the “perks” to the community, then it can allot them to “other groups,” hence gaining further votes.

Most likely, Erdogan will scale back his concessions to the community, but not close down the tutoring halls. Several names of individuals in the Gulen Movement must be on Erdogan’s blacklist for attempting to expand their political power while the AKP was struggling with the Gezi protests. Some outspoken community members may be punished with traditional AKP methods — for example, by losing their positions. But precisely because of the first myth outlined above, Erdogan will not be able to separate his government from the influence of the community.

While ordinary citizens watch this battle with curiosity, the spoils system in Turkish politics is sadly still the norm despite the rhetoric of “advanced democracy.” Positions in parliament, bureaucracy and even the police force are distributed as favors by the ruling party. Judging from Erdogan’s and other prominent figures’ remarks, merit plays little role in achievement in Turkey. Your career is determined by whether you are on a "good" list or a black one. While the majority of the public sees the intense fighting between the two groups, no one is able to question the extent of corruption or how to establish a credible political opposition to heal the system.