Has Turkey’s Gulenist witch hunt spiraled out of control?

The Turkish government’s post-putsch witch hunt is seeking to eliminate Gulenists from both government offices and public life, pushing the limits of rationality and upending hundreds of thousands of lives. 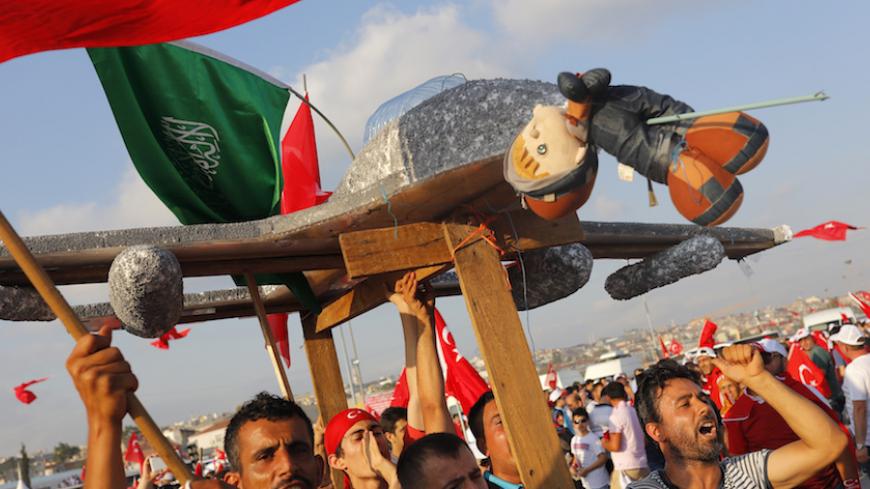 Turkish drivers with license plates bearing the “FG” letters have recently fallen under suspicion of being members of a terrorist organization for the simple reason that the two letters signify the initials of Fethullah Gulen, the US-based Turkish cult leader who, by a large consensus, is the instigator of the July 15 coup attempt.

In an Aug. 22 story about the license plate hunt, the mainstream daily Hurriyet reported the following on its website: “An inquiry has been launched into all ‘FG’ license plates on the grounds they denote the initials of terrorist chieftain Fethullah Gulen. The ‘FG’ license plates, issued in 2014 by the directorate-general of police, are being examined as part of the investigation. All private and public vehicles with ‘FG’ plates across Turkey will be examined to determine whether their owners are linked to the terrorist organization.”

As in many other countries, drivers in Turkey can pay to have vanity plates. In most cases, the sequence of letters that follows the two-digit province code forms a meaningful acronym, like the name of a soccer club. GS, for instance, stands for Galatasaray, and FB for Fenerbahce. AK has become another popular acronym in recent years, suggesting the vehicle’s owner is a supporter of the ruling Justice and Development Party (AKP). So this, in fact, is an expression of identity. Some drivers would also have their own initials on the plate.

Many, however, can end up with a meaningful acronym on their plates by mere coincidence, without any relation to what the letters denote. Yet the Turkish authorities seem to have ruled out the probability of F and G coming together randomly, probing all vehicle owners with “FG” plates for possible links with the Gulen movement, dubbed in Turkey as the Fethullah Gulen Terror Organization (FETO).

The term “FETO” entered the government’s lexicon after prosecutors in Konya used it in an indictment a year before the July 15 putsch in reference to Gulen’s congregation, which until then was called “the Congregation.” The government’s efforts to ascribe the congregation a new, negatively loaded name finally bore fruit in the wake of the putsch, as both the political opposition and large segments of society adopted the usage of “FETO.” This is the result of a broad consensus in all political, societal and media quarters, barring the Gulenists, that the coup attempt was the work of a Gulenist network in the military.

It is under these conditions that the crackdown on the Gulen movement has progressed since July 15, and the hunt for “FG” license plates suggests the witch hunt is now spiraling out of control into hysterical proportions.

In another sign to that effect, the FETO probe has extended to a popular comedian and former soccer stars known to be close to Gulen’s congregation. Chief among them is Hakan Sukur, the internationally acclaimed former scorer of Galatasaray and the national team. His Gulenist affiliation was never a secret and was not an obstacle in winning a parliamentary seat on the AKP ticket in 2011, when the ruling party and Gulen’s congregation were still allies. After the alliance collapsed and devolved into an open war in late 2013, Sukur quit the AKP and two years later moved to the United States. On Aug. 16, an Istanbul court decided that Sukur’s social media posts constituted a reason to suspect he belonged to “an armed terrorist organization” and issued an apprehension warrant to question him. Three days earlier, the judicial authorities had arrested the soccer player’s father, Selmet Sukur, and ordered the seizure of all his assets, using powers made available by the state of emergency.

As this article was being written, news broke of detention orders for three other former Galatasaray players with Gulenist affiliation — Arif Erdem, Ugur Tutuneker and Ismail Demiriz — again for suspected membership in FETO.

Popular comedian Atalay Demirci, meanwhile, was detained earlier this month after “his correspondence with Hakan Sukur was exposed.” He was then jailed pending trial on charges of FETO membership.

Another troubling practice has been the roundup of relatives of suspected fugitives. A striking example is the Aug. 22 detention of 12 relatives, including brothers, nephews and a brother-in-law, of US-based Cevdet Turkyolu, said to be a “super imam” or a top leader in the Gulenist network. The brother of Bulent Kenes, the wanted former editor-in-chief of the now-defunct daily Today’s Zaman, and the wife of Bulent Korucu, another fugitive Gulenist journalist, have also landed behind bars.

Whatever the reason, arresting the relatives of fugitives creates the impression that the authorities have little concern for the principle of individuality of crime in a climate where Ankara’s obligations under the European Convention of Human Rights are suspended as part of the emergency rule, declared five days after the botched coup.

The crackdown on journalists has been another excess of the probes. Since July 15, 42 journalists have been arrested, among them senior figures with no Gulenist past such as Nazli Ilicak, Sahin Alpay and Mumtazer Turkone, reinstating Turkey as the world’s worst jailer of journalists.

According to a tally published Aug. 15 in Cumhuriyet, the one-month toll of the putsch aftermath included the closure of dozens of overwhelmingly Gulenist media outlets, among them 16 television channels, 23 radio stations, 45 newspapers, 15 magazines and 29 publishing houses and distribution companies.

Prime Minister Binali Yildirim, meanwhile, said Aug. 18 that 40,029 people had been detained, with 20,355 of them put in jail to await trial, in addition to 79,000 people dismissed from public service. Using legislative decrees, another emergency rule instrument, the government has seized 35 private hospitals, 1,061 educational institutions, 800 student hostels and 223 tutoring halls, in addition to shutting down 129 foundations, 1,125 associations, 15 universities and 19 trade unions.

The clampdown on “FETO’s business leg” has been of a similarly staggering proportion. Detention warrants have been issued for 187 people, owners or managers of companies belonging to the Gulen congregation’s business organization, the Turkish Industrialists and Businessmen Confederation. Prosecutors have ordered the seizure of all of the suspects’ assets.

President Recep Tayyip Erdogan’s Aug. 10 remarks might explain the magnitude of the clampdown. Addressing a group of businesspeople in his palace, he said, “We have to cleanse FETO from the business world, just as we are scraping them off from the armed forces, the judiciary and the bureaucracy. Some from the West are offering counsel, saying they are worried about thousands of people being dismissed. … But we are going to do it, no matter whether [the numbers reach] 10,000, 50,000, 100,000 or 200,000.”

Erdogan’s goal goes beyond purging Gulenists from security institutions. “Uprooting FETO is a duty,” he said. Hence, the campaign of closures, seizures, roundups and arrests extends to all sectors of public life and society, including sports and entertainment.

A week after the coup attempt, the term “FETO” went on the records of the National Security Council, as Gulen’s congregation was designated a terrorist organization threatening national security. Thus, all entities and members of the congregation fell into the terrorist category, losing legitimacy and legality at a stroke.

Beyond the purges in the army, the police and the judiciary, the clampdowns to “uproot FETO” from society are also marked by a disregard for human rights and legal norms, courtesy of the excessive powers the government wields under the state of emergency. Those who will live as “rooted out” outcasts from now on number in the hundreds of thousands, together with their families. Once the AKP’s ally, the Gulen congregation is now Turkey’s new social problem.