The Turkish government’s conduct in the clampdown on the Gulen community suggests it has little intention to acknowledge its own contributions to the turmoil. 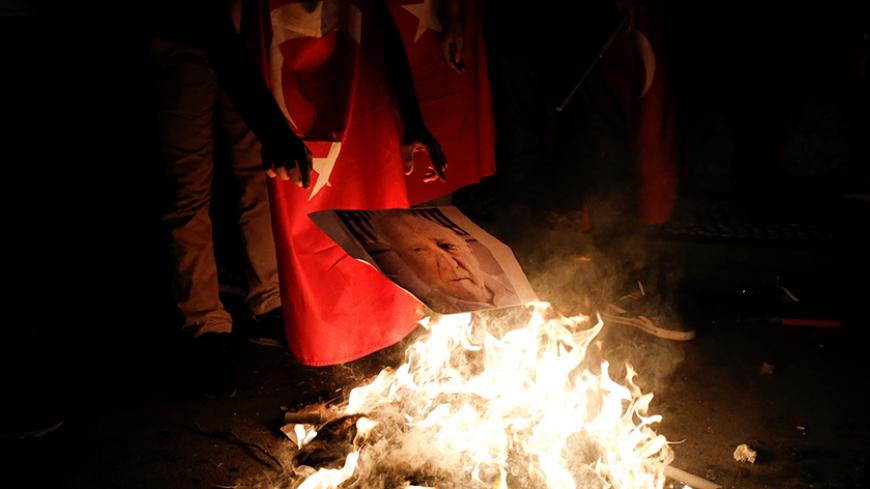 More than a month after the July 15 coup attempt in Turkey, the crackdown on suspected members of the Gulen community, the accused culprits of the putsch, is continuing and expanding. As of Aug. 18, about 12,000 people have been jailed pending trial, including prominent businessmen, academics, journalists and soldiers; 10,000 people remain in custody for questioning and 85,000 public servants have been either suspended or dismissed. To make room in the prisons, the Justice and Development Party (AKP) government issued a legislative decree last week, paving the way for the release of at least 38,000 prisoners, including convicted thieves.

So where will all this end and what is the criteria in the detentions? The government’s answer is highly controversial as it outlines criteria aimed openly at shielding the AKP, which had enjoyed a decadelong alliance with the Gulen community and showered it with favors. It was only after the two fell out that the government branded the community the Fethullah Gulen Terror Organization (FETO).

So the date of the fallout is now pinned as a milestone in “detecting” Gulenists and their supporters. It was Prime Minister Binali Yildirim himself who drew the line in response to mounting criticism that the purges had become a witch hunt. Even his deputy, Tugrul Turkes, joined the outcry, saying, “People have come to blame FETO even for the broken shock absorbers of their cars.” In remarks on Aug. 13, Yildirim pledged the authorities would work meticulously, adding, “We’ve determined Dec. 17-25 [2013] as the milestone.”

The premier was referring to two massive corruption probes that became public Dec. 17-25, 2013, as police moved to round up suspects, including the sons of Cabinet ministers, AKP members and crony businessmen. The government argued the probes were a plot by Gulenist police and prosecutors to unseat the AKP, dismissed leaked incriminating tapes as fabrication and soon blocked the probes. Of note, a top suspect in the probes, Iranian-Turkish gold trader Reza Zarrab, is now awaiting trial in the United States for breaching US sanctions on Iran, and the 2013 investigation is said to serve as reference for US prosecutors.

In the years before the corruption scandal, the government had backed massive trials targeting mainly soldiers but also journalists, intellectuals and politicians, with President Recep Tayyip Erdogan, then prime minister, calling himself "the prosecutor" of the cases. He would later disown the trials as a Gulenist plot to weaken the military and claim he had been “deceived.” Hundreds of people spent years in jail before being acquitted after key evidence used to convict suspects turned out to be fabrication.

Dursun Cicek, a colonel who was among the victims and is now a deputy for the main opposition Republican People's Party, slammed Yildirim’s “milestone” as “egocentric and insincere,” stressing that the Gulenist drive “to take control of the state” had begun in 2007, the year when the first dubious roundups began.

“Some would put the starting point at an even earlier date, but 2007 marked the beginning of incessant [Gulenist] operations,” Cicek told Al-Monitor. About 2,000 officers were decommissioned as a result of the trials, and up to 8,000 others quit the army “out of fear or because they lost hope” for their careers, he said, adding, “This led to FETO both breaking out of control and filling the vacant positions with its own people. They began gaining strength at a much faster pace.”

Cicek mentioned the 2010 referendum as another landmark that emboldened the Gulenists, echoing a widespread conviction that constitutional amendments approved at the referendum helped Gulenists seize key posts in the judiciary. Cicek quoted former AKP deputy and Erdogan adviser Faruk Koca as telling him, “If the [Gulen] community had asked for one [public] position before the 2010 referendum, it began asking for 10 after it.”

“FETO was successfully carrying out its campaign to seize the state in those years, but Dec. 17-25, 2013, is the convenient milestone for the government because it’s important with respect to [evading] international crimes and corruption and bribery allegations. Beyond that, it’s neither fair nor justifiable,” Cicek said.

Besides the sham trials, rigged public service exams are another major grievance blamed on Gulenists before 2013. The media and the opposition had long sounded alarms that the exam questions were being stolen and distributed to selected people before the exams, but Erdogan and the government kept dismissing the claims. Today, at least 15,000 public servants face almost certain dismissal for having won their positions through the scheme. Yet their dismissal would serve nothing to remedy the plight of thousands of exam sitters who were unfairly disqualified and left jobless for years.

The list of grievances and allegations is long, but one thing is obvious: Since 2009, Turkey has witnessed a series of mass roundups and trials, and now — with the onslaught on Gulenists in full swing — it seems to be bracing for more. Hence, the government is facing calls to distinguish between the wrongdoers and the innocent and prevent more people from being victimized.

It’s truly intriguing how the clampdown has so far failed to uncover the political leg of the putsch or FETO, despite tens of thousands arrested in other realms. The government has a good reason to shy away from this, having backed the Gulenists for years. According to pro-government journalists and former Gulenists, the community’s presence in the state grew at least 15 times under the AKP.

This, in turn, has led to a frenzy of blaming anything on the Gulenists — like the son of late President Turgut Ozal, who earlier claimed his father was poisoned and now says he suspects a Gulenist finger in his death. Such claims can be passed over, but some old videos and speeches circulated on social media demonstrate amply why the government draws the line at 2013.

Take, for instance, the speech of Kamer Genc, the late opposition deputy, made in parliament in 2009. The flamboyant Genc was warning the AKP would “suffer the biggest blow” from the Gulen community in the future, while AKP deputies loudly protested and sought to get him off the rostrum. In another parliamentary session in March 2011, Bekir Bozdag, the incumbent justice minister, dismissed similar warnings by the opposition. “Fethullah Gulen is a precious value this country has raised. You may or may not like him, but he is an estimable and erudite person,” Bozdag said. “Everything about him is transparent and under the supervision of the state. You will do him great injustice if you accuse him as a gang [leader] without any judicial charge or conviction. Accusing clean people of being gang [leaders] is unacceptable.”

It’s past speeches like this that cast doubt on the government’s intent over the milestone it has set. The government, however, feels little pressure for accountability, as the Turkish media has largely lost its critical edge and the opposition is struggling to make its voice heard. Yet all cover-ups will inevitably surface tomorrow, as past cover-ups are surfacing today. Hence, the AKP has to face up to its mistake and refrain from creating new victims and thus ease the tensions gripping the country.