Pressure mounts on the Turkish government to assume political responsibility for Gulenist entrenchment in the state. 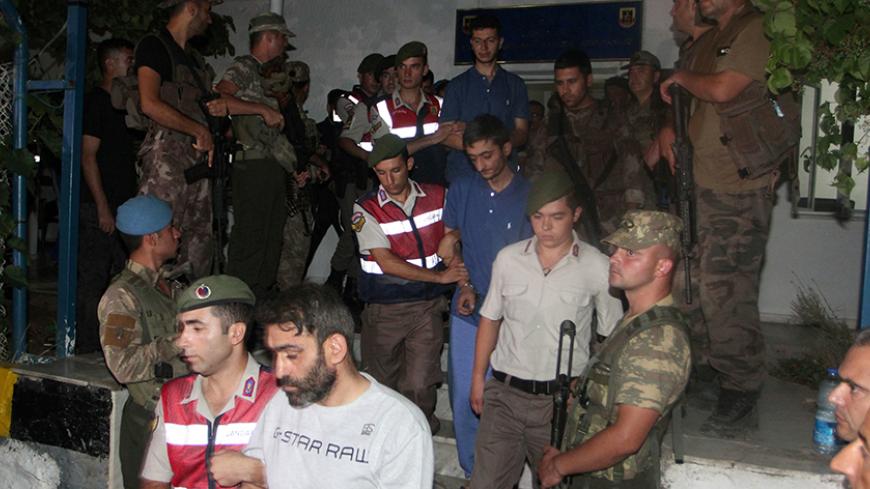 Members of the Turkish gendarmerie escort fugitive commandos who were involved in a bid to seize President Recep Tayyip Erdogan during a failed coup attempt last month, as they leave from a gendarmerie station in Mugla province, Turkey, Aug. 1, 2016. - REUTERS/Kenan Gurbuz
Sukru Kucuksahin
August 5, 2016

A massive cleansing operation has been underway in Turkey since the July 15 coup attempt, targeting the Gulen community — now called “the Fethullah Gulen Terrorist Organization” (FETO). The purge, conducted through legislative decrees made possible by the state of emergency, has landed thousands of people behind bars, including former or incumbent governors, bureaucrats, army generals, university presidents, academics, journalists and businessmen. Yet not a single known politician has been detained. This has sparked debate over the missing “political leg” and led to some intriguing developments and confessions.

Deputy Prime Minister Numan Kurtulmus was among the first to bring up the issue of FETO’s political connections. “There is certainly a political leg. Which coup in Turkey has been without a political leg? All legs of the coup must be uncovered,” Kurtulmus said in a TV interview last week. Stressing he knew no names and did not allude to anyone, he added, “All these things must be investigated. The interrogations [of detainees] must be meticulously conducted and [the investigation] must go as far as it takes.”

In the same interview, Kurtulmus described democratization, pluralism and inclusivity as the best antidote of coups, and he emphasized the need “to see the state not as something to be seized but as a place to serve.” He branded Fethullah Gulen, the US-based cleric accused of masterminding the coup, as a “bloody murderer” and claimed FETO’s understanding of Islam was no different from that of the Islamic State.

It was a remarkable outburst, for the same Kurtulmus had rushed to Gulen’s defense back in 2011 when Devlet Bahceli, the head of the opposition Nationalist Movement Party (MHP), called for a ban on all activities of the community. He was not alone. Labor Minister Suleyman Soylu, Agriculture Minister Faruk Celik and former Youth and Sports Minister Suat Kilic all hit back at the MHP leader. This is just one example of how the ruling Justice and Development Party (AKP) viewed the Gulenists in the past. A full overview of friend-turned-foes would take volumes to narrate.

Many are now urging the AKP to look into its own house, among them senior figures who spent years in jail as part of sham trials, which the government first backed and then disowned as a plot by Gulenist police and judiciary to weaken the army. “I’ll put it very plainly: If this fails to extend to the political realm, I’m not buying any fairy tales,” retired Adm. Semih Cetin, who spent more than three years behind bars on fabricated evidence, said this week.

The AKP-Gulenist alliance had collapsed in December 2013 amid a massive corruption probe that the AKP saw as a Gulenist attempt to topple the government. President Recep Tayyip Erdogan said at the time he was betrayed by the Gulen community and memorably grumbled, “What is it that we didn’t give them that they wanted?”

On July 30, Erdogan admitted the government had been “seriously mistaken” about the Gulen community, adding, “May Allah forgive us.” Soon, he went a step further in admitting responsibility and remorse. “I regret having failed to uncover much earlier the true face of this treacherous organization. I know we have an account to give to both Allah and our nation. May Allah and the nation forgive us,” he said in a public speech Aug. 3.

What Erdogan means by “giving an account” remains to be seen, but the political leg of the putschists or the Gulenists is nowhere to be seen at present.

So far, only an obscure lawyer has lodged a legal complaint against AKP founder Bulent Arinc and three former ministers, charging they were linked to FETO and helped Gulenist entrenchment in the state. The fact that the prosecutor’s office accepted the complaint is important, but one should take note that all four belong to a dissident group critical of the course the AKP has taken.

Several relatives of Arinc have been detained for suspected links with FETO, and Ankara Mayor Melih Gokcek has insinuated that the former deputy premier and parliament speaker colluded with Gulenists to take over the party. His claims drew a vitriolic response from Arinc, reviving an old feud between the two. Back in March 2015, Arinc had fought back similar claims by the mayor, accusing him of “selling Ankara parcel by parcel” to Gulenist entrepreneurs.

The AKP-held local administrations in Ankara and Istanbul have remained largely immune to the purges despite Arinc’s charges and the arrest of a senior official at the Istanbul Metropolitan Municipality, who was reportedly caught on camera welcoming the putschists on the night of July 15. In contrast, many senior figures of the MHP-held municipality in Mersin, for instance, have been detained.

The opposition supports the purge of Gulenists from the state but has repeatedly warned it should not degenerate into a witch hunt or be used as a smokescreen to clamp down on the opposition.

Engin Altay, the parliamentary whip of the main opposition Republican People’s Party, told Al-Monitor the party had set up a “crisis desk” to monitor the process. “There is no political institution or a municipal administration the [Gulen] community has not infiltrated, [but] it’s predominantly the AKP municipalities. Yet the putschists and Gulenists there are not being touched, while municipal officials known as leftists, social democrats or government opponents are being removed from duty,” Altay said.

“We support an active struggle against the [Gulen] community and criminals, but innocent people should not be victimized. We won’t let them take advantage of the situation to crush the opposition,” he added.

Erdogan’s open plea for forgiveness and acknowledgement the government has “an account to give” to the nation seems to be a signal that political heads may roll in the coming days. Yet the talk in Ankara’s political corridors is that such moves would be postponed for some time to avoid weakening the AKP ahead of planned constitutional amendments in parliament.

If Erdogan’s words — which one has to take as a sincere confession — are backed up with Kurtulmus’ call for democracy, July 15 could mark a positive new beginning for Turkey. There is already a measure of hope amid displays of willingness to sustain the thaw between the ruling party and the opposition, lessen political rhetoric and cooperate on constitutional amendments, and other important arrangements. The first indication of whether those hopes can materialize will be the duration of emergency rule.

Weeding off nondemocratic elements from the political realm could take Turkey to a fresh threshold. Hence, the admissions should be backed up with sincere steps on the ground. Meeting the demands for a government based on merit rather than religious affiliations is a crucial prerequisite in that regard.