The resignation of Istanbul Deputy Hakan Sukur, one of Turkey’s all-time best strikers and a Gulenist, from the AKP seems to have come right in time for the all-out war between the government and Gulen movement. 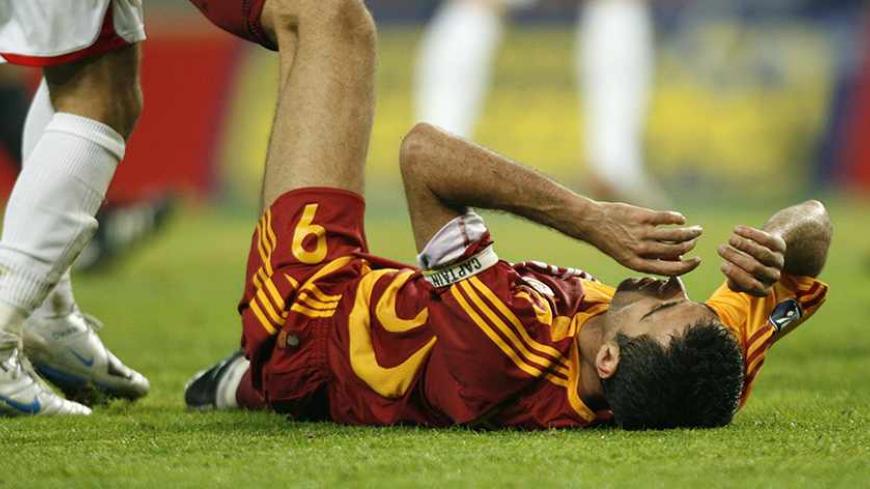 One does not quite feel it yet in Turkey thanks to the whirlwind that has taken over the political scene of late, but what is supposed to be a laid-back time of retrospection as we prepare to enter a new year is upon us.

So today as I give you my thousand words on what has been going on in this rollercoaster of a country, I will ask you to look back in time with a couple of old videos.

The first is a sports clip that I first came upon Dec. 12 on The Guardian’s TalkingSport blog.

There he was, Hakan Sukur, the all-time top scorer of the Turkish soccer league, shown scoring 100 of the 383 goals of his club career with rhythmic beats of hip-hop music in the background.

Having watched many of those goals live and being a fan of Galatasaray, the club which Sukur helped win 14 major titles in the 1990s, I very much enjoyed the video.

Little did I know that just four days after The Guardian posted this nostalgic clip, Sukur, who retired from soccer in 2008 and became a politician, would be breaking news with his resignation from the Justice and Development Party (AKP).

With the ongoing corruption probe against the government, which began the following day, causing a major political tremor in Turkey, Sukur’s resignation already feels like ancient history.

But I think its symbolic significance is being quietly engraved in the public psyche, and we may soon look back to this soccer-player-turned-parliamentarian’s Dec. 16 departure as the beginning of the end for the AKP government’s once seemingly unshakable hold on power.

Sukur, 42, is not any parliamentarian.

In an article posted on Pennsylvania-based Islamic scholar Fethullah Gulen’s official website, Huseyin Gulerce — a columnist for Zaman and a prominent figure of the Gulen’s Hizmet (Service) movement — explained Sukur’s unique position: “[Sukur] respects and is loyal to Fethullah Gulen and is trustworthy, brave and true-hearted. Likewise, he is respectful also toward the prime minister and thankful for his services to our country.”

No image captures Sukur’s reverence to those two men better than the video of his 1995 wedding to his first wife, the late Esra Elbirlik.

Their marriage lasted less than a year; however, the couple’s "I do's" still resonate today as they were said in response to the questions asked by Prime Minister Recep Tayyip Erdogan, the then-mayor of Istanbul who officiated the ceremony, while a much younger looking Gulen watched as the groom’s witness.

Nineteen years have passed, and the blurry clip showing Erdogan and Gulen at the same table, with the former requesting in the most reverent manner the latter’s testimony to Sukur’s marriage now having become a popular relic of bygone days of mutual deference between the AKP and the Hizmet movement.

Bygones are forever bygones — what the traditional theory of commerce teaches us might indeed be true for the chances of peaceful coexistence between the AKP leadership and Gulenists.

The code word is “enemy” here. In his statement of resignation, which made no secret of his sentiments toward both parties, Sukur also used the word.

“For over 20 years, I have known and loved the Hizmet movement,” Sukur said. “To treat these people, who have staunchly supported the government in every issue ... as enemies is nothing but ingratitude at best.”

This was an uncharacteristically sentimental statement for Sukur. The ex-soccer player who used to be admired — albeit also teased — for his emotional outbursts of homesickness during the years he played for Italy’s Serie A, has since transformed into a soccer analyst and a rather cool-headed parliamentarian.

But the strong words in Sukur’s manifesto-like resignation reflect the Gulenists’ attitude well. “Sukur’s heart was aching,” Gulerce wrote. “The grassroots of the AKP and the Hizmet community have felt the very heartache and pain for months now.”

“Heartache” may be too benign an expression.

In fact, the collapse of what has been a tactical alliance between Turkey’s ruling party and Gulenists has been experienced by both sides as an almost existential threat.

And the conflict has certainly been visible for longer than “months.”

Both Sukur and Gulerce pointed to the recent plan to close the cram schools — over 4,000 in number and representing a billion-dollar business, a considerable portion of which is owned by Gulenists — as the most prominent cause of tension.

However, the government’s previous moves to purge Gulen supporters in the police and judiciary already hit the Hizmet movement hard.

Those moves were widely interpreted as retaliation for an attempt by the Istanbul prosecutor’s office nearly two years ago to interrogate Hakan Fidan, Turkey’s spymaster and a close associate of Erdogan, over the involvement of the Turkish National Intelligence Organization in negotiations with the outlawed Kurdistan Workers Party (PKK).

Erdogan blocked the probe, but in his mind, the move symbolized no less than a coup attempt by Gulenists against his government and himself.

His reaction to the massive graft investigation has not been any different. Completely disregarding the merits of the case, he denounced the probe as a “dirty game” and pressed a wide purge of the police. Fourteen senior officers, most of them allegedly associated with the Gulen movement, were removed.

Henri Barkey fittingly called this the “mother of all battles” in his recent Al-Monitor article. What we are witnessing is an all-out war between an increasingly authoritarian political leadership and its ever more nervous rival.

The former weakens its own democratic legitimacy by the arbitrariness and paranoia it seems to display at every call for accountability. The latter acts, for all intents and purposes, as a single political entity while resisting the test of legitimacy and transparency a political organization would require.

Erdogan seems determined to continue the crackdown on the Gulenists he believes to be behind the graft probe.

“Those who want to establish a parallel structure alongside the state, those who have infiltrated into the state institutions ... We will come into your lairs, and we will lay out these organizations within the state,” he said on Dec. 21.

Gulen responded in kind via a video message: “Those who don’t see the thief but go after those who chase the thief ... May God bring fire to their homes.”

Hearing such malediction, Sukur’s resignation seems to have come right in time to avoid being in the same “burning” house with Erdogan. Whether Sukur knew or not about the graft probe in advance, it is clear that the Gulenists did not want their — in Gulerce’s words — “lion-hearted hero” to dwell at the AKP anymore.

One cannot help but smile at columnist Can Dundar’s recent Twitter post in which he mock-quoted Gulen telling Sukur “to get out of there, we’ll dive in.”

The immediate consequences of the battle are not funny, however. Deputy Prime Minister Ali Babacan said that Turkish public companies had lost about $20 billion of their market value in a week.

As for Sukur, he did not miss his weekly show on live television on Dec. 22. Except for the light stubble on his face, he seemed his usual self, calm and visibly pleased as he commented on Galatasaray’s important win. At least one of his teams was faring well.