The recent resignations from Turkey’s Justice and Development Party (AKP) and the explanations given to them by the departing members point to an increasingly isolated Prime Minister Recep Tayyip Erdogan. 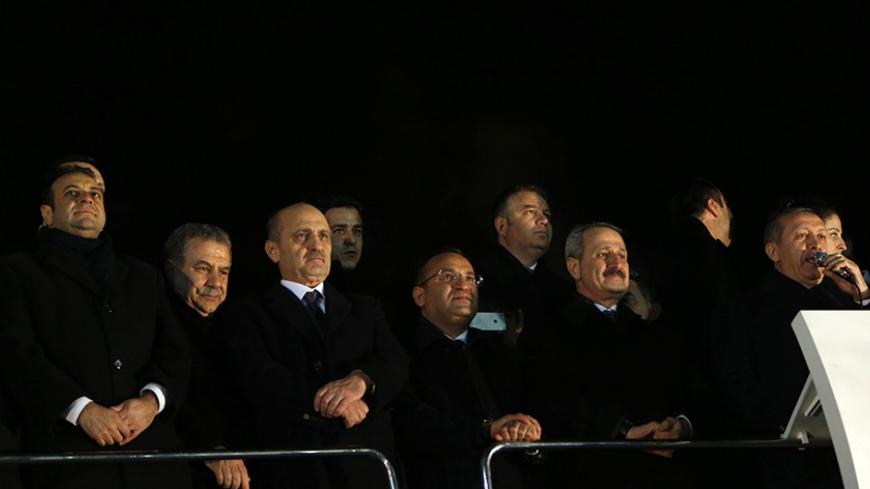 While it would be premature to say his Justice and Development Party (AKP) is sinking (recent polls indicate that the party still has more than 40% electoral support), it has been in treacherous waters lately and there are indications of leaks left and right, from port to starboard.

The AKP members who jumped ship recently come from various backgrounds and their respective departures, if not overly harmful to the party, show at least one thing — that the coalition with which Erdogan governed at one point is no more.

That coalition peaked at the 2010 constitutional referendum when the government’s proposal received 58% support and Erdogan was keenly aware of the diverse makeup of the vote.

On Dec. 12, 2010, in a fine example of his polite victory speeches — dubbed “balcony speeches” in Turkey — Erdogan offered gratitude to several groups that voted “yes” in the referendum.

The Pennsylvania-based Islamic scholar Fethullah Gulen and his supporters received their due with a phrase that employed the code word that indicates Gulen in Turkish politicalese, that is, “beyond the ocean.”

“I congratulate all my brothers who supported this process from around the world and beyond the ocean,” Erdogan said.

Then he moved on to thank other “yes-voters,” named each rival party — CHP, MHP, BDP, Hak-Par, IP — and called their members “my siblings.” He also thanked “independent nationalists, Turkish intellectuals, revolutionary leftists, … liberals.”

Erdogan was not exaggerating. Voters from all those groups had joined AKP supporters in that referendum to pave the way to amending the nation’s constitution — a disgraceful product of the 1980 coup that still hinders Turkey’s democratic progress.

That was then. In today’s post-Gezi Park protests and post-corruption probe Turkey, one would be hard-pressed to find leftists or liberals, let alone Gulenists, who are sympathetic to Erdogan’s governing style.

And vice versa. Visibly uncomfortable with anyone who challenges his line, Erdogan increasingly isolates himself and sees to it that any voice of dissent within the AKP is silenced immediately.

The pickiness of Erdogan’s advisers reached new heights recently as 12 major newspapers, including the three top-sellers Zaman, Posta and Hurriyet, were not among the publications offered a seat on the prime ministerial plane to cover Erdogan’s current trip to Asia. And the columnists who were invited to the prime minister’s mostly off-camera breakfast meeting Jan. 3 with the media were so homogeneously Erdogan-friendly that journalist Cuneyt Ozdemir nailed it when he called it “a press conference that was closed to the press” in a Twitter post.

Against this background, the recent resignations from the AKP seem to represent a trend rather than isolated cases. Here is a list of those who departed and the reasons they gave for it.

Idris Bal: Once a Fulbright scholar at Harvard and a former lecturer at Turkey’s Police Academy, Bal, 45, stood out in the AKP for his eloquence. He is close to the Gulen movement, but his resignation preceded the latest round of fighting. Indeed, he was “shown the door” for publicly disagreeing with Erdogan on several issues such as the latter’s tough line during the Gezi protests, his attempt to ban coed student houses and shut down cram schools. On this last point, which sparked an all-out war between the Gulenists and Erdogan, Bal was outspoken from the get-go. “A private company cannot be … shut down under orders,” he said on Nov. 14 in one of his many dissenting Twitter posts. Consequently, he was sent to AKP’s disciplinary board for expulsion. “They have cast all the smears possible,” he said in announcing his departure, “they called me a mole. I’ve been treated with all sorts of injustice. I don’t want any party organization which does not want me.”

Hakan Sukur: Erdogan’s poster boy in the 2011 elections, the ex-soccer player left the party the night before initial arrests were made in the graft probe that implicated several ministers and caused a major government reshuffle. Sukur, 42, is a member of the Gulen movement and he told the public that he resigned after several consultations with Gulen himself. Sukur’s resignation statement accused the AKP leadership of treating the Gulenists as “the enemy.” [For a more detailed analysis of Sukur’s departure see my Dec. 26 column.]

Idris Naim Sahin: Unlike Bal and Sukur, Sahin was neither a Gulenist nor a newcomer to the party. He has been a deputy of AKP since 2002. Predecessor to Muammer Guler, who had to leave his post in December after his son was arrested in the corruption case, Sahin, 57, was the interior minister for 18 months until January 2013. A staunch nationalist, Sahin made several statements as minister that were borderline racist. His speeches and policies outraged not only Kurds but all democrats in the country, including several members of the AKP. Sahin was dismissed as minister but remained on board until his departure, Dec. 25, in protest of the government’s purge of dozens of police officers, who were sanctioned for their role in the graft probe. He himself had appointed some of them during his tenure. In his resignation letter, Sahin did not mince his words: “When it comes to governing, [the party] prefers the guidance of a small oligarchic staff comprising politicians and bureaucrats, whose intentions are uncertain.”

Erdogan Bayraktar: Profiled here in a recent column, Bayraktar, 65, went from being Erdogan’s bosom buddy to being called a “traitor” by AKP crowds in a matter of hours. Bayraktar oversaw Turkey’s construction crusade as the head of TOKI (Turkey’s Housing Development Administration) for more than nine years. Pious but worldly, he represented the pragmatic yet at times unprincipled core of his party, which once inspired a journal to coin the telling phrase “Construction Ya Rasoullallah” (Construction O messenger of God) as a mock prayer by AKP. Today, if anyone knows what went on behind the scenes in the thousands of projects that helped keep not only Turkey’s economy alive but also AKP’s coffers full through friendly and rapidly prospering contractors, it is Bayraktar. He stepped down from his post as the minister of environment and urban planning Dec. 25 on Erdogan’s request. Unlike other resigning ministers whose sons were also implicated in the graft probe, Bayraktar left the party as well and invited Erdogan, who he said had approved most of the zoning plans under investigation, to follow suit.

Ertugrul Gunay: The highest profile “social democrat” in the AKP, Gunay, 66, symbolized the party’s once-broad embrace better than anyone else. Gunay, who entered the parliament at the age of 29 and rose to the position of secretary-general at the opposition Republican People’s Party (CHP), joined the AKP in 2007 and served as the minister of culture and tourism in two consecutive governments until January 2013. Gunay announced his resignation Dec. 27, soon after he and two other deputies had been sent to a disciplinary board for expulsion upon their criticism of the government’s efforts to block the graft probe. In his news conference, Gunay said he could not tolerate what was going on in the party any longer. “I can’t condone cruelty and I’ll never applaud the oppressor. … I can’t live without freedom.” Since stepping outside the AKP, Gunay has become a more vocal critic of Erdogan’s “imperious” style. [Read this interview with Gunay for more on his criticism of the AKP of late.]

Haluk Ozdalga: Ozdalga, 66, was also previously active in CHP and the Democratic Left Party (DSP) and is one of the few bona fide theoreticians of social democracy in Turkey. Like Gunay, Ozdalga’s presence at the AKP made the party supportable for many secular voters. His resignation followed the party’s initial move to expel him for dissent. In announcing his departure, he said he would not accept attempts to cover up the ongoing investigation. Later, in an extensive interview with Today’s Zaman, Ozdalga provided a lucid criticism of the AKP’s leadership. Asked if the AKP was still strong, he said, “A strong political party is one where the leader is the first among equals, like the AKP in its initial years. Now, everybody knows it is different.”

Erdal Kalkan: A former CHP member, Kalkan, 67, hails from the overwhelmingly secularist Thrace region, where the AKP is relatively weak. He is the deputy of likewise AKP-cautious Izmir and the party’s move to expel him, followed by his resignation Dec. 27, falls in line with Erdogan’s preference for homogeneity. Kalkan was utterly critical of this attitude at his departure. “The prime minister sees the party as his own farm,” he said.

Hasan Hami Yildirim: The last resigning AKP deputy to date, Yildirim, 40, is associated with the Gulen movement and his resignation letter on Dec. 31 made no secret of his discomfort with what he saw as “AKP’s defamation campaign” against the Gulenists. “[There is an attempt to] eradicate a civil society movement,” Yildirim said. With his departure, AKP’s parliamentary group had dropped to 319 from 327 in eight weeks. 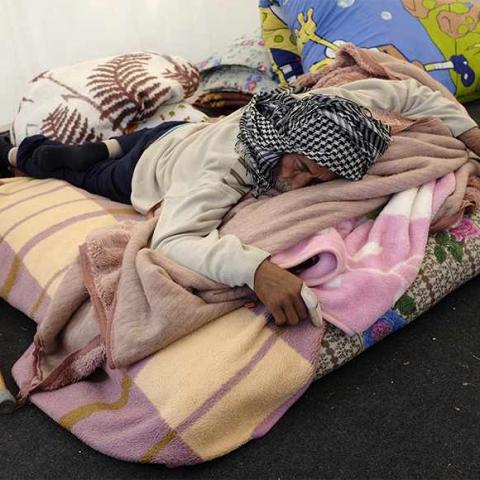