After Erdogan’s harsh accusation of treason to anyone critical of his policies, a daily Cumhuriyet columnist calculates that half of the population is acting treacherously. 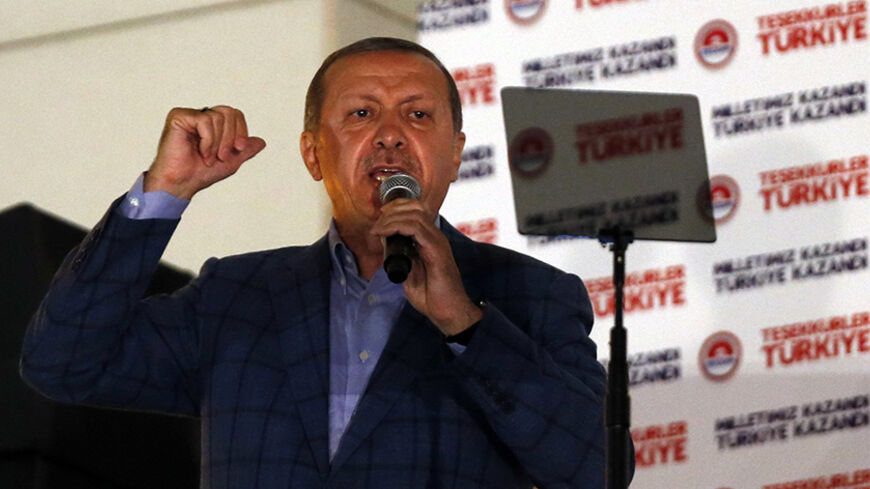 Recep Tayyip Erdogan gestures as he addresses to supporters during the celebrations of his election victory in front of the party headquarters in Ankara, Aug. 10, 2014. - REUTERS/Umit Bektas

Treason is a loaded word, but new Turkish President Recep Tayyip Erdogan has made it a habit over the years to accuse anyone critical of his policies with treason. He did the same Aug. 27 in his farewell speech to his Justice and Development Party (AKP) members and used the word “treason” 12 times, accusing the opposition, the Gulenists and the judiciary.

Making insinuations against former Interior Minister Idris Naim Sahin, former Culture and Tourism Minister Ertugrul Gunay and AKP founding member Abdullatif Sener, Erdogan said: “We witnessed in our recent history those who betrayed their cause, their party, and engaged in treason against their nation. You should know too well that no one remembers them and no one will ever do so.” Erdogan also pointed at Hakan Sukur, a former AKP deputy and a follower of US-based Sunni cleric Fethullah Gulen: “You should also know well that no one will ever remember those who resigned from the party via one telephone call coming from overseas, or those who believed the messages brought by those in favor of a coup in the country.” Sukur resigned from the party after the December 2013 graft probe surfaced and Erdogan began an open battle against the Gulenist establishment in Turkey's security and judiciary bodies, accusing it of setting up a parallel state aiming to overthrow the government.

“Our judiciary cannot be left to a group of traitors. While it is clear who [Gulenists] are working for, and how they are engaging in treason against their own country, they cannot be permitted to give orders in our judiciary,” Erdogan said.

Ozgur Mumcu of the daily Cumhuriyet concluded that Erdogan is accusing half the population that did not vote for him with treason. “It is clear that [Erdogan] is not against the military, but the control mechanisms. He is against accountability. He is against judicial review. He can’t even tolerate a slightest criticism coming from his own party members. He makes no distinction between the military, judiciary, legislature or the opposition. Do they try to limit his power or not? That is all that matters,” he wrote.

“Those who supported Erdogan in doing away with military tutelage failed to grasp the fact that he does not care whether the method of accomplishing that is democratic or not. He has personalized the party, the cause and the mission. …Therefore any criticism about him and his followers equals treason.”

Mumcu stressed that incoming Prime Minister Ahmet Davutoglu and Interior Minister Efkan Ala have also made a habit of accusing people of "treason"; Mumcu also drew attention to the poisonous atmosphere where pro-government journalists have started to accuse anyone critical of Davutoglu’s foreign policy with treason.

“The graft probe targeted the government. [Erdogan] felt betrayed. He repeatedly accused the Gulenists, the CHP [main opposition Republican People’s Party] and the MHP [Nationalist Action Party] with treason. He said many times that the HDP [People’s Democracy Party] should not be in parliament,” Mumcu wrote. “When the TUSIAD [Turkish Industrialists and Businessmen's Association] president [Muharrem Yilmaz] warned [in January 2014] about the economy and foreign capital, Erdogan accused him with treason."

Critics of Syrian policy took their share of lumps, too. They were accused either of not being a child of this land, or of treason.

It seems the government is using its power to prevent an independent judicial investigation about the truth behind the corruption and bribery allegations. When asked, ordinary citizens do not say that the Erdogan government is innocent of the allegations. They just say that all the past governments were corrupt also! Erdoganists don’t seem to be disturbed that those Gulenists used to be in bed with the government during the time of the Ergenekon trials that brought the end of the military tutelage in the country and that the government considered those in the judiciary and the security establishment then as patriots. Nobody really seems to be thinking about these shifts and what it means for the people and for the society when treason becomes a routine accusation.

As Mumcu said, half the people see the other half as traitors.