As Turkey's municipal elections approach, rumors are flying that former allies of the president will form a rival party. 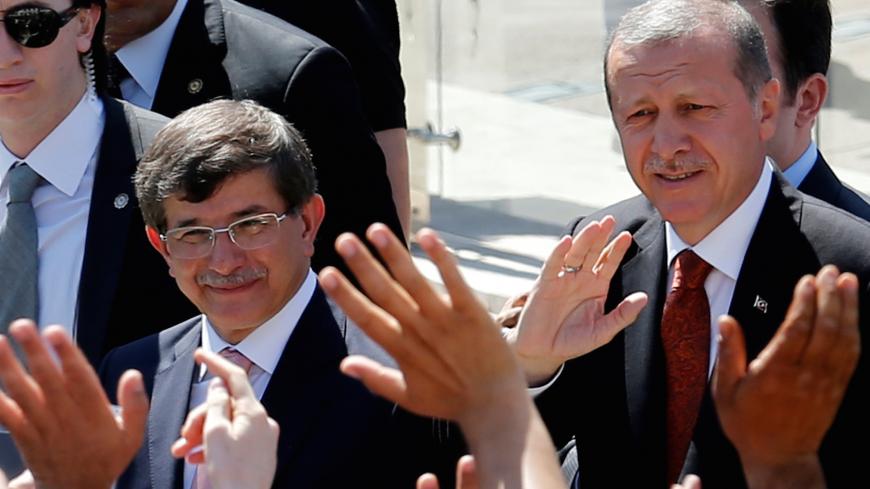 Rumors that former allies of Turkey’s President Recep Tayyip Erdogan are poised to launch at least one rival party are continuing to stir debate in the run-up to nationwide municipal elections due to be held on March 31.

Former Prime Minister Ahmet Davutoglu is the name that pops up with the most frequency as the leader of a new alliance that will purportedly assemble pious conservatives, liberals and disgruntled members of Erdogan’s Justice and Development Party (AKP). Former President Abdullah Gul and two former economy ministers, Ali Babacan and Mehmet Simsek, are said to be mulling a party of their own. There’s another rumor that all of the above will join hands against their former boss. A well-informed source told Al-Monitor, “Davutoglu is the most enthusiastic of the lot and believes that once he forms a party, the others will join him.” Gul allegedly favors a new party led by Babacan, a well respected figure in international circles who remains untainted by corruption, rather than lead one himself. “Davutoglu wants to be the leader himself, though,” said the source, who spoke on condition that he not be identified.

A speech Davutoglu delivered Feb. 9 in Ankara preceded by prayers at the ancient Haci Bayram Mosque offered clues to his ambitions. He lamented the “shallowness of intellectual life in recent times” and reminded his audience that inflation stood at a measly 3% when he stepped down as prime minister in November 2015 (pushed out by Erdogan.) Baris Terkoglu, a columnist for the opposition Cumhuriyet who was present at the 95-minute talk, noted, “He systematically criticized the AKP’s policies that followed his reign.”

None of the alleged hopefuls has commented publicly on the claims so far, but Erdogan has.

At a campaign rally in the northern province of Tokat, Erdogan accused his former colleagues of treason. Without naming anyone, Erdogan said, “Sadly some of our friends when we first embarked on this journey together were perfectly happy when given positions but when we asked them to take a small break they got off our train and boarded another. … Those who betrayed us today will betray others tomorrow.”

Veteran conservative columnist Fehmi Koru, who is a personal friend of Gul, reminded readers that Erdogan had himself split away from his mentor, former Prime Minister Necmettin Erbakan, to form the AKP. “Did that amount to treason?” Koru asked.

Speculation that Gul and Davutoglu would throw down the gauntlet has been around for some time. It intensified ahead of the presidential elections last year. Gul, a moderate, was under intense pressure to declare his candidacy as he was seen by many as the sole candidate capable of beating Erdogan at the polls. But then Turkey’s former chief of general staff, current Defense Minister Hulusi Akar, landed in Gul’s backyard in a helicopter accompanied by Erdogan’s spokesman Ibrahim Kalin two months before the presidential vote. Gul went quiet.

So why would he or any others re-emerge now? What has changed? After winning the presidential elections amid widespread allegations of ballot stuffing, Erdogan has concentrated power in his own hands. He has near absolute control over the media and has locked up all of his enemies, perceived or real. They include over 100 journalists and tens of thousands of judges, policemen, military personnel, academics and assorted others accused of links to the abortive 2016 putsch. The army and the police are under his control. The judiciary is everything but independent. And none of this seems to have bothered some 53.7% of voters who cast their ballots for the AKP and its nationalist allies in the parliamentary elections that were held concurrently with the presidential ones.

What has changed is the economy, which has long been Erdogan’s strongest suit. Gul and Davutoglu may be banking on the AKP’s lagging popularity as a result of the spike in joblessness and inflation, slowing growth and the collapse of the Turkish lira. They are reportedly awaiting the election results before announcing their new party. Some opinion polls suggest that the main opposition candidates in Ankara and Bursa may dethrone the AKP and that its candidate in Istanbul, the biggest prize of all, is several points ahead of the AKP as well.

Whatever the results, would a new party set up by former AKP figures stand a chance?

Levent Gultekin, a prominent conservative pundit who is in contact with the burgeoning party members, doesn’t think so for several reasons. For one, he told Al-Monitor, politics in Turkey remains “a contest between tribes split along religious, sectarian and ideological lines who view winning elections as winning control of Turkey.” They fear that if they break away from the herd they will be viewed as traitors, “just as Erdogan described.” It's the kind of “group-think culture” that paralyzes almost all AKP politicians, Gultekin claimed.

The other big obstacle, he added, is Erdogan himself. Challenging him would take the sort of courage none of these contenders has, he concluded.