No room for Gul in Erdogan's Turkey

Recep Tayyip Erdogan’s plans for the presidency do not involve power sharing, but pushing Abdullah Gul out of the political realm entirely bodes ill for Turkish democracy. 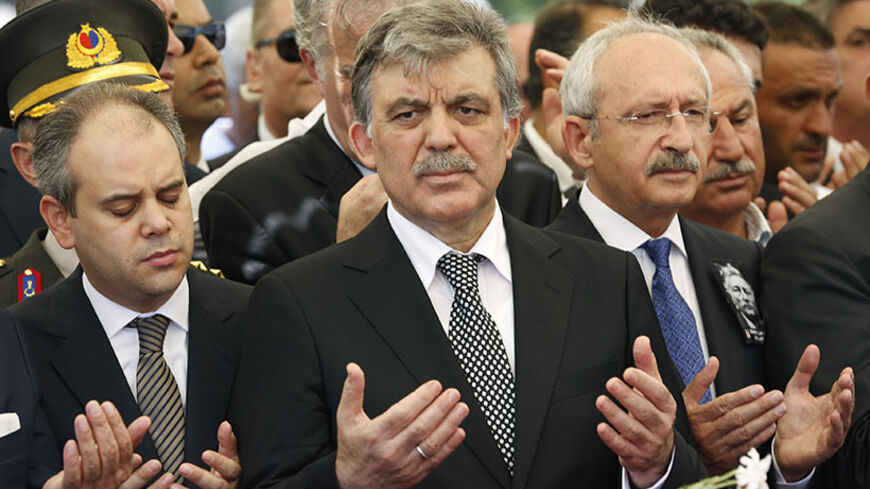 Until very recently, forecasting Turkey’s near future was very fashionable for anyone who stepped on Turkish soil. The most common question directed by pundits to their Turkish counterparts was whether a Putin-Medvedev sort of swap was likely between Recep Tayyip Erdogan, who would ascend to the presidential seat, and Abdullah Gul, the current president who would step down to assume the post of prime minister.

The question reflected wishful thinking. Especially the Westerners, who do not want to see their ally Turkey drifting into one-man rule under Erdogan, were trying to calm their nerves by saying that a sober Gul would serve as a formidable check and balance to a maverick Erdogan. Given the camaraderie between the two leading figures of Turkish politics, “a Putin-Medvedev-type swap” sounded reasonable and seemed likely following the presidential elections.

But for those who knew both men, and more importantly, had a sense of the inner mechanisms of the ruling Justice and Development Party (AKP), of which Gul and Erdogan are considered co-founders, the chances of such a swap looked nearly nil.

The reason was very simple: Erdogan was aiming for the presidency to further his Sultan-like hegemony on ruling the country, and such an endeavor would not permit any sort of power sharing with anyone.

The only way for Gul to take the post of prime minister was to go back to the AKP at the end of his term, run for the chairmanship of the party and lead the party in the general elections scheduled for 2015. If the AKP wins once again, President Erdogan, according to the constitution, would be obliged to appoint the chairman of the victorious party to form the government.

As a matter of fact, within the first 24 hours of the presidential election (won in the first round by Erdogan), Gul, at one of the farewell receptions for his presidency, disclosed to journalists that after he stepped down, he would go back to the AKP, and it was only natural that he would remain involved in politics as the founder of the ruling party.

Gul would step down on Aug. 28, following the official ceremony to hand over the presidency to Erdogan. It is no secret that he will be the strongest contender for the post of party’s chair to be evacuated by Erdogan.

Less than an hour after Gul’s remarks, the party’s executive committee announced that it would hold a special congress on Aug. 27 to designate (or elect) a new party chairman, so that President-elect Erdogan could entrust him with forming the new government the day he replaces Gul.

The timing and the substance of the move was very obvious. Erdogan does not want Gul at the head of the AKP, and he does not want him as the next prime minister of Turkey.

The reason is transparent: Gul cannot and will not be a puppet prime minister for Erdogan, who wants a more or less South American-style presidency for the next five years, if not 10.

The moment after the AKP executive committee’s decision was made public, a smear campaign against Gul was unleashed by those closest to Erdogan in the media. Erdogan himself took part in it. In his speech to the AKP’s provincial branch leaders on Aug. 14, he made bitter allusions to Gul. Referring to the public debate over him undercutting Gul’s plans by declaring Aug. 27 as the day to elect a new party leader, he said, “The devil will enter the line. If we give in to our interests, we will damage our party’s integrity. … This party was not established to provide a seat to anyone.”

Ankara parliament member Yalcin Akdogan, known as Erdogan's right arm, in his Aug. 13 column in the pro-AKP daily Yeni Safak, wrote something many interpreted as referring to Gul: “This party does not owe a debt to anyone. All the posts gained by the AKP are Erdogan’s achievements. He therefore has the right to decide who will take over which post.”

The smear campaign against Gul exposed certain attitudes hitherto unheard of. One such reaction was from writer Levent Gultekin, who emerged as an "independent Islamist." Gultekin asked, "Are all achievements the work of Erdogan?" and recalled the days before the establishment of the AKP 14 years ago. He reminded readers that Gul had led a "renewal movement" against the powerful Islamist figure of the era, Necmeddin Erbakan, and Erdogan, who initially feared being branded a traitor by Erbakan, had stayed out of the movement.

Gultekin said, “Erdogan was so frightened by being branded as such by Erbakan, he stayed away from the meetings of the renewal movement under Abdullah Gul’s leadership and would not even stop by at liaison offices.” Nevertheless, Gultekin said that after Erdogan’s participation, the movement became stronger. He emphasized the importance of the symbiotic union between Gul and Erdogan, writing, “Abdullah Gul has the wisdom, a calm style and progressive policies; Erdogan had the charisma and political magnetism.”

Infuriated by the injustice toward Gul, he concluded, “If Abdullah Gul had not taken the risks, overcome many barriers by leading the way and won the confidence of different segments of society, the AKP could have reached its current status.

"When the two joined up, they became a phenomenal force. Now, to claim that this formidable empire these two "brothers" built should to shoulder and the gains they made are the success of one man is unconscionable at the very least. To say 'These are all Erdogan’s achievements' is to disregard the Gul's effort and courage. It is discourteous. It is ungrateful. If you ask me, more than anything else, it is senseless.”

Another remarkable assessment of Gul came from Al-Monitor columnist Amberin Zaman. In her Aug. 15 Taraf column, she attributed the successes of Turkish foreign policy to the period between 2003 to 2007, when Gul was the foreign minister. Since current Foreign Minister Ahmet Davutoglu is expected to be Erdogan’s successor as AKP chairman and prime minister, Zaman’s remarks were a veiled and strong criticism of Davutoglu as well as Erdogan.

She wrote, "The true architect of the shining years of foreign policy was Abdullah Gul, who served as the foreign minister between 2003 and 2007. His share in making the AKP what it is is no less than Erdogan’s. He became the president, had a say in the country and the AKP. Now the AKP’s so-called reformists, or as writer Levent Gultekin calls them, 'Erdoganists,' are shamelessly saying, 'We don’t owe any debt to anyone' — insinuating Gul, of course. The prime minister, who seems to content with this scene, is getting ready to leave his seat to Davutoglu. May the 'new Turkey' where loyalty is 'in' and merit is 'out' be good for all of us."

Gul was the first voice of dissent against Erbakan, the former leader of traditional political Islam in Turkey. He served as prime minister while Erdogan was banned from politics and was magnanimous enough to leave his post to him the moment the ban was lifted. He also served as deputy prime minister and foreign minister, and has been the mostly respected and accepted president of the republic for the last seven years. Therefore, to push him to oblivion is a bad omen in terms of political ethics in Turkey and more widely, for the health of Turkish democracy.

Which road Gul will take remains to be seen. One thing is sure: If he decides to be, he will be Erdogan's most formidable contender.