How does the AKP pick its candidates?

The ruling Justice and Development Party's list of candidates for the Turkish parliament is based on simple criteria: loyalty and obedience to the president. 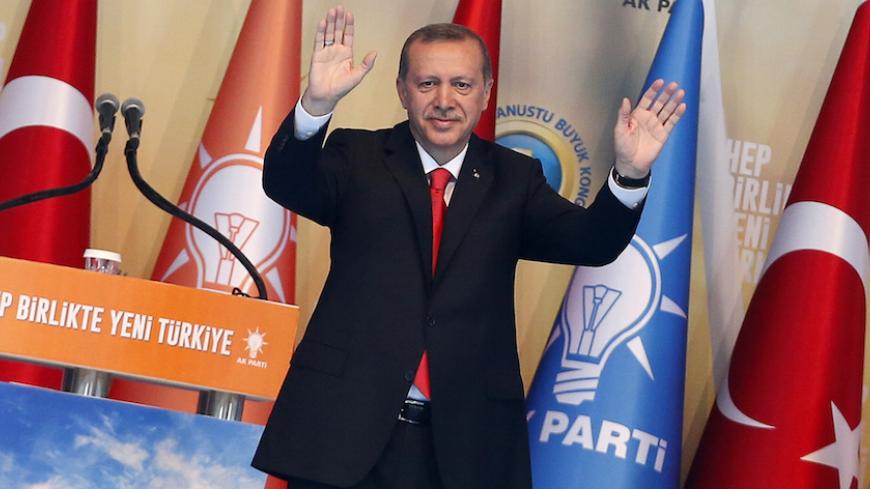 Turkey's Prime Minister Recep Tayyip Erdogan greets his supporters during the Extraordinary Congress of the ruling AKP to choose a new leader ahead of his inauguration as president in Ankara, Aug. 27, 2014. - REUTERS/Umit Bektas

On April 7, Turkey’s political parties announced their lists of candidates that will run in the June 7 general elections. The lists are important, for they signal what sort of a parliament Turkey will have for the next four years. The list of the ruling Justice and Development Party (AKP) is particularly crucial, for all polls indicate that the AKP will form the largest and dominant group in Turkey’s 550-seat National Assembly.

Before going into details, one must first note a key feature of Turkey’s political system and culture that may sound unusual to a Western reader. In the West, political candidates are often selected in a bottom-up process, where parties in each district elect their own deputies, and these deputies elect the higher officials. In Turkey, however, the system is often the reverse: The party leadership decides who will run for office in every single province.

For the June 7 elections, the only party that broke with this hierarchical tradition was the main opposition Republican People’s Party, which held primaries for its own candidates March 29. In contrast, the ruling AKP decided upon its candidates through the office of Prime Minister Ahmet Davutoglu, and, less explicitly, through the office of President Recep Tayyip Erdogan.

Notably, this new AKP list will not include some prominent party members who have been in key positions since its founding in 2001. Among them are deputies who have served three parliamentary terms, the limit in the AKP bylaws. These include Deputy Prime Minister Bulent Arinc, one of the three founding pillars of the party with Erdogan and Abdullah Gul. Arinc recently made headlines by daring to criticize Erdogan’s overbearing style of rule, to accusations of treason. By June 7, he will retire from politics — something he apparently looks forward to. Ali Babacan, another deputy prime minister and also the successful manager of the Turkish economy since the AKP came to power 13 years ago, will also leave the parliament.

With so many AKP veterans on their way out, the party is being taken over by “youngsters,” as Erdogan often describes them. These are the people who have entered politics thanks to Erdogan’s blessing, and therefore will have no doubt about the supremacy of their leaders. Ali Bayramoglu, a secular liberal and one of the few remaining critical supporters of the AKP, pointed this out in his Yeni Safak column. The list, he writes, unveils a “defensive and disciplined” cadre of deputies, whose main quality will be “loyalty.” This may give the party the power it seeks to realize its ambitious goals such as a new constitution, Bayramoglu notes, but will also deprive it of autonomous individuals who will “take risks, suggest policies, raise initiatives.” The AKP parliamentarians will rather “follow and execute orders.”

Another observer, journalist Levent Gultekin, who has taken a quite critical tone toward the governing party after many years within the pro-AKP media, also argues that the key “code” for the newest version of the party is “absolute loyalty to Erdogan.” He even argues that this criterion led to the purge of many Islamists within the AKP universe, for the Islamists are loyal to their ideology, but not necessarily to persona of Erdogan. Another Turkey observer, academic Caglar Ezikoglu, offered a refined version of this argument, noting that not all Islamists are being purged by Erdogan, but only the “disobedient” ones. In his view, what is really being expunged from the AKP is the very reformist Islamist line that founded the party some 14 years ago by challenging Necmettin Erbakan, then the undisputed leader of Turkey’s Islamist movement. Erdogan, Ezikoglu argues, is the new Erbakan, who was seen by his followers as “the commander of the faithful.”

One such reformist and “disobedient” Islamist who appealed for candidacy but was rejected by the party’s decision-makers was Ayse Bohurler, one of the founders of the party and also one of its respected intellectual voices. As a veiled conservative Muslim, Bohurler is also known for her feminist work, including a documentary that critically examined the status of women in the Muslim world, “Behind the Walls.” When the AKP lists were announced, many who had expected to see her as a candidate were surprised. One of her colleagues, Fatma Barbarosoglu, summed up the reason in a tweet: “Politics does not like females who are subjects” (rather than objects).

All this is probably good news for Erdogan, for it is no secret that loyalty and obedience are the primary values he expects from his comrades, especially at a time of so many suspected conspiracies against him. It is not good news for Turkish democracy, though. For the cost of so much discipline and hierarchy will be the lack of self-criticism and self-correction in the ruling party. As happens in all such highly hierarchical organizations, the AKP will become a giant with blinders whose vision is limited to that of one powerful man.

Moreover, this obedient AKP group will most probably dominate the Turkish parliament after June 7 for four more years. If this parliament gives Erdogan the presidential system he so badly wants, the result will be not a system like the one in the United States, where the powers of the executive and legislation are clearly separated. The president will control both the executive and the legislative branches in full, besides appointing top members of the judiciary — and even appointing the presidents of all state universities, as Turkey’s bizarre political system mandates. With so much obedience, Turkey will miss the meritocracy it desperately needs to become the global leader it aspires to be. Worse, it will also become even more polarized by the bitter political reactions that Erdogan’s authoritarianism constantly provokes.