Turkey’s National Security Policy Document — known as the "Red Book" and infamous for designating social groups as “internal enemies” — has been taken off the shelf again. 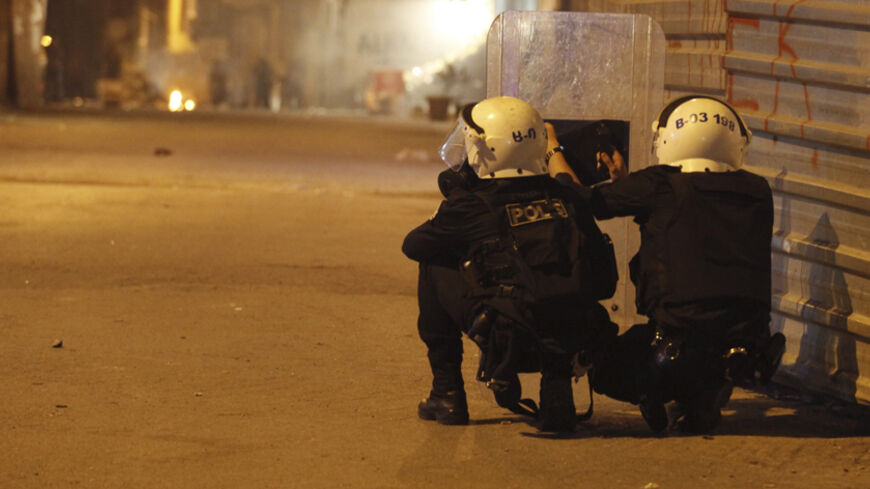 Riot police take up positions as they clash with protesters in Istanbul during a pro-Kurdish demonstration in solidarity with the people of the Syrian Kurdish town of Kobani, Oct. 7, 2014. - REUTERS/Osman Orsal

Every month, the top executives of the Turkish government and military come together for the regular National Security Council (NSC) meetings. This time, on Oct. 30, the NSC meeting broke a record in terms its length: 10 hours, 25 minutes. It also attracted much more media attention than other NSC meetings of late because, reportedly, an update in Turkey’s infamous “Red Book,” or the National Security Policy Document, was discussed. Consequently, President Recep Tayyip Erdogan’s new nemesis, the “parallel state,” will now find its place in this document as yet another “internal enemy” in the history of the enemy-rich Turkish Republic.

Turkey’s NSC was established by the 1961 constitution and was augmented by the 1982 constitution. Since both charters were drafted under the auspices of the Turkish military in the aftermath of military coups, the NSC was envisioned as an institution that would impose the red lines of Turkish generals on elected politicians. In the late '90s, the NSC even served as the headquarters of a “soft coup,” when the generals forced the Islamist government of Necmettin Erbakan — Erdogan’s forerunner — to resign.

In the '90s, Turkish society also learned about the “Red Book,” a document that is drafted and updated by the NSC to list Turkey’s “domestic and foreign enemies.” Most governments have such documents — that of the United States mentions al-Qaeda as a threat, for example — but Turkey’s "Red Book" was a bit self-styled: Its threats included not only terrorist groups, but also political ideologies or social trends. The two typical examples were “separatism,” which referred to Kurdish nationalism, and “[religious] reactionaryism,” which referred to Islamist parties or independent Islamic communities. In the early 2000s, the generals even added “missionary activity” to the Red Book, assuming that a possible Christianization of Turkey would infringe Turkish national identity.

In other words, the "Red Book," which was coined by some as “a supra-governmental constitution,” was the symbol of Turkey’s authoritarian state ideology. That is why all groups who were suppressed by this ideology — such as Islamists, conservatives, liberals, leftists or Kurds — opposed the "Red Book." They ultimately found their voice in Erdogan’s Justice and Development Party (AKP), which gradually subdued the military in the late 2000s and took the upper hand within the NSC. In 2010, Erdogan victoriously declared that the "Red Book" was updated with a much more liberal outlook. “From now on, there will be no enemy within,” he promised, adding that “foreign enemies” will also cease to exist thanks to his “zero problems with neighbors” policy. The era of “superficial worries and fears,” Erdogan declared, was over.

But, alas, it took only a few years for Turkey to revert back to the abundance of enemies. The “zero problems with neighbors” concept slowly vanished, as Turkey began to acquire plenty of problems beyond its southern borders.

Moreover, Erdogan reinvented the concept of internal enemy, first during the Gezi Park protests of June 2013 and then the corruption investigation of December 2013. He defined both of these as “coup attempts,” and condemned the Gulen movement, which apparently has many members within the police and the judiciary, as the culprit of the latter “coup.” This religious movement, Erdogan argued, created an illegal “parallel structure” within the state, with its own covert hierarchy and sinister goals.

In the latest NSC meeting, this “parallel structure” was apparently discussed as one of Turkey’s national security threats. No wonder the press release of the meeting declared, “The struggle against parallel structures and illegal formations, which threaten our national security and disrupt public order and conduct illegal activity behind legal facades, will be continued with determination.”

But there was a nuance here: It was said that the state would continue its struggle with “parallel structures.” The plural here was interpreted by many journalists as a reference to not only the Gulen movement presence within the state, but also to the Kurdistan Communities Union (KCK), the urban branch of the outlawed Kurdistan Workers Party (PKK).

One notable view came from Ali Bayramoglu, columnist for the pro-Erdogan daily Yeni Safak and a key intellectual figure in government circles. Although he has been pointing to the trouble with the “parallel state” for years, Bayramoglu opposed the NSC declaration that defined it as national security threat.

“Crime should be pursued … within the rule of law,” Bayramoglu said, “No special book is necessary.” He also said that Erdogan’s return to the "Red Book" concept gives the impression that he is “worried not about the gun, but about who holds it.”

"Red Book" will be updated officially only when Ahmet Davutoglu's government revises and signs the document according to “the suggestions of the NSC,” as the constitution says. But something is already clear. Whatever the real nature and misdeeds of the “parallel structures” are, Turkey has gone back to the days that Erdogan himself had declared as passé: There are, again, dangerous internal enemies within. And the state, once again, is taking out its iron fist to deal with them.

by Murielle KASPRZAK and Joseph SCHMID | AFP | May 26, 2022
END_OF_DOCUMENT_TOKEN_TO_BE_REPLACED