Erdogan angles to tag Gulenists as a national security threat

President Recep Tayyip Erdogan wants to include the Gulenist movement as a national security threat to Turkey. 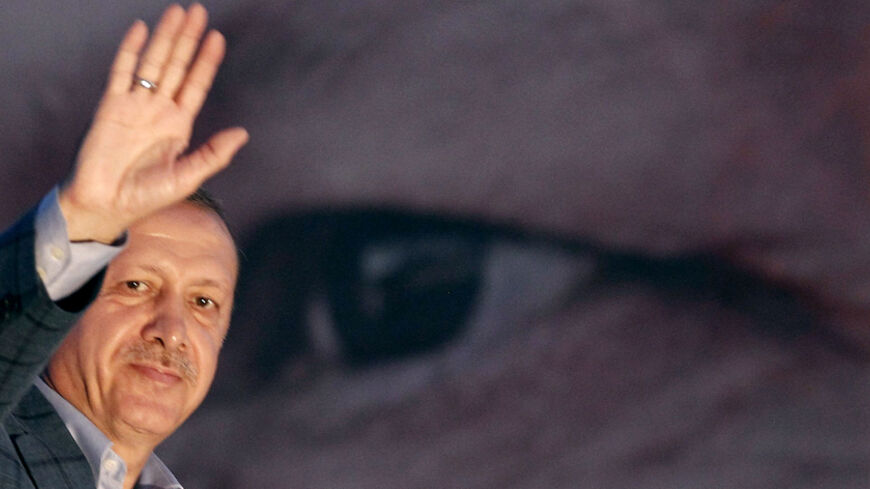 President Recep Tayyip Erdogan, in a lecture at Marmara University on Oct. 13, surprised the audience when he said, “When we convene the National Security Council [MGK] at the end of the month, my agenda will be to ensure that the National Security Policy Document addresses whatever threat there is against our country.” Erdogan’s remarks were interpreted to mean that the US-based Gulenist movement, which is accused of penetrating the state mechanism to set up a “parallel structure,” might be added to the list of “national security threats against Turkey.”

This is the first time Erdogan revealed that he would be taking his struggle with the Gulenists to a new level. Erdogan, as the commander-in-chief and the chairman of the MGK, appears determined to include the Gulenist movement as an “internal threat” in the National Security Policy Document, popularly known as “the Red Book” in Turkey.

The Red Book is prepared by the MGK, which is attended by the president, the prime minister, the defense, foreign and interior ministers, the chief of general staff and force commanders. It is a secret document known as the secret constitution of the state. Its contents are never published, but experts can guess what was discussed from ensuing council of ministers decisions and decrees. The Red Book was last changed in 2010 when religious reactionary trends once listed among internal threats were removed.

AKP deputy and columnist Mehmet Metiner wrote in the pro-government daily Star that Erdogan’s remarks were very important. According to Metiner, the “parallel structure,” while pursuing coup plots against the state, wants to confine Erdogan to the presidential mansion and distance him from politics. This is why declaring the parallel structure as a threat to national security will empower the government in its work against such plots. Such an official move would formally label the Gulenist movement as a national security threat, while until now it was treated as a criminal organization. Relevant offices will then have legitimacy in whatever steps they may take against Gulenists.

The first reaction to the news that anti-Gulenist measures will be on the MGK agenda came from the main opposition Republican Peoples Party (CHP). CHP deputy Umut Oran said, "Our constitution doesn’t authorize the president to give instructions to the MGK. But he is giving instructions to terminate the movement. Erdogan as president cannot say anything like it. It is a crime.”

Daily Zaman, known as the mouthpiece of the Gulen movement, reacted quickly. Its columnist Abdulhamit Bilici wrote Oct. 14: "It was impossible yesterday to ban expressions of thought and belief and it is impossible today. You cannot line up thoughts in front of a firing squad.”

Zaman columnist Mumtazer Turkone thinks Erdogan’s latest declarations are nothing but an effort to remain on the national agenda. Turkone says Erdogan is rapidly losing his luster. When he was the prime minister, a busy national agenda and never-ending problems allowed him to remain in the limelight, but the president’s required neutrality bothers him. Commander-in-Chief Erdogan, by keeping the magic wand of the MGK in his hand and telling the public, "I am the MGK,” wants to decide by himself what issues constitute the national security agenda.

What then is the military — which was the trust master of the MGK and decided what was a national security threat or not — saying now? The military takes seriously the allegations of the Gulenist movement penetrating the state structure, but the military emphasizes that combating the movement should occur through democratic and legal means. The statement by Chief of General Staff Gen. Necdet Ozel at the Victory Day reception Aug. 30 that legal methods should be employed in the struggle struggle against the parallel structure and that unnecessary polarization of the public should be avoided was received with interest. Ozel said: “The armed forces work with documents. We asked the police and the national intelligence for documents attesting [to] the penetration of the Turkish armed forces by the parallel structure. So far, we have gotten nothing from them. We cannot operate without firm information on the basis of unsigned informant letters. We will do whatever is needed within the framework of laws.”

A high-ranking security official in Ankara who did not want to be identified said the military high command is disturbed by constant reports of pro-government papers like Takvim, Aksam and Star that the parallel body has infiltrated the Turkish armed forces and had sent denials to these papers on various occasions.

According to this security official, the intention behind this kind of news appearing in pro-government dailies is to drag the Turkish military into the dispute and thus gain additional legitimacy in the war against the Gulenist movement. In short, if the public forms the perception that “they have even infiltrated the military,” and the military assumes an active position against the Gulenist movement, it would certainly empower the AKP government in the eyes of the public. That is why the military’s attitude in this struggle is important.

What will the military do in the forthcoming MGK meeting at the end of the month? Will it agree with Erdogan’s demands?

In Ankara’s security quarters, there is a debate on the new concept of “authoritarian civilian power,” which foresees the transfer of power on security issues from the military to civilian decision-makers. Erdogan in a way showed his intentions by appointing civilian bureaucrats close and loyal to him to the National Security Council secretariat, which has suddenly gained prominence with Erdogan taking over as president.

Until five or six years ago, the military hawks used dominate the MGK and its civilian members used to put their reservations on record. Now the roles seem to have reversed: Civilian hawks will press on the military on a subject, and perhaps for the first time ever the military will emphasize democracy, rule of law, acting with legal norms and non-polarization of the public, while the civilians will be telling the military about what is to be done for internal national security threats.

This MGK meeting could be well the starting point of interesting developments in Turkey’s military-civilian relations.