Since taking his seat as Turkey’s president, Recep Tayyip Erdogan has thrown himself into the role of commander-in-chief and drawn the armed forces closer into the political realm and manipulated security concerns to serve his agenda. 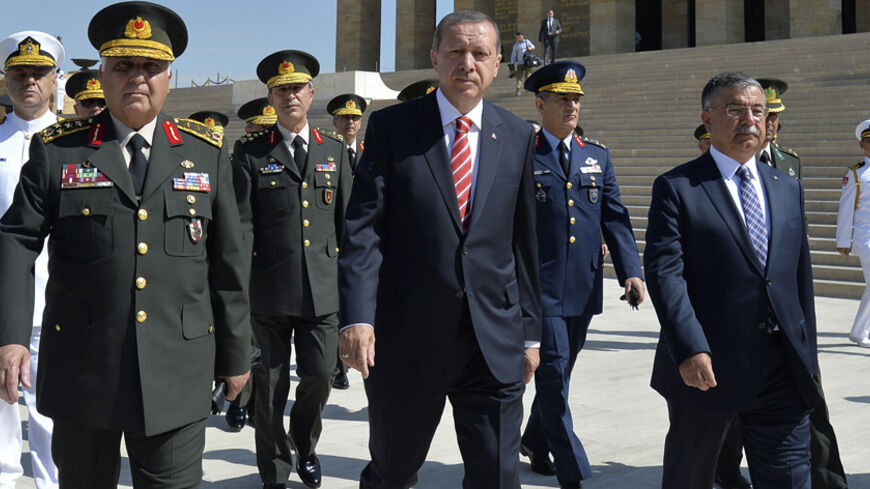 Interesting developments are taking place in Turkey’s civilian-military relations since the election of Recep Tayyip Erdogan as the president in August 2014, when the new Justice and Development Party (AKP) government also revealed its "Vision for a New Turkey." Erdogan, according to the constitution, is also the commander-in-chief of the armed forces, a label the pro-government media likes to throw around these days. There is an abundance of references to the New Turkey's powerful army, national state and strong defense industry. Also attracting attention is the sudden ubiquity of news and commentary, particularly in the pro-government media, on how the military and the government operate in full harmony in dealing with the "parallel state" of the Fethullah Gulen movement, the solution process with the Kurds, the Syrian and Iraqi crises and other regional issues.

What led to this political-military understanding in Turkey? Did the government move closer to the military, or vice versa? Frequently cited reasons for this developing alliance include:

However, I want to focus on two profound domestic political issues that I think led to this military-civilian alliance. The first is the extreme fragility of the Kurdish solution process following the violent protests over Kobani and the security shortcomings, especially in southeast Turkey.

The Kobani incidents, which appeared to be an organic reaction not fully organized by the Kurdistan Workers Party (PKK), quickly spread through the entire country and shocked the Turkish state by showing that adrenaline-fueled PKK youth have the ability to paralyze not only streets and towns but also the approaching general elections. The murders of three unarmed soldiers on leave in civilian clothes in Yuksekova and a noncommissioned officer also unarmed and in civilian clothes, all of whom were killed in Diyarbakir, rattled the government and the military.

The other domestic issue is Erdogan’s desire to weed out "parallel state" elements supposed to have infiltrated the ranks of the Turkish armed forces. By hunting these perceived enemies, Erdogan appears to enjoy the confidence of the people while compounding fears that Gulenists have penetrated the military. Erdogan has massive support from his allied media, which has been demanding the collective elimination of these infiltrators.

Since the beginning of October, Erdogan has frequently declared that he will bring the issue of the "parallel state" to the National Security Council to make it a national security issue. In a 10½-hour council meeting, the longest on record, he succeeded in militarizing what is essentially a criminal case.

Through intensive efforts by Erdogan and AKP elites, newspaper headlines filled with the council decision to combat the Gulenist movement, and at least 24 columns were penned about it.

But some worry about the military’s alleged efforts to return to the political arena. Ali Bayramoglu of pro-government daily Yeni Safak contended Nov. 1 that it was actually the military that don’t seem to have learned its lesson and want its case on the public agenda, and pointed to the importance of reminding the military of its limits.

Elif Cakir of another pro-government paper, Star, wrote Nov. 7 that because of recent events the military wants to make a political comeback. She concluded by saying she simply cannot calm her fears.

Etyen Mahcupyan, a newly appointed adviser to the prime minister, wrote Nov. 11 that a segment of the Turkish press wants to influence the military and send the public the message that “even if the AKP government stumbles, the military is as robust as ever.”

Is the Turkish military really inclined to intervene in politics and influence government decisions, as alleged by some pro-government writers? The answer is that even if the military is cooperating more closely with the government because of security concerns, Erdogan and his cohorts are manipulating security concerns for their political agenda. This may well be AKP’s way to evade political responsibility by showing the military as a stakeholder in political decision-making in the security arena while amassing ammunition for a new opponent it will identify after it has finished with the "parallel state."

One has to wonder whether the military is aware that the decisions it may make on issues such as the Syrian crisis, border security, urban street violence and training and equipping Syrian opposition forces might one day boomerang. The cautious and cool-headed attitude of Chief of General Staff Gen. Necdet Ozel suggests that he hasn’t forgotten the recent past and is aware that a political-military alliance is actually a minefield for the military. Can the soldiers who seem to have problems grasping the new political parameters of the New Turkey cross that minefield without casualties?