Turkey’s military is back in the headlines, but this time as an “injured party,” defending itself against allegations of Gulenist soldiers in its ranks. 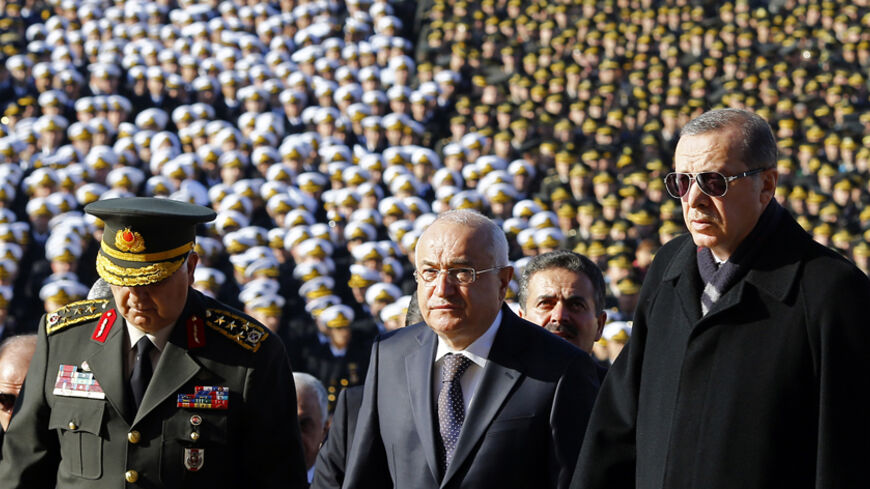 The Oct. 31 meeting of Turkey’s National Security Council was the scene of quite a heated discussion. Following the meeting, news media reports reported a rift between the government and the military on how to counter the so-called parallel structure or members of the Gulen movement who have allegedly infiltrated the state bureaucracy.

The ensuing developments appear to back up the allegations of a disagreement. Until 10 days ago, media and columnists close to the government frequently emphasized that the government and the military were in full accord on the struggle against the Gulenist movement. Yet, they now seem to have changed their strategy in the absence of any visible steps on the issue by the military.

What are the steps the government anticipates from the military?

The government expects the immediate purge of personnel, especially career officers, who figure on a list conveyed to the Turkish Armed Forces (TAF), which according to one report includes 60 high-ranking officers and according to another, 300 high-ranking officers, among them 40 generals. Speculation has also been rife in Ankara that land forces commander Gen. Hulusi Akar, in line to become chief of general staff next year until 2018, will be implicated in a judicial probe on the grounds he tolerates the “parallel structure” within the TAF.

Finally, the government believes the military has lent too little support in the struggle against the “parallel structure.” It sees the military’s support as vital in its attempt to portray the Gulen movement — both at home and abroad — as a “terrorist organization” threatening national security. Hence, the government is annoyed by what it sees as the military dragging its feet. Observers in Ankara also note that a purge in the military will greatly strengthen the government’s hand ahead of general elections next year and give it a big advantage over the opposition.

In another intriguing development, retired secularist, left-leaning and Kemalist officers who spent years in jail as suspects in the Ergenekon and Sledgehammer coup trials as well as the probe into an alleged military espionage ring in Izmir, are clearly in collaboration with pro-government media against the Gulenist movement, driven by the motto “the enemy of my enemy is my friend.” The latest example of collaboration between the two camps — at daggers drawn only two years ago — came on Nov. 21 during a program on the pro-government AHaber channel.

Retired Lt. Col. Mustafa Donmez, a suspect in the Ergenekon case, stole the show with bombshell claims that Chief of General Staff Necdet Ozel was intentionally dragging his feet in purging Gulenists from the army, that Ozel enjoyed the support and protection of Gulenist media, that his prospective successor — land forces Cmdr. Akar — was also reluctant to dismantle the “parallel structure” in the army and that Ozel was granting protection to the army’s regional commander in Adana, who allegedly played a central role in the controversy over Syria-bound trucks earlier this year that pitted the gendarmerie against the National Intelligence Organization.

The military was quick to react. In a harshly worded statement on Nov. 22, the General Staff denounced Donmez and criticized the AHaber channel. It denied the military was linked to any illegal structures and that certain formations inside the army enjoyed protection, emphasizing that army personnel accused of misconduct could be sanctioned only on the basis of evidence obtained through legal processes.

In addition, Ozel issued a personal statement, which was only the second time he has done so during his term in office. “I condemn one of the participants in the [TV] program for his groundless comments, which have nothing to do with the realities and which, I believe, are intended to smear myself and my comrades-in-arms and to misinform the public,” he said. “I will resort to legal means over his comments concerning me.”

Why did the General Staff react so harshly over the TV program, which ignited heated debates in Turkey?

Speaking on condition of anonymity, a senior military official in Ankara offered the following assessment to Al-Monitor on how the military views the controversy: “This type of media coverage and commentaries are aimed at applying pressure on the top brass, especially Gen. Ozel and Gen. Akar, who is expected to become chief of general staff in about six months for a period of four years. They also aim to stir speculation over promotions and appointments ahead of the next Higher Military Council in August. That would be very damaging to the TAF’s discipline and traditions as well as to its chain of command.

“The TAF, which has only recently begun to recover from the great trauma of the Ergenekon and Sledgehammer cases, does not want to go through another trauma. That’s why it is averse to all kind of anonymous tips and letters or lists concerning its personnel. It constantly emphasizes it will enforce sanctions on personnel only when tangible evidence is produced in a legal framework. Moreover, the TAF does not want to be the subject of political rows. The General Staff is irked that allegations of a ‘parallel structure’ infiltration in the TAF are constantly raised in the media, that such allegations are often discussed publicly and that everything on this issue is debated in a way that polarizes society. The TAF wants to handle this process with political decision-makers behind closed doors, without polarizing society.”

Those comments illustrate clearly the fundamental difference between the approach of the pro-government media, which is actually the government’s approach, and the one of the military. The government is seeking to hype an alleged “parallel structure” infiltration in the military and use it as a major political tool ahead of the elections. Also, the government, without much regard for legal processes, expects the TAF to conduct a mass purge, rolling the heads of all soldiers whose names appear on certain lists or who have been the target of media allegations.

The military, on the other hand, is cautious. It is basically telling the government it will not move against personnel on the basis of mere allegations, but will look for definitive evidence and assess personnel on a case-by-case basis as part of legal processes and, if such evidence exists, will dismiss such personnel over time. By sticking to this approach, the military aims to avoid both a new trauma and becoming the subject of controversies that would further polarize society and the military.

Whose approach will eventually prevail? It’s hard to predict. But it is safe to say that President Recep Tayyip Erdogan's and Prime Minister Ahmet Davutoglu’s attitudes in the run-up to the elections will sway the answer. Then, one could revise the question as follows: Will pragmatic impulses drive Erdogan and Davutoglu to follow the pro-government media and see the issue as populist political material or will they lend an ear to the military and opt to deal with “parallel infiltrations” in the army in a subdued manner behind closed doors and over time?