Turkish prosecutors have dropped a corruption probe against President Recep Tayyip Erdogan’s son and businessmen close to the government, marking the latest move in the government’s all-out war against the Gulen community. 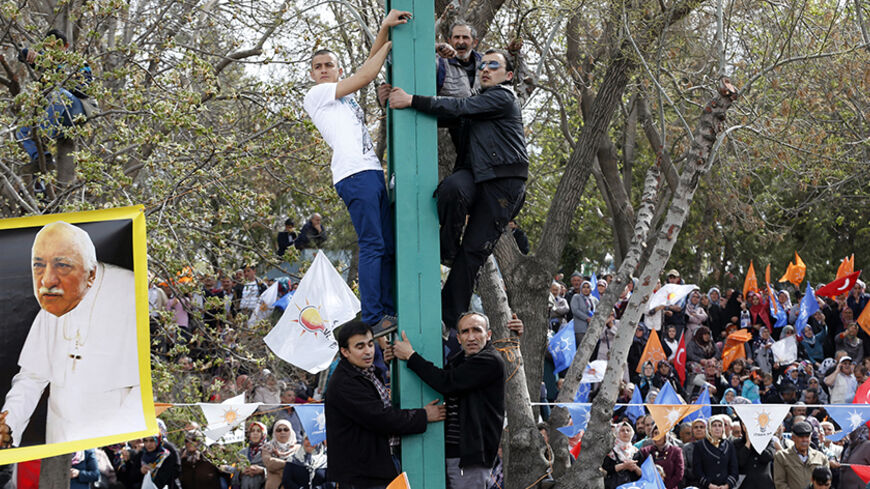 A poster depicting US-based Muslim cleric Fethullah Gulen as a pope is seen while supporters of the ruling Justice and Development Party attend an election rally in Konya, central Turkey, March 28, 2014. - REUTERS/Umit Bektas

The Turkish government responded to the Dec. 17 and Dec. 25 bribery and corruption investigations, which targeted ministers’ relatives and crony businessmen, by declaring them “coup attempts” and launching an all-out war on the Gulen movement, which it singled out as the mastermind of the alleged plot.

Since then, the Justice and Development Party (AKP) government, under President Recep Tayyip Erdogan’s leadership, has left behind the critical phases of this “civil war” against its former ally and de facto coalition partner, turning the balance decisively in its favor. The government passed its key resilience test in the March 30 local elections, losing less support than expected and retaining the two “strategic municipalities” of Istanbul and Ankara.

The timing of the Dec. 17 and Dec. 25 probes aimed to deal the AKP a heavy blow in the March 30 polls and mark the beginning of the end for the party’s electoral victories. The outcome, however, showed the operation’s architects failed to achieve their goal.

The allegations and evidence of large-scale corruption and bribery, coupled with a slew of incriminating wiretaps that hit the Internet almost daily ahead of the polls, failed to unravel the tight ranks of the Sunni conservative base surrounding Erdogan.

Erdogan and his party may have not emerged clean from the legitimacy crisis they were plunged into by the corruption probes, yet they managed to go around the crisis thanks to their electoral success. On Aug. 10, Erdogan scored a first-round victory in the presidential polls. Greatly relieved, he now has a free hand in the war against the Gulen community, which he sees as a personal matter.

In this context, it is safe to say that the government has mounted a new, strategic offensive against the Gulen movement, which appears aimed at disabling the community and purging it from almost every realm. The struggle against the Gulenists, whom the government calls a “parallel structure,” was listed among the priorities of the new AKP government led by Prime Minister Ahmet Davutoglu.

A major move in this strategic offensive was made by the judiciary on Sept. 1. The office of Istanbul’s chief prosecutor dropped the Dec. 25 bribery and corruption investigation against all 96 suspects, among them Erdogan’s son Bilal. The prosecution reasoned that the police and judicial officials who initiated the operation “attempted to stage a coup against the government in legal guise.” The prosecutors in the probe, it said, breached judicial procedures and conducted unlawful wiretaps and physical surveillance.

The preliminary report in the Dec. 25 probe, which has since been covered up, contained grave accusations against the government. The document named Bilal Erdogan as suspect No. 2, while all its content pointed to Recep Tayyip Erdogan as the person running and directing the corruption schemes at the helm. The 1,000-page investigation file mentioned Recep Tayyip Erdogan no less than 250 times.

Under the law, all wiretaps collected in the Dec. 25 probe must be destroyed within 15 days after the Sept. 1 decision to drop the investigation. Here are some of the allegations the file contains:

Transport Minister Binali Yildirim coordinated the pooling of money to help out Sabah-ATV, the main pro-government media group that was in financial trouble. Four businessmen close to the government put $100 million each in the pool, while two others contributed $30 million and $20 million respectively. The said businessmen are known as the owners of companies that routinely win the country’s largest public construction contracts. This has led to suggestions that they have made up or will make up for their financial support for Sabah through public contracts, that is, from public funds.

According to another charge, the Turkish Youth and Educational Services Foundation (TURGEV), whose executive board includes Bilal Erdogan, received donations — both cash and real estate — from businessmen close to the government who were awarded public tenders.

A third charge involves Saudi businessman Yasin al-Qadi, whom the UN Security Council designated as an individual who finances terrorism. During the period when he was banned from entering Turkey, Qadi was allowed to enter the country clandestinely, with the knowledge of officials from the prime minister’s office. He met Erdogan 12 times.

The prosecutor’s arrest warrants in the Dec. 25 operation were never executed, because the government intervened forcefully in the judicial procedures.

In a simultaneous development on Sept. 1, a third wave of detentions targeted the alleged Gulenists in the police: 32 police officers were rounded up in 16 provinces on charges of an attempted coup, espionage, abuse of office and falsification of documents.

“We can’t say this is the final one, a fourth wave may follow,” President Erdogan commented the same day.

Four of the police officers were eventually imprisoned pending trial on charges of an attempted coup, bringing to 43 the number of policemen behind bars after the three waves.

The first wave in the onslaught against the alleged Gulenists came on July 22, resulting in the detention of 92 policemen, among them senior officers, in 22 provinces. They were accused most prominently of unlawfully wiretapping 251 people of various walks of life for three years as part of an investigation into an alleged Iranian-linked terrorist organization, Selam-Tevhid, whose very existence is still in doubt. Thirty-five of the policemen were jailed pending trial. Among them were well-known figures who handled the Ergenekon and Sledgehammer coup probes in 2008-11 that dismantled the “military’s tutelage.”

In the second wave, on Aug. 5, 33 policemen were rounded up and questioned in 14 cities. Four of them were imprisoned pending trial.

In the meantime, the Gulen community is also facing a media boycott and censorship. Gulenist media outlets are largely barred from covering government functions, especially those of Erdogan, and are subject to accreditation bans.

The all-out war has a financial front as well. The AKP government wants to dry up the Gulen community’s financial sources. The main target is Bank Asya, known to be owned by Gulenist businessmen.

The bank has been under pressure on several levels for some time. The AKP-Gulenist war has led to a significant outflow of deposits from the bank, with several public agencies canceling their cooperation protocols with the institution. On Aug. 7, the Istanbul Stock Exchange suspended trading in Bank Asya’s shares, citing “uncertainties in its ownership structure,” before removing it from the Istanbul Stock Exchange indexes on Aug. 14.

Most recently, on Sept. 4, the Banking Regulation and Supervision Board (BDDK) placed the bank in the category of lenders risking the prospect of “restrictive measures,” meaning that it could ask Bank Asya to make changes in the makeup of its management and shareholders.

Finally, the Higher Board of Judges and Prosecutors (HSYK), the top organ in the judicial bureaucracy, represents the judicial battlefield in the war. Claiming that the HSYK has been seized by the Gulen community, the government has focused its attention on the coming HSYK elections on Oct. 12 as an opportunity to purge the “parallel structure” from the board. Under constitutional amendments passed in 2010, 16 of the 22 HSYK members are elected by the judiciary itself. The AKP will be contesting the elections as the “United Judiciary Platform,” the group of pro-government candidates.

The Gulen community is a deep-rooted and widespread Islamic political and social movement. No doubt, the government is not likely to succeed in completely eradicating the community or purging it from the state. Yet, the community has clearly taken very heavy blows.

The war has inflicted an irreparable scar on Erdogan and his government, yet the wound is no longer at risk of developing gangrene. The community, on the other hand, has lost much of the ground it had acquired through meticulous and patient work stretching back for decades.