The Turkish government has enacted a flurry of measures to thwart a massive corruption investigation, threatening fundamental norms of democracy. 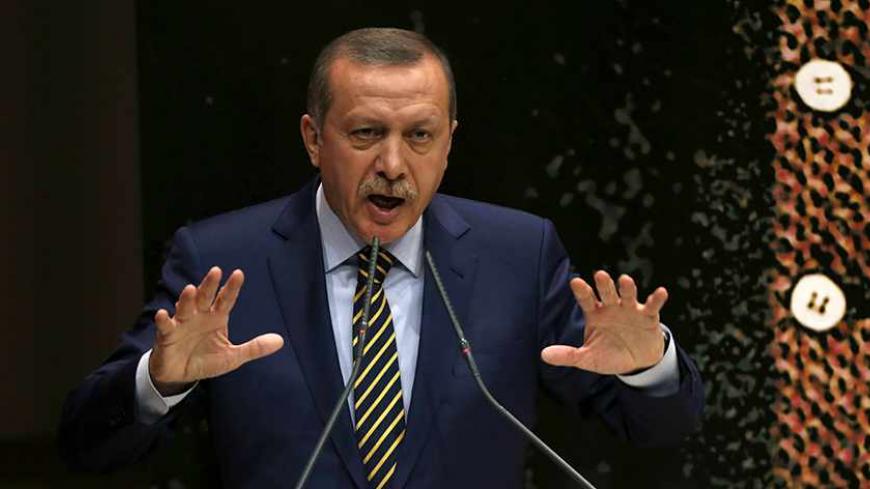 One of Turkey’s largest-ever corruption investigations is underway. A public bank CEO, an Iranian businessman and the sons of the freshly resigned interior and economy ministers are among the 24 suspects arrested so far, pending trial. The Iranian businessman allegedly circumvented sanctions against Iran and sent millions of dollars to the country via Halkbank by bribing the CEO as well as the ministers through their sons. The alleged bribes the ministers received through their sons are said to amount to 133 million Turkish lira (about $64.5 million).

The investigation file includes many other charges, including money laundering, fraud in urban construction works and the provision of Turkish citizenship to foreigners in return for bribes.

The probe — launched in strict secrecy more than a year ago by Istanbul prosecutors and a police team attached to their office — became public knowledge on Dec. 17, when police began to round up suspects, sending shock waves across Turkey. And not only the man in the street, but the government, too, appeared dumbfounded.

The shock, however, quickly gave way to furious outbursts and major interventions in the judicial process. The government, in fact, has taken almost all the steps that one could think of in terms of intervening in and influencing a judicial investigation.

In a series of daily speeches after the operation began, Prime Minister Recep Tayyip Erdogan blasted the probe and the investigators. He branded the probe a “dirty operation” and the policemen in charge a “gang.” He further said that a “trap” had been set up for Turkey, warning that they would “break the hands that set up the trap.”

Erdogan’s comments marked the onset of actual interventions in the probe. The chiefs of the Istanbul police’s financial crimes and organized crime departments, who handled the investigation, were removed from office in a snap. In a second wave, all department chiefs at the Istanbul police and some 100 others across Turkey were dismissed.

Some observers claim that the 100-odd department chiefs in question had already been blacklisted by the National Intelligence Organization (MIT) as being linked to the religious community of Fethullah Gulen during the course of long-standing tensions between the government and the community. Others, however, argue that the purge aims not only to avenge the Gulenists but also to thwart the prospect of further corruption probes.

All firings and replacements were carried out by Interior Minister Muammer Guler, whose son is accused of taking bribes on his father’s behalf. Following the purge, Guler and two other implicated ministers resigned on Dec. 25. A fourth one was removed from office in a cabinet reshuffle Erdogan announced later in the day, replacing a total of 10 ministers.

The trend signals that the pressure on police will go beyond the firings. Prosecutor Zekeriya Oz — the investigation mastermind who previously led the Ergenekon coup probes that landed many soldiers in jail — paid several “visits” to Istanbul police headquarters to “caution” the newly appointed police chiefs over allegations that they were pressuring policemen involved in the probe and obstructing the proper interrogation of suspects.

The prosecution, too, had its share of government meddling. Acting on the Justice Ministry’s behest, Istanbul’s chief prosecutor assigned two additional prosecutors to the probe. He issued written orders that the three prosecutors should take all decisions by a majority vote. It seems, however, that the government move failed to yield the desired results immediately.

The original prosecutor and his two newly appointed colleagues made a unanimous decision to seek pretrial arrest for all high-profile suspects, including the sons of two ministers, a demand the judge granted. One could assume that the hard evidence collected in the probe — wiretapped conversations between the suspects as well as photos and films showing the delivery of bribes — left little maneuvering room for the two new prosecutors. Yet, the three men are unlikely to continue acting in unison when it comes to expanding the probe in the coming days.

In the legal realm, the government’s most staggering move came with an overnight amendment of a regulation concerning the judicial police. From the very outset, government officials accused the prosecution and the police of having withheld information about the probe from their superiors. Yet, the status of the judicial police — created in 2005 as a result of European Union pressure and a lengthy struggle by bar associations and human rights groups — requires them to take orders only from the prosecutor in charge of the investigation and bars them from reporting to anyone else.

The government hastily amended the regulation, obliging the police and other law enforcement units to inform their superiors of the investigations they conduct. Had this provision existed when the current probe began, the policemen would have had to notify their superiors that they were investigating the interior minister’s son and the superiors, in turn, would have had to notify the interior minister. There is no doubt the government’s purpose in amending the regulation is to know immediately if any fresh investigation is to be launched against its members or their relatives.

The flurry of steps the government took in panic included also a decision to ban journalists from entering the buildings of police directorates and shut the press rooms in those buildings. Thus, it dealt another blow to the already crippled press freedom in Turkey.

As this brief overview suggests, Erdogan and his government have put severe pressure on prosecutors and policemen handling the investigation.

The events are reminiscent of an earlier probe — the one into the Lighthouse charity — which also had to do with corruption in government ranks. In a similar pattern, two extra prosecutors were assigned to the case to “help” the prosecutor in charge. Eventually, the original prosecutor, Nadi Turkaslan, faced various accusations, was investigated himself and was then removed from the probe. In recent remarks to the media, Turkaslan said he had no doubt that prosecutors in the current probe would face a similar fate.

If his prophesy materializes — and that’s not a distant possibility — serious trouble could befall not only the prosecutors but Turkish democracy itself.