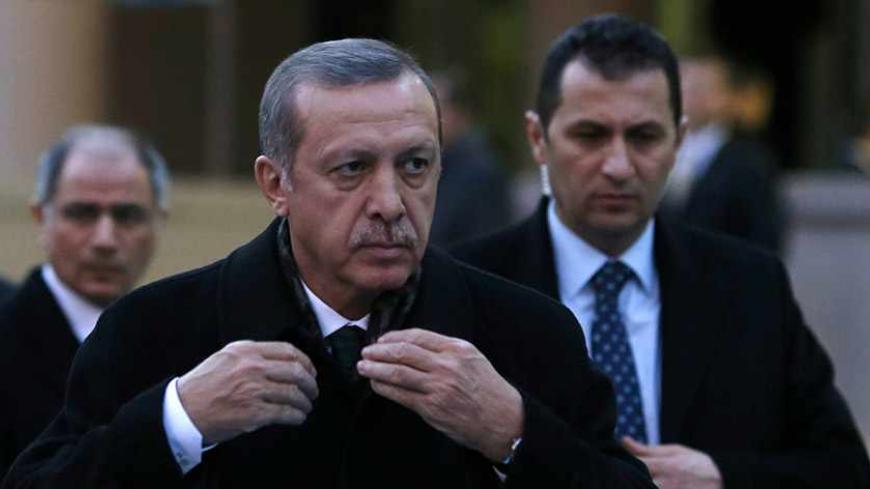 Nobody thought Turkey’s powerful Prime Minister Recep Tayyip Erdogan would be caught so off guard — not after last summer’s Gezi Park protests — as he apparently was before the major graft probe, which involves four of his ministers, including the minister of interior and his sons.

Yet, he was. As the police raided houses and offices in an operation that so far included more than 50 people and a wave of detentions, Erdogan — kept out of the loop over the inquiry — is now facing his most serious political challenge ever.

On Dec. 17, the financial crime unit of the Istanbul Police Department carried out dawn raids in Istanbul and Ankara.

Police found a total of around $5 million in cash during the raids. The amount found in the residence of Guler's son is reported to have been $750,000, while $4.5 million was found concealed in shoeboxes in Aslan's house.

The probe, which has been conducted in strict secrecy for less than two years, was three-pronged. One involves construction projects, the second the sons of the three ministers in the bribery allegations and the third Halkbank, a public bank known for alleged murky dealings with Iran.

The latter is at the core of the troubles threatening the political future of Erdogan and his ruling Justice and Development Party (AKP). As the investigation into alleged bribery linked with public tenders and gold smuggling from Iran to Turkey deepens, details emerging from the probe suggest that Caglayan received 105 million Turkish lira ($50.6 million) as a bribe in return for helping Zerrab, who was involved in irregular money transactions, according to daily Taraf.

Zerrab is accused of being involved in irregular money transactions — mostly from Iran — that total some 87 billion euros ($119 billion), sources from the Istanbul Police Department told Today's Zaman.

Zerrab has long been suspected of taking part in financial felonies. The Finance Ministry's Financial Crimes Investigation Board (MASAK) submitted a report two years ago to the Istanbul Police Department detailing transactions from abroad that indicated Zerrab's companies had participated in money transfers amounting to hundreds of millions of euros each without any actual corresponding trade.

According to a report that appeared in Taraf on Dec. 19, Zerrab paid 105 million Turkish lira ($50 million) to Caglayan to cover his money transactions and gold smuggling from Iran.

Three other ministers have also allegedly received bribes from Zerrab. Radikal and some websites posted on the night of Dec. 18 pictures showing Zerrab and other figures entering various offices with suitcases — material apparently leaked by the police.

The tension mounts as rumors suggest that the "tentacles of the octopus" reach even higher in the government. Under growing political pressure, Erdogan has been keen to show his well-known defiance.

Calling the graft probe a “dirty operation” with international links to undermine Turkey’s growing economic clout and aim to topple his government, Erdogan said, “This has both national and international aspects. Some collaborators in the country cooperated with some international circles to undermine Turkey‘s success. First, they tried to topple us with the Gezi Park protests, and now with this 'dirty operation.'” He added that he believed the Turkish people will respond to “those circles” in the March 30, 2014, local elections.

Earlier, Bulent Arinc, co-founder of the AKP and government spokesman, issued a stern warning about a counteroperation. He suggested that the probe constitutes a “psychological war” against the government, and that “they will announce in public if they can unveil a gang that is behind [this operation],” adding, “We will find those who did this in the shortest time possible. It is our duty to find them.”

Although both leaders underlined that the government will not impede the probe, what the media regarded as countermeasures followed quickly. In a matter of 48 hours, 46 senior police officials from the Istanbul, Ankara and various cities' police departments — including Istanbul’s police chief, who had been ordered by the prosecutor's office to conduct the investigation — were removed from their posts and two new prosecutors were appointed to the same investigation.

The move was seen by law experts as an efficient crippling of the inquiry as a whole. Yet, no matter what, Erdogan can't unpublish what has so far surfaced. Turkey’s once self-confident, imposing and unchallenged prime minister knows that he is in very serious political trouble.

Reports as of the evening of Dec. 19 suggested that he already had the resignation letters of his four ministers at hand, but the question is whether he will be able to move ahead toward the local and presidential elections with certainty.

It is clear he sees a "shadow state" behind the operation and holds the Gulen movement responsible. Indications are Erdogan intends to "strike back" with a massive purge within the police — he has the backing of the Intelligence Service (MIT) for his further moves — and, it is argued by many pundits, that he may in his usual impulsiveness enforce a crackdown on other figures affiliated with Gulenists and even journalists, some of whom he accused of being "spies."

But options based on impulsiveness may make things even worse. The removal of high-ranking police officials already led the opposition to accuse him of covering things up "in panic" and the harsher Erdogan reacts, the more he may prompt public reactions.

A softer option may be a large scale cabinet reshuffle. Reports in Ankara suggest Erdogan will wait until the weekend and then remove more than half of the cabinet — and that the reshuffle may even include appointments from outside parliament, such as MIT head Hakan Fidan as minister of interior.

But the storm apparently has not reached its peak yet. What the suspects could reveal may lead to a snowball effect. The amount of money involved in the probe is of astronomic proportions.

What if he can't ride out the storm? The irony is, Erdogan — and Arinc — are founders of a party that was brought to power by a massive voter base infuriated by corrupt politicians in the 1990s and a huge economic crisis that ended it.

Erdogan’s AKP is now being boldly questioned as the probe unfolds. If the storm intensifies, Turkey’s strained leader may have no other choice but to go to snap polls sooner than anybody expects.