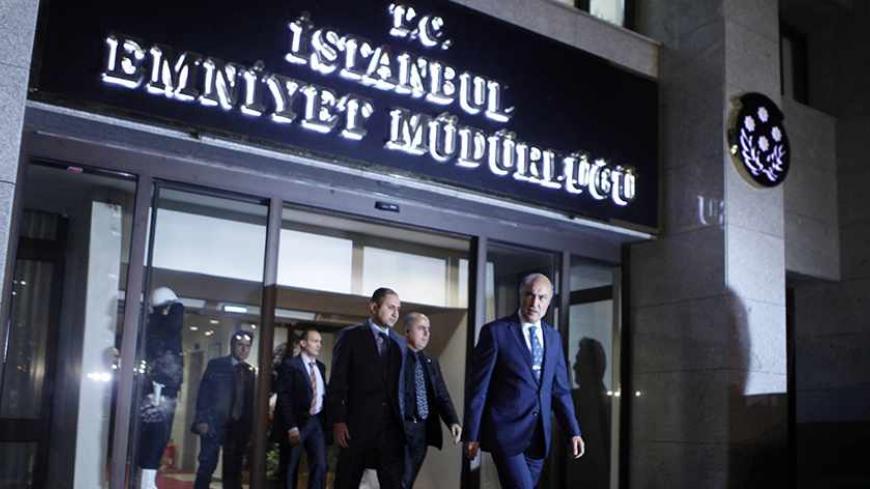 Since the morning of Dec. 17, the Turkish public has been experiencing shock waves as a result of massive anti-corruption operations, which directly concern Turkish Prime Minister Recep Tayyip Erdogan and his Justice and Development Party (AKP). There are phenomenal accusations of bribery against four major government ministers who are known to be close to the prime minister: Erdogan Bayraktar, minister of environment and urbanization; Muammer Guler, minister of interior; Zafer Caglayan, minister of economy; and Egemen Bagis, minister of EU affairs.

Sons of the first three ministers were detained by police on the morning of Dec. 17 on charges of bribery and influence peddling. On Dec. 19, the sons were being questioned by police.

On the same day, the Istanbul police launched three separate anti-corruption operations and detained 52 people. At the center of the first operation was an Iranian of Azeri origin named Reza Zarrab. According to information made available to the public, Zarrab was active in smuggling cash to Iran via Russia and China. It is claimed that Zarrab had established bribery and graft links with Guler, Caglayan and Bagis, either directly or through their sons. Zarrab is accused of distributing $63 million in bribes to the ministers. According to news reports, Caglayan is accused of taking $51.5 million in bribes; Guler, $10 million; and Bagis, $1.5 million.

On Dec. 19, the daily Taraf published police recordings of telephone conversations and visual monitoring of bribery connections of Guler and Bagis.

At the center of the second operation is Bayraktar, who is responsible for the prime ministry's Social Housing Administration (TOKI). Before becoming a minister, Bayraktar was the chairman of the powerful TOKI, which coordinates the state's mass housing investments. Among the 22 people detained in connection with this case are owners of three major construction firms: Ali Agaoglu, Emrullah Turanli and Osman Agca. They are known to be close to the government and have received big shares of TOKI contracts. Abdullah Oguz Bayraktar, son of Minister Bayraktar, is also among the detainees. They are accused of illegal and irregular construction activities, and taking and giving bribes.

The third operation was against the AKP-controlled Fatih Municipality of Istanbul. Thirty-two people, led by Mayor Mustafa Demir, were detained. Among the charges under investigation are bribes worth millions of dollars that aimed to obtain construction permits for a project that could endanger the Marmaray undersea rail transport system, which links Istanbul's Asian and European coasts.

Prosecutor Zekeriya Oz — who is well-known among those who followed the elimination of the military tutelage regime of Turkey — coordinated these three investigations. Formerly, Oz was the prosecutor in the Ergenekon mass trial of former soldiers and civilians who were accused of devising a coup, as well as the Odatv case, which was against journalists who targeted the Gulen movement.

There are two dimensions to the Dec. 17 operations that were successfully kept secret from the government: first, the colossal corruption that seriously challenges the government and, therefore, Erdogan; second, the exposure of the corrupt practices, which have occurred not as a result of independent and professional prosecutors, but as a manifestation of the dramatic struggle between Erdogan’s AKP and the Gulen movement.

None of these dimensions does change the other; corruption is corruption, and the legitimacy of those not going after it will be open to debate. The AKP-Gulen strife is a power struggle between former partners of political power. Any informed media follower will easily reach the same conclusion.

Since the Dec. 17 operation became public, the media — especially outlets close to Gulen movement — are lavishly reporting information on the investigations that should be kept confidential. In contrast, the pro-government media are not reporting on corruption accusations, the evidence uncovered and visual material made available to the media. These outlets are instead spreading the claim that the operation is a sinister conspiracy to topple the government carried out by a foreign-linked gang.

This asymmetric struggle between Erdogan’s AKP and the Gulen movement is increasingly reminiscent of a civil war within the state. It appears that there will be no winners of this fight, which is why it is important who loses more. At the moment, the most serious damage has been inflicted upon Erdogan and his government.

One question can be asked: Why were three divergent operations — with different suspects yet all with the common denominator of AKP rule and ministerial corruption — carried out on the same day?

The response, given the realities of Turkey, is: If any operation had been first conducted separately, then the two others could not have been carried out — the government would have blocked them.

Another interesting development occurred within the police force. A total of 29 police chiefs were reassigned from their positions in Ankara and Istanbul. Although most agreed that these reassignments were to punish police chiefs who kept the operations secret from their superiors, or to eliminate policemen thought to be close to the Gulen movement, there are those who believe the move was intended to prevent further investigations.

All these are indications of the AKP's damage-control efforts.

In the meantime, we can make a balance sheet of the damages inflicted on the government by the Dec. 17 operations:

First: As a consequence of these investigations, Erdogan and his party sustained very serious damage and a loss of credibility on the eve of critical political events, including the March 2014 local elections and the mid-2015 presidential and general elections. This could cause disappointment among voters and might negatively affect the ballot box results.

Second: The government cast a shadow on its legitimacy by intervening in a corruption investigation of its own members, despite what appears to be undeniable evidence. If this interference continues as the local elections approach, a loss of votes will parallel a loss of credibility.

Third: The government could not energetically defend the ministers' innocence, thus creating the impression that the allegations were accurate.

Fourth: The "corruption taboo," which is the top taboo of AKP Turkey, is done. Since 2008, the media have not published a single corruption report that might harm government interests due to self-censorship as a result of government pressure. Someone not aware of the realities might have thought that corruption in Turkey was something of the past. The Dec. 17 operation, however, proved that corruption is widespread and has reached very dangerous levels.

Sixth: AKP rule created a partisan media order by providing for newspapers and TV stations that had experienced financial troubles to be taken over by the state to crony capital owners. This has not collapsed, but it has certainly lost its power because of the investigations. The censorship pressure of the government could not stop the news flow. As I finish this article, Huseyin Capkin, top police chief of Istanbul, was added to the list of policemen removed from their posts.