Is Turkey's military returning to politics?

There are many and varied opinions about whether the military plans to intervene in Turkey's politics. 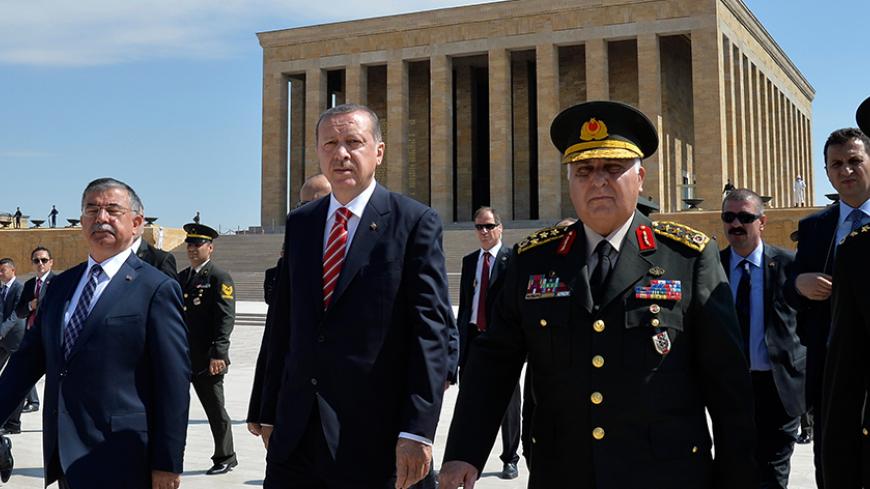 An analysis of Turkey's recent political history reveals its military’s interventions in civilian politics are prompted by any of three major developments: domestic political crises, security threats from neighboring counties and military struggles with the Kurdistan Workers Party (PKK). All these key elements prevail today, encouraging a flurry of news and comments in local and foreign media that the mood in Turkey is exactly what the military wants.

For example, journalist and academic Halil Karaveli believes that the crisis environment in the country has returned the military to politics, and that the ruling Justice and Development Party (AKP) government, which has put an end to the solution process with the Kurds, has submitted to the armed services. Karaveli is a senior fellow with the Turkey Initiative at the Central Asia-Caucasus Institute & Silk Road Studies Program Joint Center and managing editor of its publication, The Turkey Analyst. He thinks that the military now controls the AKP.

According to Sezin Oney, also a journalist and academic, there is a growing symbiotic relationship between AKP decision-makers and the military. Oney says a supra-political AKP-military coalition is being shaped. Their common enemy is the Kurds' politics, and its slogan is “Powerful state, powerful nation and powerful army.”

Is the military truly returning as the leading actor in domestic politics, or is there an AKP-military coalition in the making?

To date, there has been no objective and academic study made to verify that the army is intervening in politics. Retired Gen. Oktay Bingol, coordinator of the Ankara-based Central Strategic Institute, said the return of the military to politics is so far an unproved perception. That perception arises from the military being the strongest body that has remained out of politics, and its prestige with the public is as strong as ever.

"Turkey’s inescapable burden of having to cope with security issues of the Balkans-Middle East-Caucasia requires overlapping of the political institutions and security bureaucracy. As in Western countries, today civilian-military relations require integration beyond cooperation,” Bingol told Al-Monitor. He said this level of integration, which is not common in Turkey, creates the perception that the army is coming back to politics.

Retired Gen. Ahmet Yavuz told Al-Monitor that just because opportunities have presented themselves doesn’t mean that the military is coming back.

“As much as [there are] opportunities for intervention, the willingness of the Turkish Armed Forces to intervene is also important,” he said, adding that AKP’s misguided political stances on the PKK and Syrian politics have pushed the armed forces rumor to the forefront, because the military is still the only institution that works on a system of merit.

Zeki Sarigil, an associate professor at Bilkent University known for his studies on civilian-military relations in Turkey, said that although there have been many chances for the military to intervene, he hasn’t observed any systemic desire by the military to do so. He told Al-Monitor: “I characterize the current period as the post-military tutelage. Both in the solution process with the Kurds and in the Syrian crisis, civilian decision-makers did not really respect the military’s expertise in these fields it excels in. But, the military saw how civilians can interpret the law and democratic norms to their liking. This has created a crisis of confidence in the military vis-a-vis civilian politics. But this confidence crisis is not of a nature that will lead to direct intervention in civilian politics as in the past.”

In fact, looking at past decades, one sees that what has transpired in civilian-military relations in Turkey is not democratization, but “authoritarianism of civilian rule.” This authoritarianism can be defined as a transfer of political power from military hands to civilian decision-makers. Because of this authoritarian trend, we notice how the public is not informed about developments in the defense industry and in defense procurement, and the meek auditing and supervision by parliament and civil society.

Sarigil also noted that in the post-military tutelage phase, the personal pragmatism of President Recep Tayyip Erdogan and military realism have been in frequent conflict. Not to be forgotten are the Aug. 31, 2014, words of Gen. Necdet Ozel, who was then the chief of the armed force's general staff. Speaking at the time of the AKP’s solution process with the Kurds, Ozel said in a bombshell of a statement: "The government has a policy that is ongoing. We don’t know the road map for the solution process. We are not involved in that affair.’’

We also know that the military's realism was the most effective braking mechanism for the AKP government’s romantic idealism for a military intervention in Syria and declaring a no-fly zone.

It is not a secret that the views of the AKP and the military don't mesh on purging the pro-Gulenist elements said to have infiltrated the armed forces.

Also attracting attention now is how the military high command is refusing to send soldiers into inhabited locations, despite politicians' demands. There are also other areas where the army can say no to Erdogan, such as the armed forces' determination to stay out of politics without rupturing its realist position on Syria, its refusal to conduct a mass Gulenist purge in its ranks and its adherence to close relations with NATO and the United States.

To summarize, although there are opportunities, the military is unwilling to intervene in civilian politics, at least for now. How long will this unwillingness continue? That depends more on the army than on the wisdom of Ankara politicians.