The turbulence in the wake of the recent elections may offer the Turkish military opportunities to return to politics — and even if a serious deadlock ensues, the situation still may work in the military's favor. 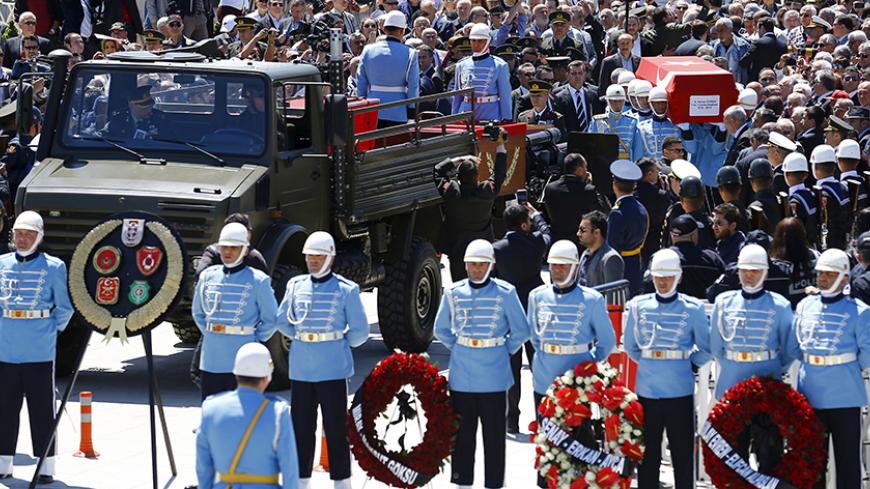 Soldiers carry the coffin of Turkey's former army chief and President Kenan Evren during his funeral in Ankara, May 12, 2015. - REUTERS/Umit Bektas

In most well-developed democracies, if you wonder aloud what the armed forces think of election results, you'll likely hear, “Who cares?” But in Turkey, although the military appears to have withdrawn from politics after 2002, many are asking this question in the aftermath of the June 7 elections. Why?

The 2015 elections ended the 13-year single-party rule of the Justice and Development Party (AKP). The options being debated now are a coalition government, a minority government or early elections. All this means at least three months of political turbulence in Turkey, possibly offering the military opportunities to return to politics after being kept out for a variety of reasons, such as EU reforms, a strong single-party government's robust stance against the military, the determination of AKP elites to concede nothing and the increasing sensitivity of the public to military intervention in politics. But if national politics are seriously deadlocked in the aftermath of the elections, the situation may work in the military's favor.

Trying to understand how the Turkish military perceives the election results may offer clues about its position. To that end, Al-Monitor conducted in-depth interviews with 10 serving and retired senior officers in Ankara and Istanbul.

The central topic was the unexpected success of the pro-Kurdish Peoples' Democratic Party (HDP). This party, whose political background the Turkish military traditionally defines as a parliamentary extension of the Kurdistan Workers Party (PKK) terror organization, received 6.5 million votes and 80 parliamentary seats.

All the officers who spoke to Al-Monitor were dazed by the HDP’s achievement and shared one of two takes on the matter. Most of them see its success as a disturbing development that could lead to security chaos in the country. According to this group, the PKK now has the strategic upper hand. In many eastern and southeastern provinces, where the majority of Kurds live, the PKK holds de facto field supremacy and the state's authority and is severely impaired. They fear the PKK’s perceived upper hand may well turn into a permanent political supremacy following the HDP's electoral success.

It is because of this perception that seems to prevail in the military that the Turkish Armed Forces (TSK) has been resorting to tougher and less tolerant security measures on the Iranian, Iraqi and Syrian borders with Turkey’s Kurdish-populated provinces and also in combating cross-border smuggling, which is not really the military's task.

A minority of the officers interprets the HDP success with guarded optimism and sees it as an opportunity for the HDP to become more a part of Turkey. This minority feels that because of the high percentage of votes it got from western Turkey from the secular and urbanized middle classes, the HDP will have to abandon its ethnic politics and the PKK will be forced to give up armed violence.

One retired officer's assessment was particularly interesting. He said, “This success of the HDP tells us that it is time to start discussing something we have never discussed before: civilian-military relations in Kurdish policy. The only armed political actor outside the state today are the Kurds. Just as the TSK has gone back to its barracks because of democratic and civilian demands, the armed Kurdish actors must leave the field to civilian Kurdish politics. The HDP with its major success will defend their rights strongly in the parliament, but I don’t think that the PKK, nourished by violence, will give up and leave the field to civilian Kurdish politics. They tried that after 1999 but couldn’t do it."

It is therefore no stretch to say that a vast majority of the military — although there are softer views among them — are disturbed by what they see as the first step toward chaos. To prevent this wariness from spreading, the HDP will have to take confidence-building steps to show how it is becoming a part of Turkey, and the military wing of the Kurdish political scene has to be brought under democratic and civilian control.

Another retired officer said, “Just as people get upset when Turkey’s chief of general staff speaks out, they have to show the same reaction when an armed Kurd speaks out. If you ask me, this success by the HDP shows the shrinking significance of armed violence in the Kurds' quest to defend their rights.”

Another subject discussed was the impact of the election results on Turkish foreign policy, above all Syria. Most of the officers Al-Monitor spoke with emphasized national legislation and international law when speaking about Syria; all of them agreed that all international engagements about Syria must be based on legal justifications and not go beyond them.

One of them explained, "The main reason why the train-and-equip program is still stalled is precisely this. The TSK is concerned about legal responsibilities that could be attributed to Turkish officers and noncommissioned officers if the people they train are one day involved in terror acts inside or outside the country. The US is not a party to the International Criminal Court. They have no such worry.”

Another issue the military emphasizes is the need for uninterrupted progress in the enormous transformation and restructuring projects the TSK has initiated. For example, today there are 144 transformation projects in the Turkish Land Forces, derived from more than 1,000 proposals. The military is concerned with whether the election results and a possible coalition government or the potential political turbulence will affect the TSK’s transformation process.

Dealing with the officers adhering to the teachings of US-based cleric Fethullah Gulen is a minefield for the military. Before the last elections, there were media reports that a list of 1,200 suspected Gulenists was prepared by the national intelligence service and sent to the chief of general staff to be used for mass purges or individual investigations.

None of the officers wanted to answer questions about Gulenists who may have penetrated the TSK ranks, indicating a great taboo. Decisions on this issue will have profound effects on the TSK.

The Supreme Military Council is scheduled to meet at the beginning of August. Gen. Necdet Ozel, the chief of general staff who since 2011 has skillfully steered the TSK through choppy waters without making concessions in terms of law and democracy, will be retiring. His replacement, the fate of Gulenists in the TSK, the TSK’s transformation and restructuring process and of course the Syrian crisis will all be on the agenda. We don’t yet know who will chair this critical meeting because we don’t yet know who will be the prime minister. But here we must note that to be implemented, Supreme Military Council decisions have to be approved by the president, no matter how much power he may have lost in the elections.