Will PKK let Kurdish politics move away from violence?

With the success of the pro-Kurdish HDP in the recent elections, the time has come for Turkey's Kurds to rethink civilian-military relations in Kurdish politics. 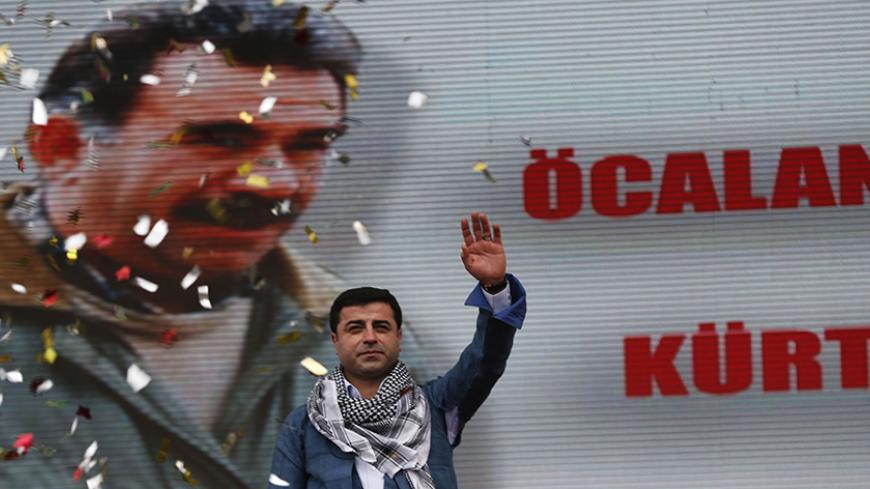 Selahattin Demirtas, co-chairman of the pro-Kurdish Peace and Democracy Party, greets his supporters during a rally in Istanbul, March 17, 2013, with an image of Kurdistan Workers Party leader Abdullah Ocalan seemingly watching over him. - REUTERS/Murad Sezer

After the pro-Kurdish Peoples’ Democratic Party (HDP) won 6 million votes June 7, surpassing the required 10% election threshold, the question of the day was: Where did these votes come from? According to Erik Meyersson, an assistant professor at the Stockholm School of Economics, about 1.5 million conservative Kurds had decided not to vote for the Justice and Development Party (AKP).

His finding was confirmed by A&G polls that determined of the overall 13.1% the HDP received, 4.2% came from former AKP voters and 1.9% from former Republican People's Party (CHP) voters. About 18% of the votes for the HDP — about 1.1 million — came from Turkish voters with no ethnic connection to the HDP.

Adil Gur, who conducted the poll, offered this analysis: “If the HDP turns inward and opts for politics based on its Kurdish identity, the borrowed votes are likely to revert back to the parties they came from.”

It's now possible to say that the HDP's unexpected success may well bring into question the legitimacy of armed resistance, the traditional tool of Kurdish politics. Will this success motivate the HDP to aspire to become a catchall party that will distance Kurdish politics from violence?

An official statement from the Kurdistan Communities Union (KCK), known as the umbrella organization of the Kurdistan Workers Party (PKK), was a definitive rejection of that idea.

Salient remarks from the KCK statement included: "We must openly declare that the question of the PKK giving up its armed struggle against Turkey and the decision to do so is exclusively up to us. Everyone must understand that the HDP is not a legal party of the PKK. Therefore, neither the HDP nor Abdullah Ocalan, with his conditions in Imrali, can make such a call.”

Clearly, the PKK does not recognize the HDP’s civilian authority and will not be bound by it. The KCK declaration goes on: “To expect the PKK to give up its arms while only yesterday there were armed assaults against our people in the streets of Amed [Diyarbakir] and while there are absolutely no guarantees for the free and democratic lives of Kurdish people means entrusting the lives and existence of our people to their executioners. No one can demand this from the PKK.”

This is yet another sign that the Kurdish group, as the only armed power apart from the state in Turkey, is caught between the HDP's potential to become a major party and the PKK's persistence in maintaining its armed capacities. The PKK's unwillingness to submit to civilian control is problematic for the chances of Kurdish politics to become truly civilian. This problem is further compounded by the reality that the armed Kurdish groups existed before civilian ones, and the prevailing perception that it was the armed struggle that gave life to Kurdish politics.

After the elections, Al-Monitor tried to speak to three HDP officials about this issue. Two did not want to speak about it. Another senior HDP official, who spoke on condition of anonymity, said, “It is possible to say that within the HDP there is a strong militarist wing nourished by Kurdish ethnic nationalism. I don’t think that this wing will allow civilian Kurdish politics to gain supremacy. What sort of civilian political control can you have in a party whose headquarters are tapped by the MIT intelligence service and the PKK?”

Taraf's Sezin Oney, who closely follows Kurdish politics, also believes that the PKK is not keen to open up to civilian politics. Oney told Al-Monitor, “In Kurdish politics there is an invisible clash between the civilian and military wings. After the elections, the realities of those in the mountains and those in the valleys below have really diverged. The civilian, liberal left wing of the HDP is somewhat concerned because they fear that the Kurdish nationalists among them may want to revert to ‘factory settings.’ If the HDP’s ultimate political goal is autonomy, then it has to emphasize its ethno-nationalism and focus on east and southeast Anatolia, where most Kurds live. But if the HDP’s goal is become an integral part of Turkey, then it must try [to] build a constituency in the west of the country. This is the core of the serious debate on the party’s strategic vision.”

Oney doesn’t think that the PKK will disarm in the coming months. “For that, you need a truly robust political will in Turkey. [President Recep] Tayyip Erdogan could have done it. But if you ask me, Erdogan, who now thinks he was stabbed in the back by the HDP, will not be so eager to stand behind the solution process. Despite the growing civilian authority in the HDP, for the PKK to refrain from disarming could be gangrenous for it the medium term.”

The news from east and southeast Turkey, where Kurds mostly live, talks of a trend of individuals arming themselves.

Local sources say escalating tensions between the PKK, with its leftist and secularist characteristics, and Huda-Par, with its jihadist doctrine, play a major role in this trend of acquiring personal weapons, which also means the militarization of an already feeble Kurdish civil society.

Hasan Selim Ozertem of the Ankara-based think tank International Strategic Research Organization rules out the PKK disarming in the short term. Ozertem told Al-Monitor that the PKK will focus on its stature as a military power against radical Kurdish Huda-Par and the Islamic State (IS) and to preserve its recent gains. “On the other hand, the PKK, which has shifted its weight to Syria, may opt for political moves in Turkey’s cities instead of disarming or launching a major armed struggle to gain rural support," Ozertem said. "What is important now is how the HDP will transform the demands of Kurdish politics to legitimacy politics and how the new government’s attitude supports the efforts of Kurdish politics.”

Can’t Kurdish politics emulate the progress made by Turkey over the past 10 years in the democratization of civilian-military relations? In other words, isn't it possible for the military wing of the Kurdish politics to allow more room for the HDP to operate in the decision-making process and thus diminish the militaristic pressure?

The first is the undisputed leader of the Kurdish movement, Ocalan, and the other is the shining new star of the HDP, Selahattin Demirtas.

The relationship between the civilian and the armed wings in Kurdish politics will be determined by Ocalan’s decision on the direction Kurdish politics must take and how strong Demirtas and his team can stand against the military wing.

As a former military man, my humble advice to the "civilians" in Kurdish politics is to study the rich literature on the changes in Turkey’s civilian-military relations and adapt what they find relevant to Kurdish politics. What the PKK needs is precisely the experience of the Turkish military in submitting to democratic and civilian authority.

We will have to wait and see whether the PKK will derive lessons from the Turkish experience and open up space for civilian Kurdish politics, or hold off in the name of security.