Will Abdullah Gul return to politics?

Following the Justice and Development Party's loss of its parliamentary majority, eyes and ears have turned to the former president and AKP co-founder amid speculation about his next move. 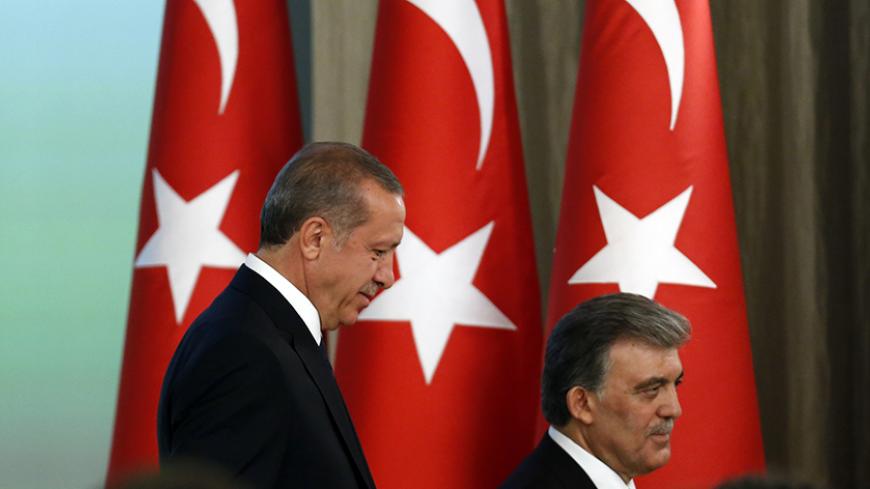 Former Turkish President Abdullah Gul is back in the news following the Justice and Development Party's (AKP) loss of the parliamentary majority it had enjoyed for more than 12 years, an unexpected development that has left it facing the prospect of joining a coalition or opting for early elections. There is much talk about Gul taking over the AKP after incumbent Prime Minister Ahmet Davutoglu’s poor electoral performance. Gul, along with President Recep Tayyip Erdogan, is a founding member of the AKP and still has a base of support within the party. He appears happy, however, to sit on the fence for now, responding indifferently to the question of returning to active politics.

For the time being, Gul prefers the role of the veteran politician who dispenses words of political wisdom for the sake of the country's stability. According to media reports, Gul called Erdogan and Davutoglu after the June 7 vote to urge them not to push for early elections, but to concentrate on a workable coalition to head off further political uncertainty.

In the meantime, revelations about Gul’s presidency in “12 Years with Abdullah Gul,” a book just published by his former aide Ahmet Sever, has stirred the cauldron at this sensitive moment, fueling speculation about Gul’s political future. The book highlights the political rift between Gul and Erdogan on issues pertaining to democracy and the rule of law, especially after the nationwide demonstrations in 2013 surrounding the Gezi Park protests and the corruption probes later that year involving key government ministers during Erdogan's tenure as prime minister. Prosecutors had sought to question Erdogan’s son Bilal in connection with the charges, which were subsequently dropped as a result of legislative changes and blatant intervention by the AKP government in the judiciary and police.

Sever argues that despite the growing rift, Gul preferred to remain silent for the sake of Turkey's political stability, a fact his detractors use against him today. It is no secret, however, that after being elected president in August 2014, Erdogan did not want Gul to head the AKP, and consequently serve as prime minister, for fear that Gul would not be compliant and would instead pose an obstacle to him and his plans to become Turkey’s sole leader. Gul is known to be opposed to tampering with Turkey’s parliamentary system. With the elections, however, circumstances have changed radically, and Erdogan might now have no choice but to accept a formula that puts Gul back on the scene politically.

Many Turks who do not support the AKP would be more at ease with an AKP-led coalition headed by Gul, given his position on democracy, which contrasts sharply with Erdogan's. Gul is also keen on Turkey’s bid for membership in the European Union. His supporters argue that he would return Turkey to its traditional foreign policy and abandon those that have left the country isolated and with little say over regional issues.

Western diplomats in Ankara sounded out by Al-Monitor also think that with Gul at the helm, Turkey’s chances of regaining its lost international influence would be much better. They nevertheless expressed frustration with Gul over his seeming procrastination with regard to returning to politics.

“There is much talk about Gul today, and it is true that he could be a game changer, but to be honest, we are a bit disappointed in him,” said a senior Western diplomat who wished to remain anonymous due to the sensitivity of his position. “He seems to want power handed to him on a platter, without taking any risks. But now is the time to step forward if he wants to play a role, and yet he is not in any rush.”

Western diplomats also recall the less-than-commendable role Gul played during the Gezi Park protests and the “17/25 December corruption probes,” as they have come to be known. While president, Gul endorsed the government’s censorial Internet law and the law that effectively placed the judiciary under the control of the Ministry of Justice.

Sever says that Gul regrets this today and believes the ministers implicated in corruption charges should have been tried. He also asserts that Gul believed in 2014, when it was clear Erdogan was going to run for president, that if he had decided to run as well and had won, Turkey would not only be a less divided country, but would also be respected internationally for following a more realistic foreign policy.

These are moot points, however, since Gul chose not to run, reportedly because he was concerned about clashing with Erdogan, which he believed would not be good for the country. “You cannot have two artists on the same tight rope” is how, according to Sever, he described his predicament at the time.

This seems ingenuous to say the least. If Gul was as concerned about the harm being done to Turkey’s democracy, especially in regard to freedom of expression and the separation of powers, as Sever claims, then he should have spoken out, even if it meant clashing with Erdogan. The situation that emerged after he deferred to Erdogan turned out to be far more damaging for Turkey.

Some also doubt that Turkey’s foreign policy would change for the better under Gul. Murat Bilhan, an active diplomat when Gul was foreign minister during 2003-2007, told Al-Monitor that it was with Gul in the Foreign Ministry that Ankara began opening to the Islamic world in a manner that suggested it was moving away from the West.

“Of course Turkey should have developed ties with the Islamic world, but not in a way that suggests it is changing tack in its overall foreign policy orientation,” said Bilhan, who currently heads the Turkish Asian Center for Strategic Studies. He conceded that Gul is a strong supporter of EU membership and might today be a changed man after all that has happened. Bilhan, nevertheless, remains skeptical. “I am not so sure that there can be a serious revision of Turkey’s foreign policy as long as the AKP is in power,” he said.

Levent Gultekin, an AKP expert who writes for the Internet paper Diken and is a frequent commentator on major TV channels, believes that Gul will stay out of politics unless there is a strong and unified call from the AKP for him to return. “If this call doesn’t come, he will not return,” Gultekin told Al-Monitor, adding that the call is unlikely because the party remains under the shadow of Erdogan.

“But assuming that it did come, then Gul will be faced with a completely different AKP than the one he left in 2007 [to assume the nonpartisan post of president]. Everything, from its cadres to its orientation, has changed. The first task he will have is to pull the party back to its original settings,” Gultekin said. “Gul may bring a breath of fresh air, but the AKP really has no future as a party without Erdogan. Erdogan’s influence will remain, so it is not certain that Gul would succeed even if he were to assume the party leadership.”

Gul may have supporters in the AKP, but he also has opponents who believe he let Erdogan down at a critical moment in the lead-up to the June 7 elections by refusing to canvass for the party. Abdulkadir Selvi, who writes for Yeni Safak, considered a mouthpiece for Erdogan and the AKP, reflects their anger. According to Selvi, Gul cannot vie for the AKP leadership against Erdogan’s wishes. “If Erdogan does not want him, and Davutoglu does not step aside, then it is out of the question for Gul to run for the party leadership,” Selvi said.

Sever says Gul “is not desperate to return to politics,” but adds, however, that if he does return, it would be on his own terms. Asked by the daily Hurriyet what these terms are, Sever said Gul would not want a double-headed administration: “His thinking is, ‘I will become prime minister, but not let anyone interfere with me.’ He will say [to Erdogan], ‘As president, you will have to stay within legal limits, the way I did. In other words, I will be the kind of prime minister you were.’”

With so much speculation and controversy surrounding his name, the chances of Gul returning to politics anytime soon appear slim.