Erdogan may become president but next prime minister unclear

Uncertainty over who will succeed Recep Tayyip Erdogan has caused disquiet in the AKP's ranks. 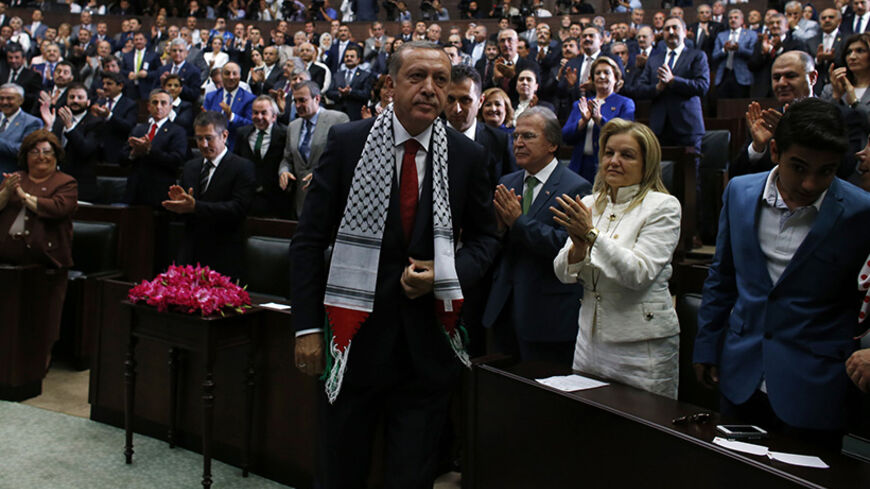 With less than two weeks to go for Turkey’s first direct presidential elections Aug. 10, Prime Minister Recep Tayyip Erdogan remains the most likely winner, with polls predicting he will receive least 50% of the vote. Who will succeed him as leader of the Justice and Development Party (AKP), and consequently as prime minister, however, remains uncertain. This is a matter of vital importance to Erdogan, as it has serious implications for his presidency.

Polls conducted among AKP members show that incumbent President Abdullah Gul remains the most favored name to head the party and become prime minister. There are indications, however, that Erdogan does not want Gul in this position.

Another AKP figure bandied about in this context is Foreign Minister Ahmet Davutoglu. But Davutoglu is a lesser name whose popularity within the party falls far short of Gul’s, and whether he can maintain party unity is questionable.

Erdogan has declared his intention to exercise executive powers as president in ways that are currently not facilitated by the constitution. He has also signaled that he wants a presidency that is unencumbered with the kinds of checks and balances the US president faces. Erdogan says that this is the fist time the president will be elected by the people in Turkey, which will effectively make him “the leader of the nation.” The present constitution, however, defines a parliamentary system. It gives the president certain powers but the prime minister is the head of the executive branch.

Erdogan therefore needs a unified AKP that will win a strong victory in the general elections planned for 2015 in order to change Turkey’s political system into the constitutionally defined presidential system he desires. This will require an AKP head who can prevent a leadership struggle after Erdogan that would weaken the party. Erdogan also wants the next AKP head and prime minister to comply with his presidential directives, at least until the system can be changed to a presidential one.

All of this is proving to be a tall order for Erdogan, requiring a lot of factors to fall into place the way he wants. He is aware, however, that if things do not go as planned, he could easily end up trapped in the presidency with less power than he hopes to eventually wield.

Meanwhile, all eyes are on Gul, but he does not appear to be ready or willing to play second fiddle to Erdogan. It remains an open question as to whether he will eventually become the AKP leader. Remember that Gul declared in April that he had no political plans for the future, sending shock waves through the AKP. The move was taken as a sign that Gul does not want to obstruct Erdogan’s path to the presidency by running for this position himself. After all, they founded the AKP together. But it was also taken as an indicator that he is not interested in becoming a prime minister that is at the president’s beck and call.

Following Gul’s announcement, the AKP set about searching for a new leader to replace Erdogan, but has failed thus far. Despite his previous remark, Gul raised hopes in the AKP recently when he signaled that he might not leave politics after all. Addressing a group of businessmen during an Iftar dinner in Istanbul on July 6, Gul said he would continue to serve the nation in the future, hinting, “As to the subject you are all curious about today, I can say this much: What the nation says is what will determine my tasks from now on.”

Shortly after Gul’s remark, deputy prime minister and AKP spokesman Minister Bulent Arinc told Hurriyet that the AKP would be holding its party congress in October, adding that if AKP delegates called on Gul to head the party, Gul would not refuse.

However, a new indication that Erdogan in not happy with the idea of Gul heading the AKP came within days of Gul’s and Arinc’s remarks. Abdulkadir Selvi, the Ankara representative and columnist for the pro-government Yeni Safak — a man who is close to the Erdogan camp and frequently interviewed for that reason — wrote that there was serious disquiet within the AKP with regard to the succession question.

Much more crucially, however, Selvi added somewhat cryptically that he “cannot conclude that the future vision that Erdogan has drawn up for himself until now includes Abdullah Gul as a priority matter.”

Indicating that Erdogan was very disturbed about the speculation on the succession question inside and outside the AKP, Selvi went on say he did not believe this highly critical process within the party would be overcome painlessly. Given Selvi’s closeness to the Erdogan camp, his remarks immediately fueled the kind of speculation that he says is disturbing Erdogan. But no one came out to deny what Selvi wrote. Many believe now that there is a power struggle looming within the AKP — unless, that is, Gul enters the scene.

Erdogan has also made remarks in the past few days to suggest he may be trying to reduce some of the unease within the AKP on the succession issue and the kind of relationship he intends to have as president with the prime minister.

Talking to reporters on his campaign trail in the Mediterranean province of Hatay a day later, Erdogan reiterated that he intends to be an active president. “But I will not weaken the hand of my friend who becomes prime minister. He will also be elected. We will walk together hand in hand,” he said.

This, however, is too neat a scenario, requiring an elected president and an elected prime minister working in harmony and not stepping on each other's feet. Few political observers in Turkey have a clear impression of how this kind of government will work until the AKP has the power to change the constitution and introduce a fully fledged presidential system.

There is the very real possibility that the AKP will not have the power to change the constitution in the end. Instead of coming out stronger, the AKP may emerge weaker, even in the next presidential elections, due to increasing domestic problems and the uncertainties resulting from a series of foreign policy blunders.

Erdogan could then find himself in a political limbo a year down the line, after he is elected president, and far from where he dreams of being. This is a major dilemma for him with less than two weeks to go before the election.