Pressure grows for Gul to be more assertive

There are some who see Abdullah Gul as a better bet than Prime Minister Recep Tayyip Erdogan for the presidency and the future of the Justice and Development Party. 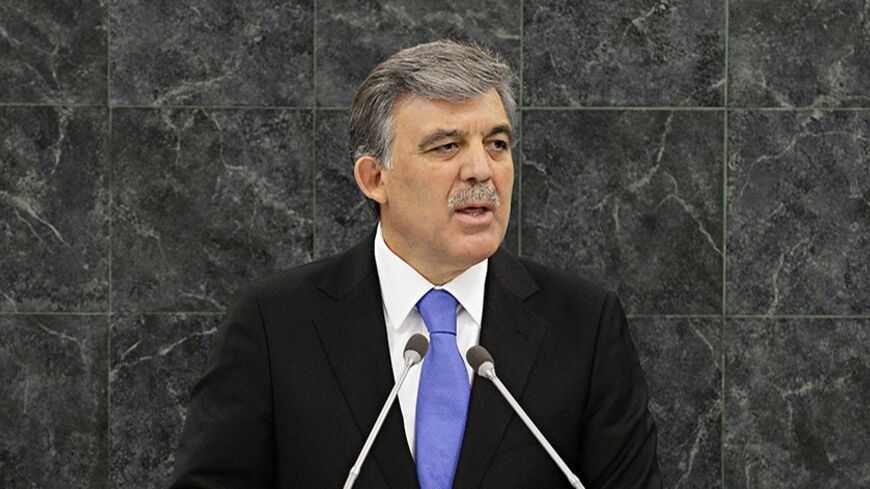 As the critical local elections in Turkey near, planned for the end of March, the rumor mill concerning the presidential elections — which are next in line this year after the local elections — has started gathering speed. As far as the public is concerned, there currently appear to be two viable candidates for president, namely Prime Minister Recep Tayyip Erdogan and the incumbent Abdullah Gul.

Erdogan clearly wants the job, but remains circumspect when asked about his candidacy. Members of his Justice and Development Party (AKP) however spell it out unequivocally. Huseyin Celik, the AKP’s deputy head and the party’s spokesman, for example, went on record once again recently saying categorically, “Our Prime Minister Recep Tayyip Erdogan is the No. 1 candidate for president.”

Meanwhile, the AKP has also been pushing to introduce constitutional changes that would transform Turkey from a parliamentary to a presidential system. The AKP, however, is not interested in a US-style system with its checks and balances.

It wants an unencumbered system that would in effect give the president absolute power.

Erdogan’s rivals claim that what he is after is similar to what ousted President Mohammed Morsi and the Muslim Brotherhood tried to do in Egypt but failed. AKP ideologues argue in turn that the kind of system they are seeking is one where a popularly elected president has a free hand to serve the people better, without getting entangled in the politicking that characterizes a parliamentary system.

Not everyone is buying this argument, however. and the AKP has run into difficulties even among its own members who are not all convinced that there is the need to alter the present system. Gul is also known to be opposed to a presidential system.

“[A presidential system] might have been appropriate instead of a parliamentary one if Turkey was just moving toward democracy. But a presidential system is something that is completely different,” Gul told reporters in March, during a visit to Indonesia. He went on to suggest that instead of being tampered with the existing system should be improved.

The dilemma for Erdogan is that he has no choice but to aim for the presidency, since the AKP’s charter does not allow him to become prime minister again. He can change the charter, of course, and become prime minister again if the AKP wins the general elections planned for 2015. That, however, would lose him credibility, because the principle behind the idea was that a person should serve as prime minister for a limited period before letting others have their turn.

Unlike Erdogan, Gul has a choice in this regard. He can either run for the presidency again or he can assume the leadership of the AKP after he leaves the presidency and become prime minister, should AKP win the elections. The big question, however, is whether Gul is prepared to play second fiddle to Erdogan, in a Putin-Medvedev-type arrangement, especially when they clearly have opposing views on key issues.

During a working breakfast given by Merrill Lynch in New York on Sept. 24, Gul said that while he opposed the violence during the protests, he was “proud” of the young Gezi Park protesters because they revealed a Turkish youth that was concerned with the same issues as youth in advanced countries.

Erdogan, however, sees this youth as an existential threat and has accused “international forces and their domestic lackeys” of trying to topple him by using these protests. Faced with a massive corruption scandal that has also implicated his government he is using the same argument today.

Gul is also opposed to the changes the government proposes to make to the law governing the independent Supreme Board of Judges and Prosecutors (HSYK) to bring it under government control. The government has temporarily shelved its bill on this topic, which clearly violates the separation of powers because of opposition from the EU. Gul’s position on the topic is also said to have been influential in this regard.

Gul wants the changes to this law to be constitutional and to respect EU standards and underscored this point again in mid-January. Gul's requests in fact defeat the government’s purpose.

Most domestic and foreign analysts are convinced that the government’s ultimate aim is to introduce legal changes that protect Erdogan and the AKP against future corruption charges like the ones they are faced with today. Otherwise, it is argued, why change the existing HSYK law that conforms to EU standards? At any rate, and regardless of Gul’s remarks, the government appears determined to rewrite the HSYK as it sees fit.

Gul has also expressed very democratic views on the freedom of expression and attempts to restrict the Internet. Eyes are on him now, after the new and highly restrictive Internet law that was passed in parliament this week with AKP votes.

The draconian law has already elicited strong reactions from media watchdog groups as well as the Unites States, the EU and the Council of Europe. The International Press Institute (IPI) reminded Gul of a Twitter message he posted May 28, 2011, in which he said, “My view is that there should basically be no restrictions on any freedoms. Anyone who wants should be able to roam the Internet freely.”

Like many voices in Turkey, the IPI is calling on Gul to use his prerogative and veto the new Internet law. Not everyone is convinced, however, that he will. Gul is in fact being increasingly accused of passivity in the face of the government’s blatantly undemocratic actions.

His critics argue that rather than uttering normative remarks that sound good but have no teeth, he should be indicating unequivocally that any step by the government that smacks of unconstitutionality will not pass by him. His critics add that despite his liberal and lofty democratic remarks, Gul has rubber-stamped almost every law drafted by the AKP and sent to him for ratification.

Pointing out in his column on Feb. 4 that Gul had endorsed just about everything sent to him by the government to date, Ozdemir called on him to “at least stand firm for once, after all these years,” and to veto the new Internet law as one of his last acts before leaving the presidency.

Gul insists defensively, in the face of criticism alleging passivity on his part, that he is doing everything in his power with regard to these issues, and points to his statements and contacts in this regard. But he, too, is faced with a dilemma.

He is expected to oppose Erdogan on these issues, and even run against him in the next presidential elections. But Gul hails from the AKP of which he is a co-founder, and appears reluctant to undermine his former “fellow traveler.”

His dilemma, however, is compounded in that if Erdogan were elected president and used the current powers of the presidency much more effectively than Gul, then Gul’s alleged passivity as president would have been confirmed.

If, on the other hand, Gul became prime minister and Erdogan insisted on being an assertive president, overriding the government as he saw fit — the way the late President Turgut Ozal did in the 1990s — then the political persona Gul has built for himself as a principled and determined liberal democrat would be seen to have been no more than a bubble.

The basic question therefore is whether Gul will ultimately defer and let Erdogan take the lead politically in the coming years, or become a strong democratic leader who can lead Turkey out of the economic and political morass it is sliding into.

Time is running out for Gul and he will have to decide soon how he wants to act, given that presidential elections are planned for this August. Some in Ankara are even arguing, albeit somewhat prematurely, that he has already lost his chance of becoming a future leader of Turkey.