Turkey’s President Abdullah Gul responds to the backlash over his support for a controversial Internet law in Turkey. 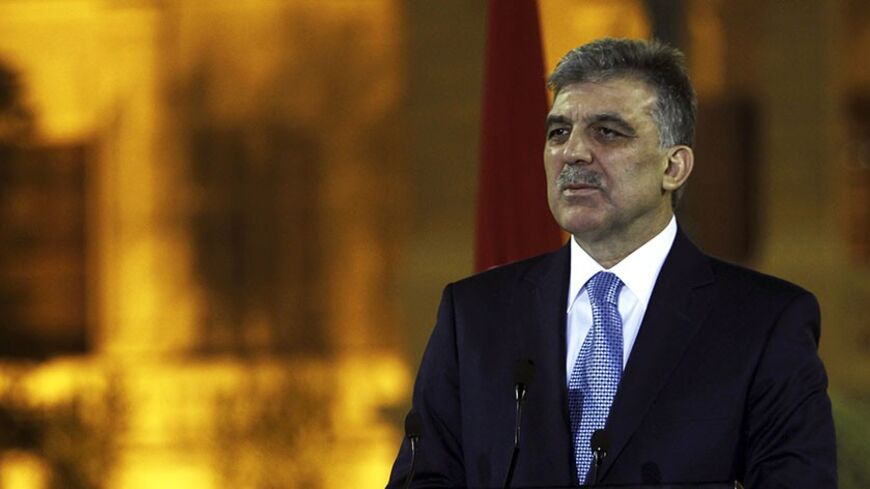 President Abdullah Gul, who hails from the same Islamist roots as Prime Minister Recep Tayyip Erdogan, has been cultivating an image for himself as a religiously devout, yet politically liberal and Western-oriented politician keen on European democratic and legal standards for Turkey.

Erdogan, with whom he cofounded and carried the ruling Justice and Development Party (AKP) to victory, however, has landed him in a position where his politically positive political persona took a nose-dive, leaving him on the defensive.

Gul was faced with biting criticism at home and abroad after he endorsed an Internet law that would enable the head of the Directorate of Telecommunications (TIB), who is a government appointee, to more or less instantly restrict access to any Web content deemed damaging to the government.

Gul was left in an equally difficult position after the government passed a new law on the Supreme Board of Judges and Prosecutors (HSYK) that would bring the legislature under its control in violation of the principle of the separation of powers. That law is in front of Gul, awaiting endorsement.

As with the Internet law, the government moved to introduce this legislation after the corruption scandal that broke out on Dec. 17 implicating members of the government, as well as Erdogan’s own son Bilal. Again, like the new Internet law, this law is being taken by many as an attempt to cover up this scandal and protect the government against similar scandals in the future.

Another change the government accepted at Gul’s request would impose restrictions on how the TIB keeps track of the Internet traffic of individuals. These changes have been accepted as positive developments by some liberal observers. Media watchdog groups, however, question why an Internet ban should not be based on a court order in the first place.

They also point to the manner in which the government is trying to bring the legislature under its control, and question whether the requirement of any court order in this context will ultimately have any meaning.

Erdogan and his ministers argue that their aim in preparing this law is to protect individuals against invasions of their privacy. The government moved to introduce the new law after damning tape recordings linking Erdogan's son Bilal, as well as members of his cabinet, to corruption cases were leaked over the Internet.

Tapes, photographs and secret documents leaked to the media to undermine opposition politicians are not new to Turkey, of course, and therefore many doubt the sincerity of the government’s newfound concern over the invasion of privacy.

Although Gul must have expected some reaction after his decision to endorse the new Internet law, it is nevertheless clear that he was taken seriously aback by the intensity of the criticism he ended up receiving.

“President Abdullah Gul, Turkey’s head of state, has now joined Prime Minister Recep Tayyip Erdogan in the government’s assault on free speech,” The New York Times said in its editorial on Feb. 21, adding: “The law is just the latest blow to Turkey’s democracy.”

Deeply disturbed by such commentary, Gul went on the defensive over the weekend and invited well-known columnists and journalists for a frank discussion on the matter. He indicated during the meeting, held in Istanbul, that such criticism was unfair, given that he had forced the government to change the Internet law.

Ironically, since he had just endorsed a law that remains restrictive despite the changes he requested, Gul not only lauded the freedoms that have come with the Internet but also underlined the difficulty for governments in trying to control the Internet because of the technology available to users.

“It is the Internet that has made the world transparent and has razed all borders. There are countries that are trying to bring daily restrictions. But programs have been developed to overcome bans on the Internet. The proxy programs developed by Google are aimed at these countries,” Gul said.

Recalling how Deniz Baykal, the former leader of the main opposition Republican People's Party (CHP), was toppled after a video revealing a sexual encounter of his with a female CHP deputy was disseminated just prior to the general elections in 2011, Gul suggested there was a need to take precautions against such things.

He was, of course, reminded that the same AKP government that is seemingly trying to protect individuals against such invasions of privacy today did not refrain from using the video against the CHP at the time. Gul said he had spoken out against the use of that video then.

Gul also said the Internet legislation was included in a package of laws adopted jointly, and indicated that if he had vetoed the Internet law, all the other laws that were avidly awaited by many would have been affected adversely.

He also said that if he had vetoed the Internet law, the government would have sent it right back to him without any changes, which it can do under the constitution. He gave no indication, however, as to why he did not use his right to send the new Internet law to the Constitutional Court after endorsing it, especially after many legal experts have said it violates not just the constitution but also European Union standards that Turkey has to respect as a candidate for membership.

Gul also chose not to answer a question about whether he would have vetoed the Internet law if it had come to him on its own, rather than being bunched in with other legislation.

Asked how he felt about the scathing New York Times editorial, Gul said he considered this to be excessive and unfair. “A piece by the editorial board of an important newspaper is important. I take note of such a piece and value it. However, I would also like to say that it was unfair toward me,” he said.

As an aside here it must be underlined that these remarks highlight an essential difference between him and Erdogan, who has a well-established record of responding angrily to such editorials, not refraining from accusing them of being part of a Jewish-led international plot to discredit and topple him and his government.

Also asked if he was disturbed, as an avid Twitter user, that tens of thousands of his followers had decided to drop him after he endorsed the new Internet law, Gul said he was not chasing after popularity.

Gul was also asked about the equally controversial HSYK law that has been sent to him for endorsement. He said he had established no less than 15 points in the initial bill that fell contrary to the constitution and added that he had called the justice minister to point this out.

“Some changes were made and (the law) was sent to us two or three days ago. My friends are studying it and making preparations for me. I haven’t looked at them yet. I cannot say anything before seeing these preparations,” Gul said.

Gul’s dilemma is that if the law sent to him is unacceptable under European standards — as it initially was — then this makes new legislation necessary. Unless, that is, it further enhances the separation of powers principle and advances democracy in Turkey. But this is clearly not the case, since a new law that does this would defeat the government’s purpose of bringing the legislature under its control.

It remains to be seen whether Gul will damage his reputation even more by endorsing this equally controversial law, or manages to regain some of the prestige he lost over the new Internet law, even if this drives a wedge between him and Erdogan.