Developments contradict claims by Prime Minister Ahmet Davutoglu that Turkey will become a global power in terms of universal democracy over the next nine years. 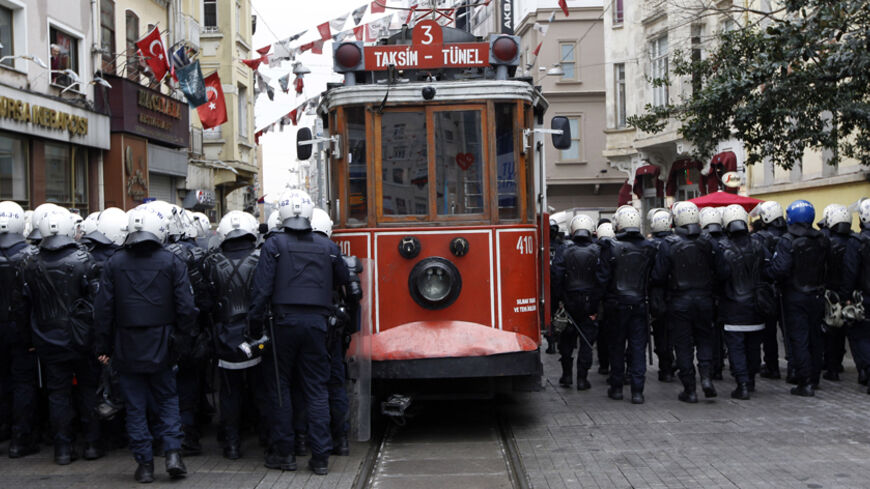 Prime Minister Ahmet Davutoglu is known for making grandiose statements that eventually turn around and haunt him. His “zero problems with neighbors” slogan, which he coined as foreign minister, is a case in point. The slogan was used against him as Turkey’s ties with its neighbors got progressively worse due to serious policy mistakes by his government.

But this has not deterred Davutoglu from making what many consider blatantly exaggerated remarks. Meeting with the editors-in-chief of major Turkish dailies on Sept. 14 in Istanbul, Davutoglu displayed his beliefs once again.

Referring to his Justice and Development Party’s (AKP) vision for 2023 — the centenary of the founding of the Turkish Republic — he said their target was “to make Turkey a global power in terms of its universal democracy.”

This would be his vision for the next nine years, during which he clearly hopes to remain in power. It is no wonder that many have taken Davutoglu’s remark with a grain of salt, considering the negative picture Turkey currently presents to the world in terms of its democracy.

As Davutoglu met with the editors in the plush surroundings of his office in the Dolmabahce Palace, a nearby demonstration took place on Istanbul's famous Istiklal Street, seeming to summarize the current situation in Turkey.

Members of groups calling themselves “Democracy Inspectors” and “3 H” (based on the initials of the Turkish words for liberty, law and tolerance) marched backward down Istiklal Street to demonstrate how Turkey’s democracy is not progressing, as the AKP government claims, but is visibly regressing.

A striking example of this claim is the new law introduced by the government that turns the screws even tighter on the Internet. The law enables the authorities to not only restrict what individuals access on the web, but also to keep tabs on what is being accessed in ways that can be used as evidence against them if deemed necessary.

“Prime Minister Davutoglu’s new government has adopted even more provisions to restrict free speech online and the privacy of Internet users,” Emma Sinclair-Webb, the senior Turkey researcher at Human Rights Watch, said in a Sept. 15 statement. “These measures would violate basic rights protected in the constitution and guaranteed under international law and should be struck down.”

Following the anti-government Gezi Park protests last summer, then-Prime Minister Recep Tayyip Erdogan (now president) declared Twitter to be a “scourge,” adding that the “biggest lies can be found there.” He also declared social media to be “the worst menace to society.”

The new Internet law shows that Davutoglu will be taking his cues from Erdogan​, not “universal democracy.” The main opposition Republican People's Party (CHP) appealed the law to the Constitutional Court, which has annulled previous Internet restrictions introduced by the AKP government.

The fact that the matter is now in the hands of the highest court, however, highlights another area where Turkey is moving away from democracy, namely, the judiciary. The Constitutional Court remains the only independent court in Turkey that has not been co-opted by the AKP government. Otherwise, the separation of powers principle, which lies at the heart of any genuine democracy, has been seriously compromised.

The government is now pushing hard to bring the judiciary under further control, having made significant strides already in this regard since the December corruption probes launched by prosecutors that implicated Cabinet ministers and Erdogan's son Bilal.

Erdogan and the AKP have survived these charges so far by claiming these probes were initiated by a “parallel structure” lodged within the judiciary by members of the group attached to Fethullah Gulen, the Pennsylvania-based Islamic preacher. The allegation is that the Islamist Gulen group — a close AKP ally in the past — is out to topple the government by underhanded means.

Hundreds of policemen, prosecutors and judges have been sacked over the past eight months on the grounds that the judiciary and law enforcement are being cleansed of this illegal parallel structure. Nationwide elections to be held on Oct. 12, when thousands of judges and prosecutors across the country will elect members of the Supreme Board of Judges and Prosecutors (HSYK), are also crucial for the government, which aims to fully control the judiciary.

The HSYK has the power to fire judges and prosecutors and to initiate investigations in the judiciary. There are three groups running in these elections: a pro-government group, a secularist Kemalist group and a pro-Gulen group. The government has been accused of providing unfair advantages to its own group to ensure its list — running under the title of “Unity in the Judiciary” — wins the majority of HSYK seats.

If the government can co-opt the HSYK fully, the judiciary — except for the Constitutional Court — will effectively be attached to the Ministry of Justice. President Erdogan and key AKP members have made it no secret that their aim is to win the general elections in 2015 in a manner that will enable them to amend the constitution.

He, of course, had no choice but to abide by this ruling.

Another indication of how the judiciary has come largely under executive control, following the appointment of hundreds of pro-government judges and prosecutors, is the case opened against 35 members of the Besiktas soccer team’s fan club, known as the “Carsi Group” (Bazaar Group), which participated in the Gezi Park protests.

As Mustafa Akyol wrote in his Sept. 9 post for Al-Monitor, an Istanbul court has approved an indictment requesting what amounts to life without parole for the 35 fans for allegedly being part of a coup attempt against the government.

Asked about this case during her press briefing on Sept. 9, US State Department deputy spokeswoman Marie Harf said they “support freedom of expression and assembly, including the right to peaceful protest,” adding that they “have looked to Turkey to uphold those fundamental freedoms.”

When asked about the government’s new Internet law, she said, “We’ve regularly raised our concerns about media freedom with Turkish officials, and have continued to urge the Turkish government to ensure open access to all social media. That’s a conversation we will continue having.”

The position of EU officials on democracy developments in Turkey is similar. They point out that Turkey has even started to roll back democratic advances made over these past few years in line with Ankara’s EU membership bid.

Following a Sept. 15 Cabinet meeting, government spokesman Bulent Arinc announced “a three-stage plan” for Turkey’s EU policy, which he said would be put in force immediately and end in 2023. According to Arinc, the aim of the plan is not only to re-energize dormant Turkish-EU ties, but also to show that Ankara has not given up on its aim of becoming an EU member.

Given that EU membership is contingent on fulfilling rules pertaining to advanced democracy, which recent developments show Turkey is moving away from, it is no wonder that EU diplomats in Ankara should have also taken Arinc’s words with a grain of salt.