Judicial independence in Turkey has suffered a severe blow earlier this month as thousands of judges and prosecutors were reassigned overnight. 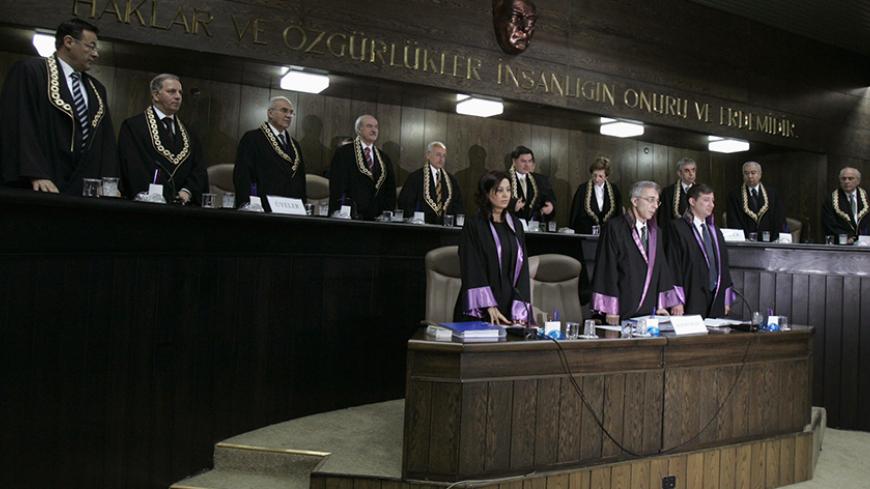 Members of the Constitutional Court attend a hearing in Ankara, May 1, 2007. - REUTERS/Umit Bektas
Sukru Kucuksahin
June 14, 2016

Turkey’s government has long been under fire for reorganizing the judiciary to bring it under its firm control. In what is seen as a major milestone to that effect, the Supreme Board of Judges and Prosecutors (HSYK), the body overseeing judicial appointments and disciplinary measures, issued a decree June 5 reassigning some 3,750 judges and prosecutors across the country. The massive reshuffle suggests that the notion of a judiciary “working in harmony with the executive,” promoted by the HSYK deputy head, Mehmet Yilmaz, is being duly put into action. The decree contains a number of reassignments whereby judges and prosecutors whose rulings have pleased the government were promoted, while those who irked it were downgraded.

The judiciary has long been the subject of major shuffles by the Justice and Development Party (AKP), the most significant of which was a constitutional amendment approved in a September 2010 referendum. The amendment, presented as a major reform strengthening democracy and the rule of law, modified the composition of the HSYK and the Constitutional Court and the way their members are elected. Then-Prime Minister Recep Tayyip Erdogan and government spokesmen claimed the judiciary had finally become independent and impartial. Ensuing elections to the HSYK were greeted with similar messaging. The narrative abruptly changed, however, in December 2013, when a large-scale corruption investigation implicating ministers, crony businessmen and members of Erdogan’s family rattled Ankara.

The AKP claimed the investigation was an attempted coup led by police and judicial officials loyal to its hitherto ally, the Gulen movement, and embarked on a massive purge in the security sector and judiciary. From the government's position, the HSYK was no longer independent and impartial and had to be reshaped immediately. In early 2014, it passed legislation that paved the way for fresh board elections, which were won by candidates backed by the Justice Ministry. It was during this election process that Yilmaz, one of the pro-government candidates at the time, made the memorable statement about the HSYK “working in harmony with the executive.”

One of the first acts of the new HSYK was to create the so-called criminal judgeships of peace, which amount to a closed circuit of courts dealing with arrest warrants during investigations and appeals against warrants issued. In other words, the recourse of appeal to a higher court was blocked. The arrangement, which sparked much controversy, was to be dwarfed by developments that followed.

Erdogan routinely blasted judges who made rulings not to his liking and publicly defied courts that blocked government measures or projects. Following his election as president in August 2014, he flouted constitutional provisions that require the head of state to be an impartial and largely ceremonial figure. Acting as a de facto executive president, he has declared Turkey’s parliamentary system shelved. The trampling of the constitution has become so blatant that senior AKP lawmaker Galip Ensarioglu did not hesitate to declare on television, “The executive, the legislature and the judiciary are all ours.” Most recently, Prime Minister Binali Yildirim said that "no matter what the constitution says," Erdogan is the president with “de facto political responsibilities.”

In a striking illustration of how the judiciary was transformed, members of top courts — including the Appeals Court, the Council of State, the Court of Accounts and the Military Appeals Court — have joined Erdogan on trips across Turkey and applauded his tirades against the opposition.

It was against this backdrop that the HSYK replaced thousands of judges and prosecutors. The objective of its decree was unmistakable. For instance, a judge who had petitioned the Constitutional Court to cancel a legal provision under which hundreds of people were charged with “insulting” Erdogan was “exiled” from a major city to a small province, while another who had eagerly brought such charges was promoted to deputy chief prosecutor in Ankara. Similarly, a judge who had blocked the construction of a cluster of summer houses, allegedly for the Erdogan family, in a protected seafront area was downgraded, while judges and prosecutors who were instrumental in furthering judicial onslaughts on colleagues and police officers involved in the 2013 corruption probes or the attempt to investigate Turkish arms shipments to Syria were promoted to prominent positions.

In remarks to Al-Monitor, Mustafa Karadag, head of the Prosecutors’ Syndicate, lamented that this state of affairs flouts the key principles for which the judiciary stands, including the Bangalore Principles of Judicial Conduct. Commenting on senior colleagues accompanying Erdogan on trips, he flatly dismissed their argument that they had only responded to invitations.

“The judiciary’s independence and impartiality is not vis-a-vis the people but the government and the political establishment. Heads of court who go on trips with a president who has sued so many of his citizens are only eroding the credibility of the judiciary,” Karadag said.

“Judges are supposed to shield themselves from the government. There is even a criminal offence of attempting to influence a court. This offense cannot be committed by ordinary citizens and journalists, but by people who hold power. So, the judiciary’s impartiality is supposed to be vis-a-vis those who hold power,” Karadag emphasized.

The Kurdish-dominated Peoples’ Democratic Party (HDP), for its part, believes the reshuffle is linked to the government’s onslaught on the party that last month culminated in a constitutional amendment that revoked judicial immunity for parliamentarians, a move designed to prosecute HDP lawmakers and eventually oust them from the legislature.

“The president and the AKP are carrying out a very planned, very organized process,” Idris Baluken, HDP parliamentary whip, told Al-Monitor. According to him, judicial officials were reshuffled in a surgical operation that aims to ensure that only HDP lawmakers are put on trial. “This includes even the [names of] lawmakers who will be arrested. They discussed this extensively and put [the plan] into action with the decree,” said Baluken.

Even the date on which the president approved the amendment was meant to send a message to the HDP, according to Baluken. Erdogan signed the bill into law late on June 7, shortly before the 15-day signing deadline was to expire. A year to date, the HDP had emerged triumphant from the general elections, dealing a serious blow to Erdogan’s hopes for an AKP-dominated parliament that would give him the executive presidency he wants.

“After the June 7 elections, he had said we would be brought to account,” Baluken said. “And he signed the law on the anniversary of June 7, in the hours when the elections results became known."