Turkish Prime Minister Recep Tayyip Erdogan's approach to the presidential system concentrates power in the hands of one person, eliminating the checks and balances necessary for institutions to pursue their duties, writes Kadri Gursel. 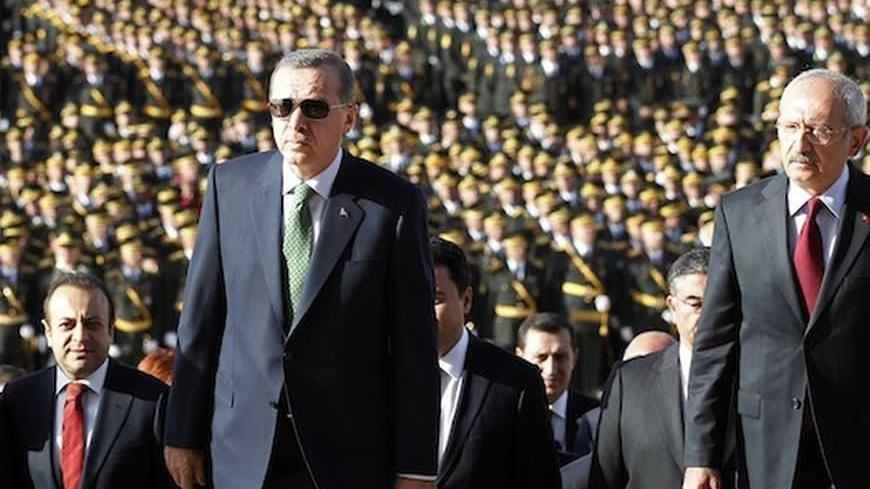 There has been a long-standing consensus among Turkey’s political parties, civic society and opinion leaders on eliminating the country’s authoritarian constitution — the legacy of a putschist military — and replacing it with a civilian, libertarian version.

The current constitution was drawn up under the tutelage of generals who toppled the civilian government in the 1980 military coup, and it was endorsed in a 1982 referendum by 92 percent of voters. Despite nearly 30 amendments since then, it has preserved its authoritarian spirit.

On Oct. 19, 2011, the four parties in Turkey’s parliament set up the Constitution Conciliation Commission as part of an agreement to scrap the existing ragbag constitution and to draft a new one that meets contemporary norms.

Commission progress was initially slow. The ruling Justice and Development Party (AKP), the main opposition Republican People’s Party (CHP), and the other two opposition forces — the Nationalist Action Party (MHP) and the pro-Kurdish Peace and Democracy Party (BDP) — are all represented equally.

When the commission began to discuss core issues that would determine whether the new system would be a democracy, such as the constitutional setup of executive, legislative and judiciary powers, it became clear why the AKP felt the urge for a new constitution.

In November, the AKP submitted a proposal outlining an authoritarian presidential system that subjugates the legislature to the executive power. With this proposal, the ruling party effectively destroyed the ground for any constitutional compromise with the CHP and the MHP.

It has long been known that Prime Minister Recep Tayyip Erdogan aspires to abolish Turkey’s parliamentarian regime, shift to a presidential system and become its first president. Let's look at what this proposal — drafted based on Erdogan’s wishes — would do.

The proposed constitution stipulates that elections for the single-chamber legislative assembly and the president, who holds the executive power, will be held on the same day. The clause is designed to ensure that the political tendency of the voters shapes simultaneously both parliament and the presidency, and that both elections eventually produce the same political outcome. As a result, the room for checks and balances between the legislative and executive powers is restricted from the very start.

Erdogan maintains that the president should be a partisan, not an independent figure. If this materializes and if Turkey’s political party system fails to democratize –- there is no sign it will –- then his election as president would mean that he selects those who enter parliament, just as he does now as prime minister.

Under the AKP proposal, the president is entitled to extraordinary powers — including dissolving parliament, calling parliamentary and presidential elections, and governing the country through presidential decrees that evade legislative processes.

Under the proposal, the president holds such extensive powers over parliament that the presidency is capable of blocking virtually any legislation. If the president is unhappy with a given bill and returns it to parliament, the legislature can pass the bill unchanged and send it back for ratification only with a three-fifths majority. A simple majority is enough for the procedure under the current constitution.

On Feb. 5, the AKP submitted a further proposal for the judicial section of the new constitution, demonstrating that Erdogan also aspires to eliminate the separation of powers — an indispensable principle of democracy.

In Turkey, the authority to recruit, appoint, transfer and sack administrative and judicial judges and prosecutors rests with the 22-member Higher Board of Judges and Prosecutors (HSYK).

The AKP proposal falls short of even the controversial overhaul that the HSYK underwent, under party-designed constitutional amendments approved in a 2010 referendum.

Under the current system, four board members are appointed directly by the president, while 16 are elected by members of the judiciary. The justice minister chairs the HSYK, and, along with his undersecretary, is a permanent member of the body — a design which is already a fundamental violation of judicial independence.

The AKP proposal preserves the status of the pair, but it reduces the number of HSYK members elected by judges and prosecutors from 16 to six. Under the plan, seven members would be elected by parliament, while the president would directly appoint another seven. The proposal means that a total of 14 board members would be determined by the political authority, as parliament's picks are by simple majority — in other words, the governing majority.

As a result, the political authority takes full control of the HSYK, a strategic body that shapes the judiciary. This would entirely eradicate judicial independence.

The Constitutional Court, which is supposed to keep the government under constitutional supervision, would face a similar fate under AKP proposals.

Under the existing system, three of the 17 court members are elected by parliament from among several candidates. The president names the remaining 14 members — four of them by his own choice, and 10 from among candidates nominated by the higher judicial organs.

Under the AKP proposal, parliament elects nine of the Constitutional Court members, and the president picks directly another eight. The higher judicial organs make no nominations.

If members of the Constitutional Court were determined directly by the political authority, it would become almost impossible for this body to exert any supervision over the executive power and the quasi legislature.

In sum, Erdogan’s a-la-carte presidential system would eradicate the separation of powers and concentrate all power in the hands of a single person. It makes it impossible for institutions to fulfill their duties of checks and balances.

If this proposal becomes Turkey’s new constitution, Turkey will no longer be a democracy. It's a proposal for an authoritarian regime with an “elected sultan” ruling Turkey.

To make it happen, the AKP has to bargain and hammer out a deal with the Kurdish party, and then ensure that more than 50 percent of the people vote “yes” for the new constitution at a referendum, scheduled to be held no later than the last quarter of 2013.