Ouster of Kurdish MPs threatens to fuel separatism in Turkey

Turkish parliament members have stripped themselves of immunity in a move designed to expel Kurdish lawmakers, but pushing the Kurdish struggle out of the political arena may end up fueling violent opposition instead. 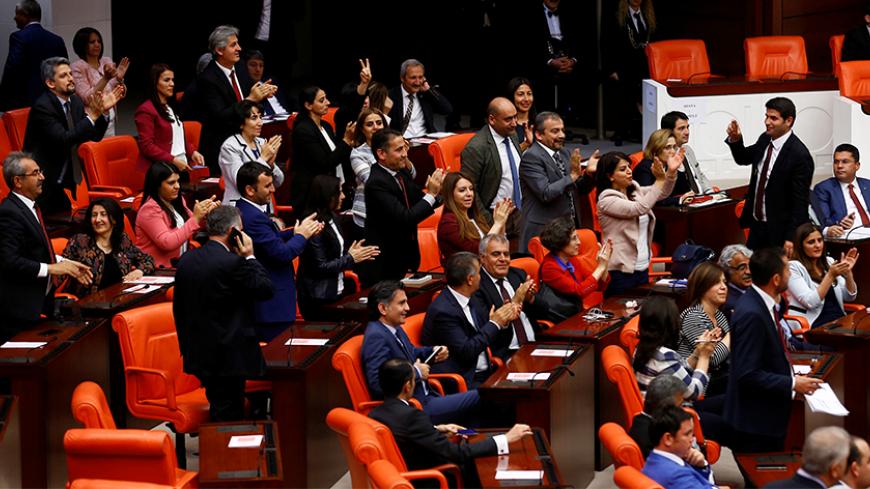 Turkey’s parliament passed a constitutional amendment May 20 that revokes the immunity of current lawmakers in a move designed to prosecute members of the Kurdish Peoples’ Democratic Party (HDP) and oust them from parliament. The ruling Justice and Development Party (AKP) and the far-right Nationalist Movement Party (MHP) voted in favor of the amendment, backed by a number of deputies from the main opposition, center-right Republican People’s Party (CHP).

Under the bill, parliament members under criminal investigation will see their files sent directly to the judiciary. The amendment affects 148 lawmakers who are the subject of 667 cases that prosecutors have already reported to the parliament speaker’s office, related commissions and the Justice Ministry. The bulk of those probes target HDP deputies. Of the 59 HDP lawmakers, 53 face charges in 405 cases, including 206 related to terror offenses, the overwhelming majority of which stem from their expression of “objectionable” views.

While the amendment does not distinguish between parties, its spirit directly targets the HDP. Without mentioning the party, the preamble of the draft bill, submitted April 12 with the signatures of all AKP deputies, accused HDP lawmakers of “providing physical, spiritual and moral support to terrorism.” The Turkish public, it said, “believes those deputies abuse their constitutional immunities and wants parliament to allow the trial of those who have committed such acts.”

The move brings to mind the political turmoil of 1994, when the parliament lifted the immunity of eight Kurdish deputies on grounds they belonged to the outlawed Kurdistan Workers Party (PKK) and pursued a separatist agenda. The deputies were bundled into police cars outside parliament and whisked away to jail. Since no one in Turkey would argue today that the ouster of the Kurdish deputies contributed to security and stability 22 years ago, what could possibly explain the current push for its repetition on an even larger scale?

“Erdogan” is the key word in any explanation. The lifting of the HDP lawmakers’ immunity is President Recep Tayyip Erdogan’s political project. In a Jan. 6 speech, three months before the draft bill’s submission to parliament, he had sent an unequivocal message to the AKP, saying, “It’s imperative for parliament and the judiciary to take action against lawmakers who behave like members of a terrorist organization.”

The war Erdogan declared on the PKK in July has made the far-right MHP an ally of the AKP, and the two parties have come to join forces on almost anything related to the fight against the PKK. The parliamentary onslaught on the HDP was no exception. Yet the two parties’ combined number of seats in the 550-member house was only enough to meet the three-fifths majority required to put the amendment to a referendum. The outright adoption of the bill required a two-thirds majority, which was secured and exceeded with the support of about 20 CHP members, who brought the votes in favor to 376.

The CHP, which was known for being against lifting the HDP members’ immunity, maintained an ambiguous stance throughout the process, unable to overcome fears of being perceived or portrayed as a supporter of the “PKK’s extension in parliament.” Presenting various justifications, the party had announced it would support the bill. Yet, only as many CHP deputies did so in the final round of voting as was needed to clinch the two-thirds majority. The overwhelming majority of the 133 CHP deputies voted against the bill.

The CHP secured the lifting of immunities without a referendum, thus sparing itself a campaign in which it would have had to persuade voters it was not working hand in hand with the HDP. Yet 51 CHP members are among those affected by the bill. If some of them share the HDP deputies’ fate and find themselves in court, the party will find itself in an ironic situation.

After the amendment is signed into law by Erdogan, all files will be sent to the judiciary within 15 days and the legal proceedings will begin. Those convicted will lose their parliamentary seats. The constitution stipulates a by-election within three months if the number of vacant seats reaches 28. Though the trial of HDP members and their eventual loss of seats will take time, Erdogan will keep the by-election prospect as a backup formula in his plans to strengthen the AKP’s majority in parliament and write a new constitution installing the authoritarian presidency he seeks.

The whole amendment is designed to serve Erdogan’s drive for an executive presidency. As HDP lawmakers stand trial for supporting terrorism, the HDP itself will be criminalized. This, in turn, will aggravate the party’s legitimacy problem and facilitate the Interior Ministry’s removal of elected HDP mayors from office. Similarly, obstructing HDP electioneering in the next polls will become easier. All this is aimed at pushing the party under the 10% threshold to enter parliament, which will allow the AKP to grab the seats the HDP normally would have taken. The ultimate objective is to ensure the AKP clinches a stronger parliamentary majority in a potential early election.

The lifting of immunity also serves to unite the nationalist, conservative Sunni front taking shape between the AKP and the MHP, on both the leadership and the grass-roots levels. Yet, the two parties’ rivalry in HDP-bashing continues, with the AKP clearly having the edge. The ruling party is the one that really bashes the HDP, while the MHP’s position boils down to calling for more criticism. The more the AKP criticizes the HDP, the more voters it hopes to lure from the MHP and push the struggling nationalist party under the threshold as well.

The onslaught on the HDP may promise gains for Erdogan, but it is a double-edged sword. On the other side of the coin, it means a democracy crisis for Turkey and a heavy price for the Kurdish question.

The impending damage report could be summarized as follows: Lifting the HDP lawmakers’ immunity will amount to shutting the Kurdish movement out of legal parliamentary politics. This, in turn, is likely to enlarge the popular base for Kurdish separatist currents. Even worse, the embargo on legal politics will strengthen the hand of proponents of armed action, which will mean more Kurdish young people taking up arms. While delegitimizing the HDP, the Erdogan regime itself will lose legitimacy in the eyes of the Kurdish movement’s popular base. As a result, the Kurds’ emotional estrangement from Turkey will accelerate at a dramatic pace.

Naturally, there is also an international dimension to the issue. Pushing Kurdish politics into the illegal realm will further damage the international standing of the Erdogan regime, already badly bruised due to its authoritarian tilt. And as parliament members go on trial for opinions they have expressed, more people will question how much freedom of thought remains in Turkey.