Erdogan counts on divisive campaign ahead of key vote

The pro-constitutional amendment campaign ahead of Turkey’s critical April referendum is exposing the true spirit of the presidential regime that Erdogan wants to install. 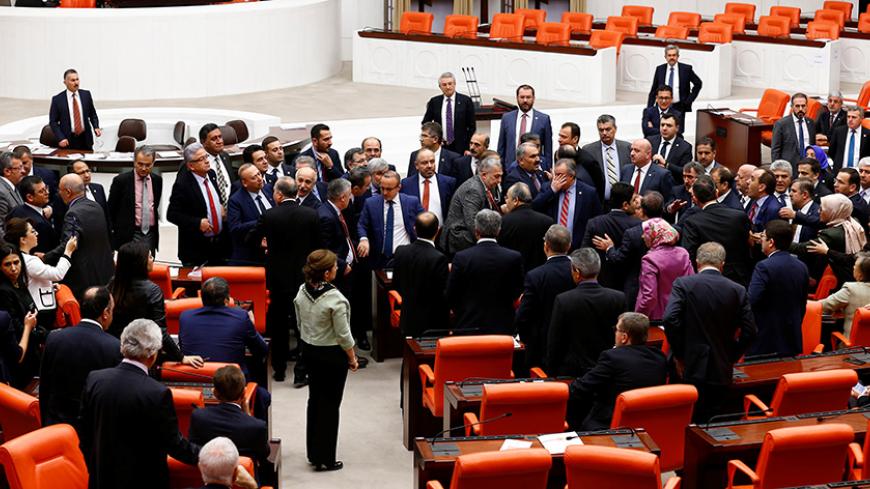 Lawmakers from the ruling Justice and Development Party and the main opposition Republican People's Party scuffle during a debate on the proposed constitutional changes at the Turkish parliament in Ankara, Jan. 12, 2017. - REUTERS/Umit Bektas

Nine parties are currently eligible to run in Turkey's elections. Four of them — the ruling Justice and Development Party (AKP), the main opposition Republican People’s Party (CHP), the pro-Kurdish Peoples’ Democratic Party (HDP) and the Nationalist Movement Party (MHP) — are represented in parliament. The others include the nationalist Great Union Party, the neo-nationalist Kemalist Patriotic Party (VP) and three Islamist outfits — the Felicity Party (SP), the Independent Turkey Party and the Kurdish-dominated Free Cause Party (Huda-Par).

From the nine parties’ positions on the April 16 referendum, the battle lines are emerging ahead of the critical vote. The plebiscite will determine whether the constitution will be changed to replace Turkey’s parliamentary system with an executive presidency designed to grant sweeping powers to President Recep Tayyip Erdogan. The yes camp, led by the AKP and the MHP, has been joined by Huda-Par. The naysayers, meanwhile, have emerged as a rather heterogeneous group. The CHP, HDP, VP and SP, which have all announced they will campaign against the changes, represent a motley crew of social democratic, neonationalist, Kurdish and Islamist forces.

The narrative of the yes camp rests on the notion that Turkey should have a stronger leadership and mobilize against myriad external threats to preserve its stability and grow stronger. The no camp emphasizes two themes. The CHP and the HDP say the constitutional changes will install a one-man regime and plunge Turkey into autocracy, while the SP and the VP highlight the danger that the regime shift will lead to further polarization and weaken the country.

Opinion polls suggest the race is tight and neither side has managed to take a convincing lead. An important segment of AKP voters remains undecided, while the MHP base is bitterly divided amid a deepening rift between the party leadership and a group of dissident heavyweights.

The AKP is planning a pompous campaign launch in Ankara on Feb. 25. The ruling party and the MHP will organize both separate and joint rallies backed by Erdogan, who is expected to hold rallies in 30 major cities in yet another breach of his constitutional impartiality.

Can Erdogan, a skillful orator, sway public sentiment in his favor? It is hard to predict, but an overview of the parties’ strategies provides some clues and also illustrates the moods and contrasts of Turkey’s political elite.

The CHP has made democracy, freedom and peace the key words of its campaign, arguing that a yes vote will jeopardize those values. The party won't hold big rallies but smaller direct meetings with voters and make intensive use of social media. For Turkey’s political traditions, this approach is rather unconventional. The country remains under a state of emergency, which limits the free flow of information and communication, further throwing this strategy's efficacy into question, especially where it comes to winning over undecided voters.

The HDP, for its part, is under an unprecedented clampdown. A fifth of the party’s parliament members, including both co-chairs, are in jail on terror-related charges. A sweeping wave of arrests has largely paralyzed party branches and members who remain free are under constant threat of detention.

Senior HDP lawmaker Idris Baluken fears the clampdown could intensify as the referendum draws closer. “The state of emergency has turned into de facto martial law in the predominantly Kurdish provinces. We will probably face even harsher practices in the run-up to the referendum,” he told the Medyascope news site last week.

He added, however, that the party has “a well-organized base” that is eager to express itself at the referendum after devastating military operations in the mainly Kurdish southeast and amid the ongoing onslaught on the party. The HDP, Baluken stressed, rejects both the traditional rigid approach to the Kurdish issue and “the new authoritarian and dictatorial tendency that the AKP represents.”

The HDP will likely focus on face-to-face interaction with its voters, such as small gatherings in city neighborhoods and villages, to make sure its base goes to the polls en masse.

The naysayers also include MHP dissidents who have been sidelined from the party, among them popular politicians such as Koray Aydin, Sinan Ogan, Meral Aksener and Umit Ozdag. They have launched a joint initiative called "The No Platform” and are planning to tour the Anatolian heartland in what is expected to be an influential campaign.

In the yes camp, the rhetoric of both the AKP and the MHP rests on strong nationalism, hostility to Kurds and hostility to traditional politics.

In his referendum directive to party branches, MHP leader Devlet Bahceli justifies support for the amendments by invoking a Kurdish threat to Turkey’s unity, referring to the Kurdistan Workers Party (PKK) in Turkey as well as the Syrian Kurds’ Democratic Union Party (PYD) and its armed wing, the People’s Protection Units (YPG). “Turkey is facing a dire period full with dangers and threats. The imperialist conspiracy, aimed at changing the borders of neighboring regions and redrawing them by force, has mercilessly intensified,” he wrote. “Sadly, our country is besieged. Russia and the Western alliance are patting the PKK-PYD-YPG on the back, seeking to strengthen the camp of our enemies. It is an inevitable and indisputable imperative for Turkey to keep its unity strong and close ranks through national consensus and cohesion.”

The AKP, which got 50% of the vote in the last elections but whose constituents now make up the largest segment of the undecided, has embraced the same theme, but even in a more populist and dangerous way.

This type of rhetoric is spreading, becoming almost normal. Prime Minister Binali Yildirim, too, links no-voters to the PKK as well as US-based preacher Fethullah Gulen, who stands accused of masterminding last year’s putsch and whose supporters are now labeled in many circles as the Fethullah Gulen Terrorist Organization, or FETO. In early February, Yildirim said, “We say yes because the PKK, the HDP and FETO say no. To make up your mind, look at who the naysayers are.”

In sum, the rhetoric promoting support for the referendum rests on the notion of friends and enemies. This attitude of “us versus them” portrays naysayers as adversaries who do not truly belong to the nation and equates dissent with treason. As such, it is essentially against politics itself and outstrips any previous polarizing rhetoric seen in Turkey.

Hence, these pro-referendum campaigns and their language expose the true spirit of the constitutional changes, which promise nothing but a populist autocracy. At the same time, they show that the Turkish right has declared Turkey’s new militarist political paradigm in the Middle East region and its position toward the Kurds, and is now inviting the nation to approve it.