Why did Erdogan sacrifice Kurdish vote? 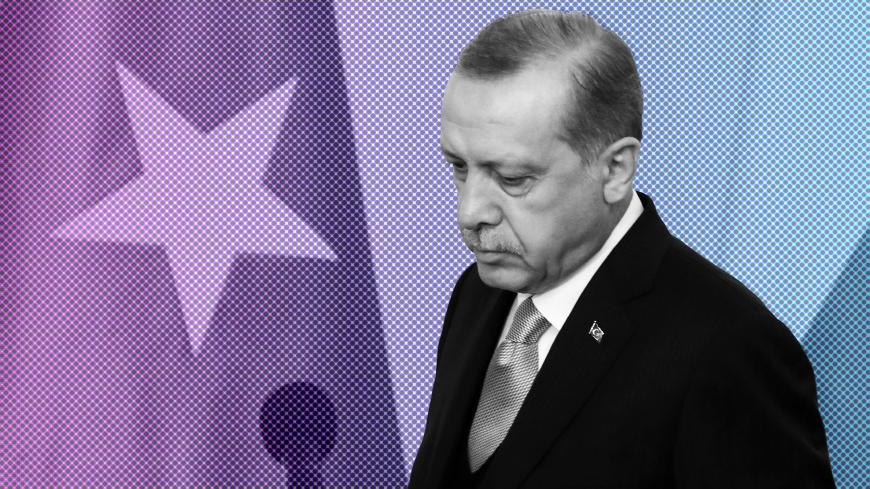 Surviving as a Kurd in Turkey is becoming more difficult. The Iraqi Kurdistan referendum Sept. 25 — although almost undone in a month — has given one more reason to the ultranationalist faction in the Turkish government to rally around Kurdophobia. Two days prior to the referendum, the Turkish parliament authorized the use of military force in Syria and Iraq. All parties voted in favor, except for the pro-Kurdish Peoples’ Democratic Party (HDP), which has seen many of its leaders imprisoned, including a large number of legislators and 4,000 members. On Sept. 23, HDP lawmaker Osman Baydemir summarized the sentiments of the majority of the Kurds, saying the force authorization is “a clear declaration of enmity toward 40 million Kurds” in the region.

Turkish President Recep Tayyip Erdogan and his government have flexed their muscles against Kurdistan Regional Government (KRG) President Massoud Barzani (who said Oct. 29 that he will step down Nov. 1) and haphazardly allied with the most unlikely actors in the region against the Kurds. Almost all Turkish media outlets utilize harsh anti-Kurdish rhetoric, and the Yeni Akit daily went as far as to publish a caricature of Barzani’s head cut off even before the referendum results were published.

Yet Turkey has the largest Kurdish population in the region and will hold municipal, parliamentary and presidential elections in 2019, for which Erdogan will need the Kurdish vote. In 2016, the Kurdish population in Turkey was estimated at 15 million to 20 million people, 19% to 25% of the population. Although the majority of the Kurds are located in the eastern and southeastern provinces, due to political and economic pressures these regions have sent millions of their residents to western Turkey, particularly to Istanbul. After each election and referendum the Kurdish vote becomes the most popular topic of discussion in Turkey. The Turkish media has already started asking why Erdogan is ignoring the Kurdish vote. How did the Kurdish vote lose such value for the upcoming elections?

Following discussions with Kurdish and Turkish lawmakers as well as scholars, four main reasons why the Kurdish vote no longer matters so much for Erdogan can be identified:

Following the April 16 referendum, the Turkish government has been in the process of harmonizing all rules and regulations for a smooth transition to the presidential system. One of the expected changes is the electoral system. Although the municipal elections are to stay the same, there are major changes expected for the parliament, whose legislative powers are to be diminished significantly. While there is no public proposal for changes of the electoral system at the moment, pro-government newspapers have been publishing hints of a system where the ruling party — the Justice and Development Party (AKP), which is designing the system — is expected to have an advantage.

Over the last 15 years that Erdogan has been in power, party identification has shifted from ideological commitment to populist theater politics, and the AKP is thought to be minimizing the weight of Kurdish votes overall. This confidence in his well-established “ballotocracy” indeed allows Erdogan to end his traditional efforts to form unofficial election coalitions with diverse constituencies. The public is not convinced of the possibility that Erdogan can ever lose at the ballot box.

For decades, Kurdish political parties faced legal challenges. They failed to pass the 10% national vote threshold to be seated in parliament — which meant de facto AKP victories for parliamentary seats in Kurdish regions, despite finishing behind Kurdish parties — until the 2015 parliamentary election, when the HDP passed the threshold and became the third-largest party in the parliament. In those elections, the HDP also was able to make crucial gains in Kurdish majority cities at the local level.

HDP lawmaker Ertugrul Kurkcu told Al-Monitor, “Erdogan’s attempts at secret negotiations with the PKK [Kurdistan Workers Party] in Oslo was partly the inevitable consequence of the then existing alignment of forces in the fight for power. Erdogan’s target was rather more about ousting the army from domestic security mechanisms through the ending of the armed conflict than finding a true solution to the Kurdish question.”

He said, “Erdogan’s expectations of controlling the Kurdish political landscape through the conservative Kurdish elite and pushing liberal elements forward within the Kurdish opposition fell short. Erdogan's openly anti-Kurdish attitude during the siege of Kobani by the Islamic State [IS] in the Syrian civil war triggered violent protests against Erdogan and the HDP filled the vacuum.”

The HDP’s June 2015 electoral breakthrough also showed Erdogan that winning the Kurdish vote as before is no longer possible.

Kurtcu added, “Lacking the qualities of a reformist leader, the pragmatist Islamist tyrant followed in the footsteps of Turkey's former right-wing prime ministers. Erdogan immediately struck a security deal with the military and left the Kurdish issue in their hands, fanned nationalist hysteria to draw the nationalist voters around his government, turned a blind eye on IS attacks against the HDP and with MHP [Nationalist Movement Party] support he grabbed the power in the November 2015 snap elections and waged the biggest war ever against Kurdish settlements — PKK strongholds and HDP voter bases — since 1938. Human casualties were immense, and according to leaked media reports these were a part of a ‘crackdown plan’ inspired by the Sri Lankan army operations against the Tamil Tigers; this plan included the liquidation of the HDP. Hence the crackdown on the HDP leadership.”

In Kurdish majority towns and cities, the central government has been replacing signs with wording in Kurdish with Turkish-language ones. This is in addition to the arbitrary arrests of lawmakers that have been taking place and how the Kurdish political movement is being supplanted. This shows that Kurdish preferences do not matter to the central government and that the AKP will replace Kurdish politicians regardless. Under such conditions, voter turnout is expected to be low.

Kurdophobia is on the rise

The new opposition party — the Iyi (Good) Party — is an alternative hub for nationalist, Islamist groups and the official party program refers to the Kurdish problem as “the eastern and southeastern problem.” Since Kobane, almost all actions of the Turkish government have indicated that it is not only the terror organization PKK that they despise, but also the Kurdish identity.

So the Turkish political spectrum is moving toward the right and also toward being more exclusionary when it comes to the Kurds. Once the HDP is out of the picture, there will be no competition and no alternative to Erdogan. Huda-Par — the Kurdish Sunni fundamentalist Islamist Party — has oscillated between supporting and criticizing the AKP in an attempt to strategize its own survival. There is a possibility that Huda-Par would rally pious votes for Erdogan again. Although Huda-Par's vote potential is not comparable to the HDP's, if the HDP is not allowed to campaign, Huda-Par might deliver some votes to the AKP base.

Ayhan Bilgen, an HDP lawmaker who was recently released from prison, explained in a TV appearance that almost all books in the prison’s library are self-help or self-improvement books. He believes that the government wants to convey the message to the inmates to focus on saving themselves and to forget about their communal ties. In many ways, from workers’ rights to women’s rights, group activities have been silenced under the emergency law. The AKP believes that if group attachments are weakened, so will the opposition against the state. The Kurds represent the most dangerous group identity.

Bilgen told Al-Monitor, “Erdogan now produces politics for an ultranationalistic bloc. The attitude of this alliance toward the Kurds has traditionally been denial and elimination. In other words, because Erdogan failed to carry the challenges of peace, now we all have to pay the price of conflict.”

As Bilgen’s explanations highlight, even though communal ties might be weakening, they are not completely dissolved or eliminated, particularly in the face of growing ultranationalist Turkishness and the developments with regard to the Kurdish regions of Syria and Iraq.

Overall, Erdogan appears to be dismissing the Kurdish vote bloc despite knowing well that, both domestically and regionally, his aggressive attitude toward the Kurds could have negative consequences, one of which could be electoral loss. Erdogan may be able to survive the Kurdish apathy in the elections, but Turkey will soon have to face the growing Kurdophobia.