Rejected by two major electoral alliances, the Kurds have set up their own alliance with an eye on prizes much further away than Turkey’s snap polls. 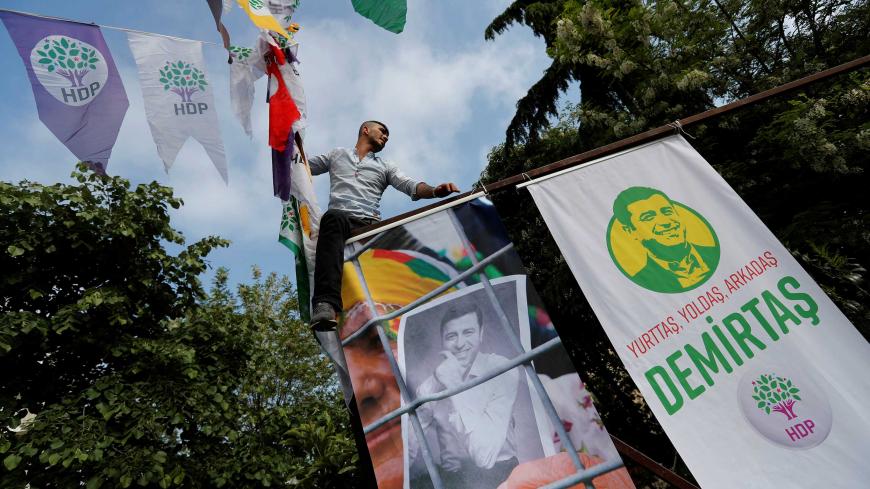 A supporter of the pro-Kurdish Peoples' Democratic Party hangs posters of Selahattin Demirtas, the party's jailed former co-leader and the candidate for the upcoming presidential election, during a gathering in Istanbul, Turkey, May 4, 2018. - REUTERS/Murad Sezer

Turkey is heading into the June 24 elections with two major alliances. The People’s Alliance is composed of the ruling Justice and Development Party (AKP) and the ultranationalist Nationalist Movement Party (MHP), and the anti-Erdogan Nation Alliance is made up of the Republican People’s Party, the Iyi or Good Party, the tiny Islamist Felicity Party and the Democrat Party.

Now, unexpectedly, a third alliance of Kurdish parties has appeared. The political parties making up the Kurdistan Election Alliance announced they will not only compete in Turkey’s snap elections but hope to take the first step toward national unity among the Kurds of Syria, Iran, Iraq and Turkey. So far, the Kurdistan Freedom Party, Kurdistan Socialist Party, Kurdistan Democratic Party of Turkey and Azadi Movement have announced their membership in the new alliance. With support offered by the Peoples' Democratic Party (HDP), which has a legislative presence and nationwide structure, the new alliance could become a major actor on Turkey’s political scene.

The alliance has already made some progress on a local level. In the Diyarbakir Chamber of Commerce elections, the Kurds succeeded in defeating the AKP-backed chairman and got their own candidate elected. Can this phenomenon spill over the entire region?

HDP lawmaker Imam Tascier told Al-Monitor that the Diyarbakir Chamber of Commerce elections showed that the Kurds can achieve their goals when they act together. Tascier thinks if the Kurds compete in the June 24 elections as an alliance they can influence the Kurdish base of the ruling AKP as well as Kurdish voters who abandoned the AKP because of its alliance with the anti-Kurdish MHP and those who had not voted for the HDP in the past for whatever reason.

“With this alliance we will prove that the Kurds should not be ignored,” Mesut Tek, the chairman of the Kurdistan Socialist Party, told Al-Monitor.

Why are Kurds so important? According to one poll, Kurdish voters accounting for 4% of the AKP vote in the 2015 elections do not intend vote for the AKP this time. Kurds who do not think of voting for the AKP-MHP alliance may also refrain from voting for the opposition Nation Alliance because it did not take in the pro-Kurdish HDP.

Tek said that Kurds constitute 20% of the national vote that will now be targeted by the Kurdish alliance. Will the Kurds succeed? Can the HDP, which until now could not mobilize the entire Kurdish constituency, succeed this time with the Kurdish Alliance?

The Kurdish alliance was not formed to operate just inside Turkey and not only to compete in the coming elections. If successful, the new alliance will wield the strength of the Kurds not just in Turkey, but in the entire Middle East.

The idea of the alliance was promoted by now imprisoned HDP leader Selahattin Demirtas in his 2015 meetings with the Iraqi Kurdish leader Massoud Barzani. It was shelved when the government’s anti-HDP operations culminated in the jailing of Demirtas. When HDP co-chair Pervin Buldan met with Barzani last month, they agreed the alliance should target the Kurds in Turkey, Iran, Iraq and Syria.

Imam Tascier described the project, now called “National Union of Kurds,” as a Kurdish project to help each other, act together and eradicate enmities among Kurds.

“There are no divisions in the minds of Kurds. They think that the borders that separate them are superficial. Kurds have never accepted these borders after they were declared in the early 1900s. We have to restore the spirit of unity but not against any one country or nation,” Tascier told Al-Monitor.

“It is not possible to handle the Kurdish issues in Syria, south Kurdistan and Turkey separate from each other. You can’t think of Afrin distinct from Hevler and Hevler distinct from Diyarbakir,” Tek added.

According to Tek, the lack of a solution for the Kurdish issue is a major cause of the instability and social problems in the region. “Sadly Kurds have always been pawns and never play-makers. If the Kurds can achieve unity, then developments in Syria and referendum results in [Iraq] will be discussed as a single package, thus enabling the Kurds to become an important element of the Middle East equation,” Tek said.

But here we must note that that the alliance has not brought all the Kurdish factions together. The Islamic Huda-Par did not join.

Tascier said, “For me Huda-Par is not a Kurdish party.” Tek said that they were in touch with Huda-Par but could not get to them join the alliance. “I think they should be in the alliance,” he added.

Temel Karamollaoglu, the chairman of Islamist Felicity Party, said in a meeting attended by Al-Monitor that Huda-Par could enter the elections in Felicity Party lists. That may free them from AKP dictates but may negatively affect the HDP’s goal of passing the 10% voting threshold to enter the parliament.

Polls until now indicate the HDP’s performance will decide the outcome of the elections. If the HDP cannot pass the 10% threshold, then the AKP will win a parliamentary majority.