Why is AKP losing the Kurds? 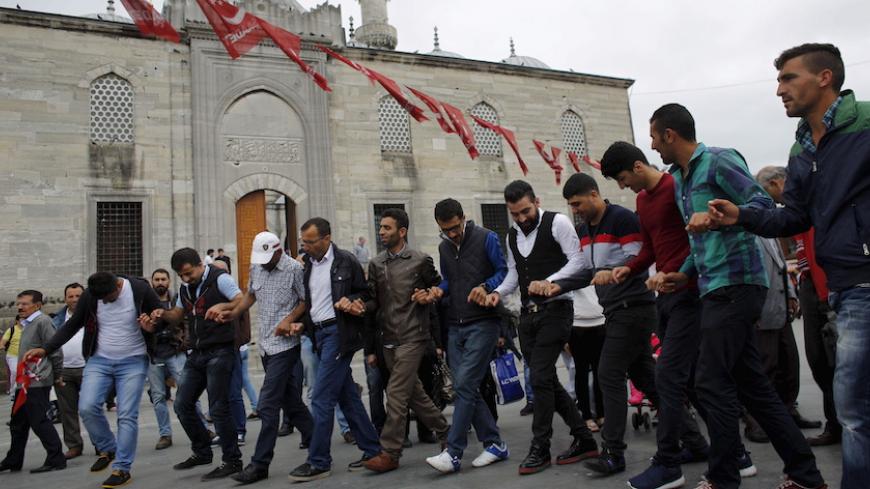 Supporters of the pro-Kurdish Peoples' Democratic Party dance near an election campaign spot in Istanbul, May 28, 2015. - REUTERS/Murad Sezer

Unlike the easily predictable August presidential election, the June 7 elections are rather suspenseful. Pundits agree on a few facts: The pro-Kurdish Peoples’ Democratic Party (HDP) is on the rise and the Justice and Development Party (AKP) has lost the support of some of its loyal allies — most importantly the Kurds — due to campaign mistakes and political and economic failures.

First and foremost, the AKP’s policy failures regarding the Kurdish peace process have been paramount since Recep Tayyip Erdogan became president. Al-Monitor consulted numerous scholars, Kurdish activists and politicians who all agreed that Kurdish support for the AKP is dwindling. Since Al-Monitor columnist Fehim Tastekin’s report on how Kurdish and Arab tribes in the southeast have abandoned the AKP, it has only worsened.

On May 25, in the Kurdish town of Varto in the Mus province, reports surfaced that the entire AKP-dominated city council resigned and declared their support for the HDP. Mehmet Alma, a former AKP member from Diyarbakir, told Al-Monitor, “None of the AKP’s promises were delivered. We waited for 13 years and did everything in the name of peace. So we now work with the HDP that is holding on to the peace process.”

Hatice Altinisik, a member of the HDP’s Central Executive Council who has been campaigning in western cities for almost a year, told Al-Monitor that in the town of Yolkanak, “there are Kurds who had settled there years ago. They used to vote for the AKP, so much so that Erdogan had sent them a thank you placard for their loyalty. Now that the HDP is entering the election as a party, half of them will vote for the HDP.”

Sait Kaya, a spokesperson for Huda-Par, an Islamist Kurdish Party, is running as an independent from the eastern town of Bingol. Huda-Par is not entering the election, due to the 10% threshold, but is running nine independent candidates. “Kurds are disappointed with the AKP’s policies, hence their realignment with other parties, particularly the HDP and Huda-Par,” Kaya said. “The AKP had previously won the Kurdish regions on a borrowed vote. There are significant doubts among devout Kurds about the degeneration of the AKP’s Islamic values, the candidates that the AKP choose for its lists, as well as the reaction of the AKP to the Oct. 6-8 events [Kobani protests].”

Sitki Gungor, senior adviser to HDP chairwoman Figen Yuksekdag, concurred with Kaya’s views on the Oct. 6-8 events. The AKP was seen as pitting Kurd against Kurd, which backfired. “There are too many events, too much pain for the Kurds,” Gungor said. “After Roboski [accidental 2011 aerial bombing of Kurdish smugglers, killing 34] was there justice? A consolation for Kurds? Was one soldier taken to court? To the contrary, Erdogan congratulated the generals for the massacre. This was the first rupture point for the Kurds. Erdogan received the Kurdish vote because in 2005 in Diyarbakir he declared, ‘There is a Kurdish problem. It is my problem.’ That is no longer the case and there is deep anger and resentment, a sense of betrayal, among the Kurds. Then, of course, there is the struggle for Kobani against the Islamic State (IS). The AKP’s attitude during the siege of Kobani took away the last ounce of trust in Erdogan.”

Indeed, several Turkish-language Kurdish news outlets are convinced that the AKP supports, arms and even controls IS and other groups in Syria and northern Iraq to mobilize against the Kurds. The heroes and legends of Kobani may just be tales for western Turkey to consume, but in Diyarbakir, prominent journalist and author Nurcan Baysal shared her observations with Al-Monitor.

“Every day we saluted young martyrs being brought back home for burial from Kobani, Sinjar [Sorani] and the region,” she said. “People here are upset because the border is closed for the Kurds to take medicine, water, food and blankets to our relatives. They see that it is not only IS that is targeting them, but that the AKP supports IS to get rid of the Kurds.”

Economic hardship has exacerbated these major policy failures. Turkey’s eastern and southeastern regions, home to the majority of the country’s Kurds, have lagged behind on all economic and industrial progress variables when compared to other parts of Turkey. Unemployment is also highest in the southeast, with 15.6% of the population unemployed in 2014, nearly double the countrywide average of 9.9%.

Zeynep Bozdas, Huda-Par’s foreign relations adviser, pointed out the lack of investment in the region and how youths suffer from drug addiction. “There are Kurdish parliamentarians in the AKP,” Bozdas said. “People voted for them and hoped for economic recovery in the region. They are disappointed.”

Kaya added, “My constituency in Bingol has supported the AKP blindly for the last 12 years, and it is the fifth least developed province in the country. There are incomplete roads, a 250-bed state hospital that was planned five years ago but is still under construction. Health services are so horrible that every month people from Bingol die just trying to reach hospitals in other cities.”

Uygar Gultekin, a journalist from Agos Daily, has reported from Kurdish cities on how financial hardships have increased in border towns, particularly Urfa, which witnessed a sudden influx of Syrian refugees. Life has become more expensive as demands for housing and cheap labor exploded.

To top this off, the AKP has made significant failures in its campaign. “AKP candidates are running a low-key and tense campaign, while HDP candidates are relaxed,” Gultekin said. “If nothing else, you can always spot the heavily armed police protection around the AKP candidates’ homes and buildings. There is still the shadow of guns in the region.”

Most AKP candidates are known as elders of tribes or “feudal landlords who will win votes from their own clans but not from anyone else. In other words, the AKP made wrong choices in the Kurds it picked to be candidates,” said Aliza Marcus, the author of “Blood and Belief,” a widely acclaimed book on the Kurdistan Workers Party.

Over the past two months, despite all forms of censorship, local media outlets have documented peaceful protests against the AKP. People are protesting in creative ways. One particularly effective form of protest has been individuals turning their backs on AKP convoys and whistling, as seen with Erdogan’s May 4 convoy in Mardin and Prime Minister Ahmet Davutoglu’s May 6 convoy in Mus.

Erdogan has been actively campaigning all around Turkey, but in Kurdish regions where the mayors belong to the HDP, these officials have refused to greet and roll out the red carpet for him. Erdogan did not take it well. At a May 15 election rally in Van, Erdogan told the dwindling crowds, "We are dedicated to you, but you guys fail to understand me. I am not saying it for those of you here, but the ones who didn’t attend."

Meanwhile, news has leaked that government employees have been ordered to attend AKP rallies. While Erdogan’s election posters hang even in the corridors of the state hospital, strict bans and confusing regulations are imposed upon opposition parties.

The AKP has been running a cruel and negative campaign against the opposition, particularly the HDP and its chairman Selahattin Demirtas. The AKP has accused Demirtas of consuming pork and being a Zoroastrian. Despite tenacious AKP efforts to discredit the HDP and provoke them into street fights, the HDP has employed savvy campaign strategies. While pundits debated how a “Kurdish” party can run a countrywide election campaign, Al-Monitor reported in June 2014 that the HDP had reached out to populations outside Kurdish regions. It is crucial to remember that thousands of Kurds were forced to migrate to western cities, hence Demirtas’ May 23 rally in Izmir, which proved that the HDP could garner strong support in the west.

Sultan Ozcan, the HDP’s candidate in Kayseri, an AKP stronghold, told Al-Monitor, “We are campaigning door to door, face to face, avoiding any potential tension. It is working smoothly so far. We display a pleasant positive attitude and people respond to that.” Indeed, people respond to more positive, colorful campaigning. They are tired of bickering, fear mongering with an Islamic tone and Erdogan’s waving of Kurdish Qurans at rallies.

The AKP was assured that they would continue to receive 50% of the Kurdish vote, but with the HDP’s decision to enter the race as a political party, the AKP is panicking. The AKP has gone on the offensive publicly, declaring its wish to not see the HDP as a party in parliament.

When this was not enough, it has engaged in negative campaigning and even attacks on HDP offices. Yet, it all seems to have backfired. Calling the HDP a terrorist party and a menace to the peace process has robbed the AKP of its widespread Kurdish support.

At this point, campaigning for Kurdish AKP candidates is like “climbing a greased pole” one taxi driver in Diyarbakir told Al-Monitor. Perhaps the Kurds, along with others in Turkey, are also suffering from “Erdogan fatigue.”