Kurds in Turkey unite to take aim at Ankara in elections

Saying they have taken enough abuse, Kurds in Turkey have formed an alliance to strengthen their standing in upcoming elections. 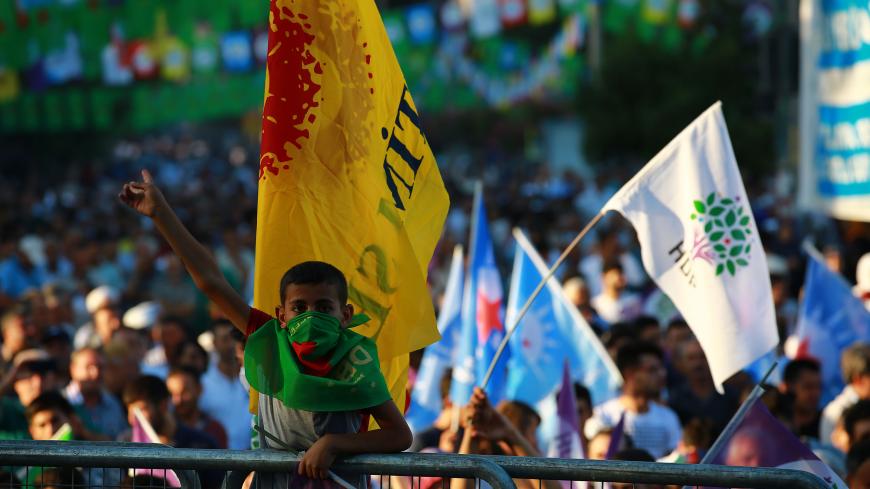 Last year, two of Turkey's major political parties — the ruling Justice and Development Party (AKP) and the opposition's Nationalist Movement Party (MHP) — put aside their differences and formed an alliance to ensure their parties' victory. They then continued their oppressive and threatening policies, basically taunting the much smaller Kurdish parties to form their own alliance if they wanted change, knowing how splintered the Kurds have been historically.

Now, many Kurdish movements have accomplished what seemed impossible: They have united to form the Kurdistani Election Alliance to run in the local elections in March under the umbrella of the existing pro-Kurdish Peoples’ Democratic Party (HDP).

The alliance is made up of the Democratic Regions Alliance, which is actually the core of the HDP in the southeast region; Kurdistan Islamic Movement (Azadi); People and Freedom Party, an Islamist group; Kurdistan Communist Party (KKP); Kurdistan Democratic Party-Turkey (KDP-T); and Revolutionary Democratic Kurdish Association (DDKD).

How could such disparate groups come together?

There are several factors behind it. First is the trauma inflicted on Kurds by the Ankara government, which abandoned the peace process and initiated a policy of oppression in 2015. Several Kurdish cities were razed. In early 2016, witnesses in Cizre described the situation in a UN report as "an apocalyptic picture of the wholesale destruction of neighborhoods." The report said as many as 189 women, men and children were trapped for weeks in basements without food, water, electricity or medical care. The people were killed when shelling set the buildings on fire. The buildings subsequently were razed, destroying evidence and making it difficult to identify the victims.

During the state of emergency declared following the July 2016 coup attempt, thousands of civilian institutions and media organs were closed, and HDP senior officials, deputies, mayors and local administrators were detained.

Another factor that united the Kurds was Ankara's appointment of civil servants as trustees to replace mayors in 96 municipalities — HDP mayors who had been elected by the people.

Still another factor has been Turkey’s intervention in Kurdish areas of Syria. After wiping out the autonomous structure in Afrin, Turkey now threatens areas east of the Euphrates, defining Kurds there as enemies. Meanwhile, Ankara is billing itself as "the Kurds' only friend."

But this policy of targeting Kurds with illegal practices is backfiring, as one can see from the emergence of the Kurdistani Election Alliance. The group is striving to change the perception rooted among some Kurds that their votes make no difference.

Also helping to unify Kurds, the HDP and other movements had come together in October in response to a call to “struggle against assimilation.” They formed the Kurdish Language Protection and Development Platform to declare Kurdish as their official language to be taught in schools. At a time when Kurds were being fired from jobs and harassed for speaking Kurdish, the platform came out with calls of “Speak Kurdish at home, in the street, in buses and hospitals.”

Former HDP Chairman Selahattin Demirtas, commenting from prison, urged Kurds to embrace the alliance. "The Kurdish people were unable to secure their national unity [to] protect themselves against the massacres. Their nature, culture, language and history as a whole have always been heavily attacked," said Demirtas.

Expectations for the alliance are twofold: to re-win the elections in municipalities where mayors were replaced by government-appointed trustees, and to open the way to total national unity among Kurds.

Azadi movement spokesman Ayetullah Ashiti told Al-Monitor, “If we consider smaller parties one by one, it [doesn't seem like] many votes. But together, their synergy will be massive because our people want us to unite. We pay attention to the effect of such unity in Kurdistan geography.”

Imam Tascier, an HDP deputy from Diyarbakir, also spoke with Al-Monitor about the unification process.

“We have been struggling for this for 10 years, but Kurds could never get together. Some of those parties were established in the 1960s or 1970s but couldn’t unite. It's the hardened policy of the government that disregards the [Kurdish struggle] that brought us together. This is an important message to the Kurdish people. It will have a major effect in the elections. It is also a message to the government that it can’t solve the problem by marginalizing and terrorizing Kurds," Tascier said.

DDKD member Mehmet Emir Eren also predicts the alliance will have a significant bearing on the elections "if handled properly."

"Thousands of HDP people were imprisoned. Many people went abroad. We need people to work on the election campaign. This alliance can fill the void; it could overcome the fatigue among the people," Eren said.

Parties that haven't joined the alliance include the Kurdistan Socialist Party (PSK); Kurdistan Freedom Party (PAK); Rights and Freedoms Party (Hak-Par); and Hezbollah’s extension, the Free Cause Party (Huda-Par), an Islamist group that had not participated in the negotiations. The nationalist Hak-Par declared it will run in the elections with independent candidates.

Wide cracks remain among the Kurdish people, even among the Kurdistan Election Alliance parties. Ashiti, of the Azadi movement, attributes this to feudal trends. He said, “Kurdish politics [in the past] couldn’t overcome fault lines. We need a democratic system. Hopefully, this unity will be a step toward it.”

Still, Kurdish parties that have joined the alliance are talking of determining their own national future. “There's not much difference between the HDP platform and that of Kurdistani parties. … HDP’s base is Kurdish. Kurds want a free and dignified life. My dreams are in Kurdish; I can’t even express them in Turkish," Ashiti said.

Eren agreed there are hurdles to overcome, but he also is optimistic. “[Kurdish leaders] have been talking of a Kurdish alliance for years. There are many problems. Regional governments intervene. There are barriers by feudal structure and culture. But this new beginning could be a step toward unity,” he said.