Turkey’s authoritarian shift may be institutionalized in a matter of months, as few obstacles remain before a referendum on a presidential system. 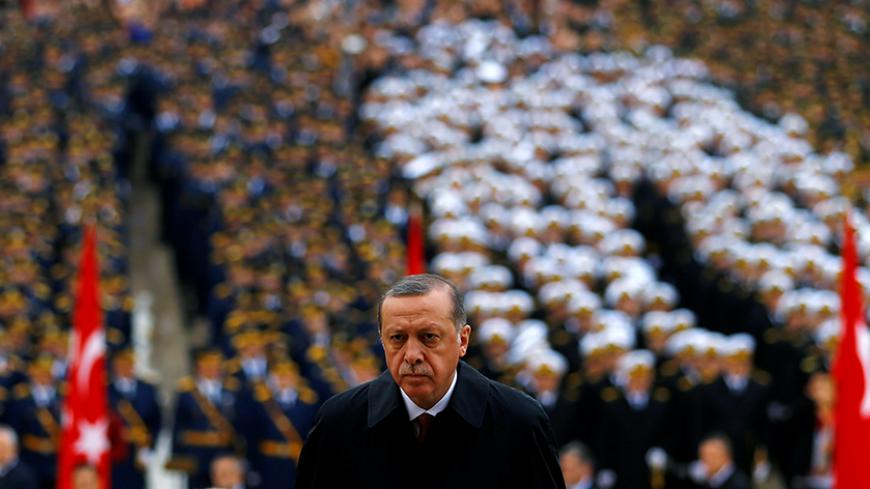 The political mercury in Turkey is expected to hit record highs in April, when the ruling Justice and Development Party (AKP) plans to put a crucial constitutional amendment on a referendum. Given the current political and social trends, the electorate is highly likely to approve the amendment and mark Turkey’s transition to an executive presidency regime — President Recep Tayyip Erdogan’s biggest dream.

To come true directly in parliament, this dream requires support from at least 367 deputies in the 550-member legislature. The AKP, however, holds only 317 seats, which brings up the referendum option. For that, too, the AKP needs support from the opposition since constitutional amendments require the approval of at least 330 lawmakers to be put on a referendum.

For years, the AKP had sought to forge a political alliance to advance the amendment plan. The opportunity finally came in the wake of the July 15 coup attempt in the form of rapprochement with the Nationalist Movement Party (MHP). In October, the MHP pledged support for the presidential system provided that its political sensitivities were taken into account. The AKP moved fast to draw up a draft and in mid-November submitted the text to the MHP. The two parties are now expected to jointly finalize the draft.

If materialized, the transition from a parliamentary to presidential regime will have a profound impact, both politically and socially, in Turkey. First and foremost, the country would abandon a system that has meshed with its social structure and political traditions for decades.

Turkish democracy has long been a flawed one, with the state dominating society, tight government control of freedoms, personality cults around leaders and a long-lasting military tutelage. Nevertheless, the country has sustained some sort of representative democracy as a political tradition dating back to Ottoman times. Since 1876, the year the first constitution was proclaimed, this tradition has rested on the parliamentary system. Barring periods of military rule, when the constitution was suspended and parliament temporarily dissolved, the parliamentary system has remained the essential form of governance — and not as some fluke of history, but as a choice grounded on tangible reasons.

In the Ottoman era, the parliamentary system was the means of power-sharing between the Sublime Porte and other social and political powers, ensuring representation for a society of diverse ethnic and religious groups. In Republican times, it became the basis on which a relative balance was sought and partially achieved at the country’s major fault lines — between secular and devout, Alevis and Sunnis, and Turks and Kurds.

The tradition is well rooted, and, in earlier years, the charismatic leaders of the center-right, Suleyman Demirel and Turgut Ozal, who also floated the idea of a presidential system to sustain their power, faced serious resistance and failed to forge ahead.

Today, however, the situation is dıfferent. The combined seats of the AKP and the MHP are enough to take the presidential system to a referendum. Erdogan seems confident that any proposal to that effect will win popular approval, which, given his steady popular support, is very much possible.

Obviously, abandoning the parliamentary system would amount to the burial of a relatively pluralist political tradition in favor of a relatively majoritarian system. This, in turn, is likely to accelerate the authoritarian shift that has been under way in Turkey for some time. In other words, the three main problems plaguing the country today — Erdogan’s personalization of power, tendencies of power concentration and quest to build an authoritarian democracy model — are likely to deepen fast.

The constitutional amendment draft the AKP submitted to the MHP contains ample evidence to that effect. Unlike presidential systems in democratic countries, which are based on the principle of a strict separation of powers, the AKP’s draft rests on the idea of the unity of power, embodied in the president. The president, for instance, is entitled to appoint half of the judges of the Constitutional Court, the Council of State and the Supreme Board of Judges and Prosecutors as well as the chief prosecutor of the Appeals Court. Given Turkey’s partisan traditions and the skewed relationship between judiciary and politics, this means that the top echelons of the judiciary would be shaped under the president’s tutelage.

Under the draft, executive power is naturally transferred to the president. The president, however, is not only entitled to run domestic and foreign politics and approve laws, but is equipped with some super powers that transcend into the legislative realm. The president can issue legislative decrees and even has the authority to dissolve parliament.

Yet, the most critical element that paves the way for a subordinate legislature is the one that allows the president to remain at the helm of a political party, an issue that Erdogan has insistently highlighted and even held as a top priority. Under Turkey’s existing electoral laws, the electorate votes for party tickets with multiple parliamentary candidates in broad electoral districts. The candidate lists are drawn up at party headquarters, mostly by the party leader. So, a president-party leader who has drawn up the list of candidates will inevitably become the political boss of the parliamentary group that emerges from the elections. In other words, the president will be the leader of the majority or at least the biggest party group in parliament and, thus, the de facto leader of the legislature.

All those draft provisions point to a system in which the governing party controls the state, or rather, a political party and the state become one. Back in 1935, Turkey experienced the most rigid version of this model — the legal one-party system — and knows very well what it means.

In sum, the presidential system proposal offers a prospect in which popular approval is seen as the sole source of legitimacy, universal values are played down and the concentration of power in a single hand is embraced as the ideal order. And all this comes as an institutionalized and permanent new structure and not any transient and reversible situation. Ankara’s mounting tensions with the European Union, controversial appeals to reinstate the death penalty and talk of joining the Shanghai Cooperation Organization should be all seen in the same context.