Turkey as close as ever to presidential regime

An opposition leader’s call for a referendum on a presidential regime has raised the specter of fresh turmoil for Turkey, threatening a rough wave of nationalism, an institutionalized authoritarianism and the demise of dialogue on the Kurdish problem. 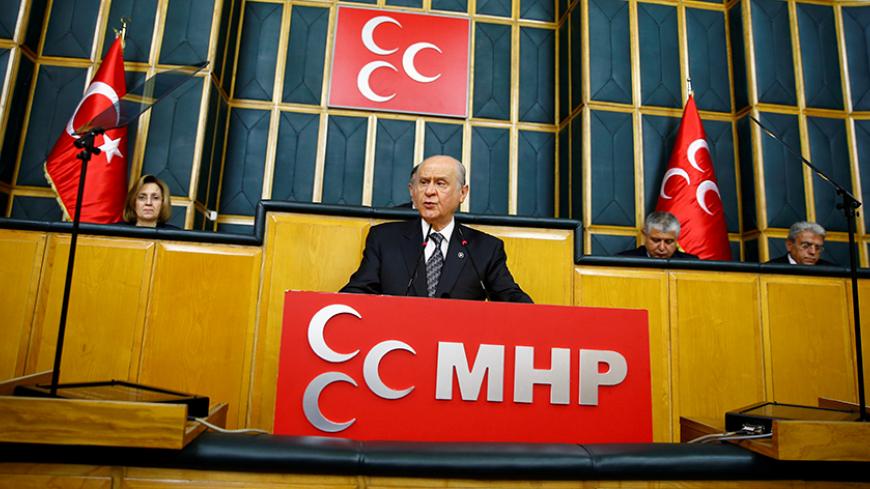 An unexpected move by an opposition leader has abruptly brought Turkey to a critical threshold, raising the prospect of a profound political shift. In a speech to his parliamentary group Oct. 11, Devlet Bahceli, the head of the Nationalist Movement Party (MHP), criticized President Recep Tayyip Erdogan for overstepping his constitutional powers and acting as a de facto executive president. As a solution, Bahceli suggested that the executive presidential system, which Erdogan has long dreamed of, should be put on a referendum to let the people have the final say. The MHP leader did not stop there. Though he had been a staunch defender of the parliamentarian system so far, he said the MHP could support the required constitutional amendments if its “sensitivities” were respected, lending critical leverage to the ruling Justice and Development Party (AKP).

Clearly, the Turkish political system is now faced with a prospect that would change all balances, sway political alliances and impact its fundamental problems.

On Nov. 2, Turkey will mark 13 years under Erdogan rule (11 years as prime minister and two years as president). Over the years, Erdogan’s priorities shifted according to the political conjuncture and according to his political power and standing. No doubt, transition to an executive presidency has been his top priority lately. Even in the early years of his rule, Erdogan brought up the presidential regime as his preferred model, but he made it a concrete objective only after August 2014, when he became Turkey’s first popularly elected president.

Turkey’s constitution, in force since 1982, bestows only symbolic powers to the president and thus exempts him from political responsibility, concentrating the actual authority in the prime minister’s hands.

Yet Erdogan did not give up his ambition to rule the country, convinced he had strong popular support on that. He moved step by step. He based his 2014 campaign on the theme that he would be a president different from his predecessors and he would remain involved in decision-making. And in the general elections last year, he pushed the government to promote the presidential model as a priority, while also personally holding rallies to that effect. Yet the AKP fell short of the parliamentary majority it needed to rewrite the constitution unilaterally or at least force a referendum on the issue, while the other three parties in parliament stood behind the parliamentarian system.

Erdogan, however, was not deterred. He now argued that the spirit of the constitution had changed because the president was no longer elected by parliament but by popular vote, and that the constitution should be interpreted accordingly. Acting as a de facto executive president, he flouted key constitutional provisions like the one that requires presidents to be neutral vis-a-vis political parties, retained control over the AKP parliamentary group and pressed ahead as an executive authority.

So in the past three years, problems stemming from the conduct of a president who pushes and violates constitutional limits have become a dominant issue in Turkish politics, leading to much criticism and controversy, including the power struggle between Erdogan and former Prime Minister Ahmet Davutoglu, who was eventually sidelined. Since May, when Erdogan loyalist Binali Yildirim took over as prime minister, the de facto presidential regime has virtually become a routine despite all objections.

It was in this climate that the MHP leader spoke out, prompting the AKP to quickly revive the drive for a formal constitutional amendment. In a matter of days, AKP leaders announced that the amendment could be brought to parliament in January and put on a referendum in April.

The prospect of a presidential regime has never been that close and real for Turkey, which has been governed under a parliamentarian system since 1876. So what could be in store for the country now?

To start with, a completely new political atmosphere. Step by step, a new power block, a new political alliance is emerging, promising a climate with a stronger nationalist and statist bent. The MHP’s condition of a presidential regime that takes into account its “sensitivities” is the first signal to that effect. And the party’s “sensitivities” basically mean that:

What these preconditions have in common is that they all block political avenues in the Kurdish problem, like negotiations, political settlements and peaceful initiatives. This, however, would be no bother for the AKP. On the Kurdish problem, Erdogan has adopted an approach similar to the one of the MHP, thus opening the door to their alliance.

The Kurdish problem is also a key aspect in Erdogan’s interventionist policies in Syria and Iraq. While in Turkey, his policy is based on ruling out any effort other than the military one; in Syria and Iraq, it is focused on curbing the Democratic Union Party and the Kurdistan Workers Party and keeping them away from any negotiation table.

In sum, a common fear of Turkey’s breakup and partition, sparked by the rise of the Kurds in the Middle East, is the basic ingredient of the AKP-MHP partnership under the presidential regime umbrella.

With a Kurdish policy centered on security, the rise of a nationalist, statist and authoritarian wave — especially in the state’s relations with its citizens — will come as no surprise, for this is already proven by experience.

And what would an executive presidency mean politically? How would political and institutional balances change?

The AKP’s formal amendment draft is not yet known. What is known though is that for Erdogan the project means the institutionalizing of today’s de facto situation and practices. In a memorable statement three years ago, the then-chair of parliament’s Constitution Commission, senior AKP member Burhan Kuzu, had expressed pity for “the poor Obama” because, he opined, US presidents wielded much less power than Turkish leaders. So what the AKP wants is not an American-style presidential system, based on a strict separation of powers, but exactly the opposite — a system in which the president controls the executive and legislative branches and shapes the judiciary. In short, it is a model based on the de facto unity of powers, with authority concentrated in single hands.

With the presidential regime prospect, the AKP is heading toward a third phase in its 14th year in power. Having devolved from “reformism” to “arbitrary governance,” AKP politics are now aimed at formally installing an authoritarian model of stability. Such a prospect will, no doubt, put a severe strain on Turkey and plunge it into trouble of historic proportions.