How Erdogan can rule Turkey until 2029

A presidential system that could keep Turkish President Recep Tayyip Erdogan in power for 27 years will be a political experience that gives euphoria to its supporters and fear to its dissidents. 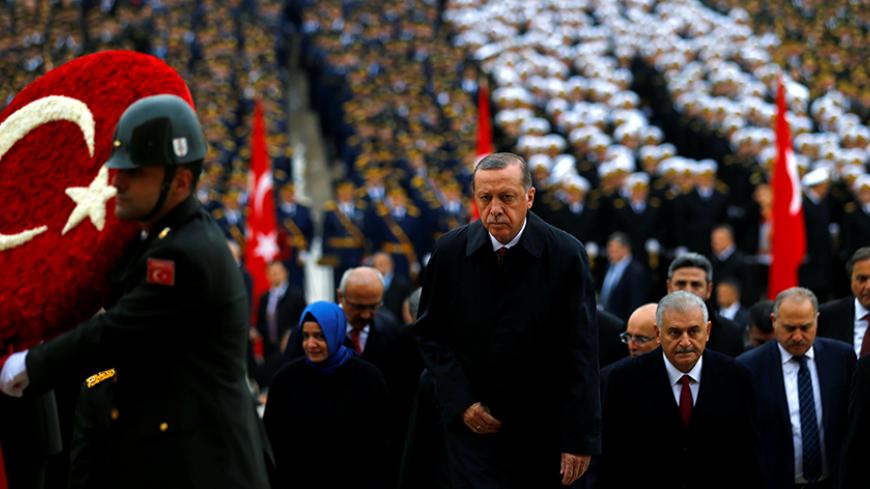 The hottest political topic in Turkey these days is the major constitutional amendment the government is cooking up to introduce a “presidential system.” This, in fact, has been the grand ambition of President Recep Tayyip Erdogan and his Justice and Development Party (AKP) in the past few years. But only now, thanks to the political alliance they formed with the Nationalist Movement Party (MHP), they can find enough mandates in the parliament — more than 330 seats out of 550 — to realize this major transition.

If this transition takes place, Turkey would be abandoning the European-style “parliamentary system” it has been adhering to since the beginning of the republic in 1923 — or even from the first Ottoman Constitution of 1876. In this system, the president is a nonpartisan head of state, whereas the real executive power lies in the hands of the prime minister. Erdogan had no problem with this design throughout his first decade in power when he himself was the prime minister. Once he decided to run for the presidency in 2012, however, he and his advisers began advocating the “presidential system” and a new constitution that would allow that.

Some Turkish advocates of the presidential system point to the United States as a good example, but this comparison is flawed for various reasons. First, America is a federation made up of 50 states that have their autonomy in many matters, making the overall system quite decentralized. In contrast, Turkey is, and will keep on being, a very centralized state. Moreover, the presidency Erdogan seeks will have astonishing powers that would be unimaginable in America, such as appointing the heads of all universities across the nation. Given the electoral system and political culture, a partisan president is also very likely to fully dominate his own party, which can give him the full control of both the executive and legislative branches. Add to this the large appointment powers envisioned for the president over the high judiciary, what may come out is a system of “unified power” — as critically noted by a former adviser to former Prime Minister Ahmet Davutoglu. This would be the exact opposite of the system of checks and balances that is built into the American model.

Advocates of the presidential system also argue that it will save Turkey from all the previous ills, from economic problems to terrorism — but this too looks like more propaganda than analysis. They even claim that the presidential system will save Turkey permanently from military coups, whereas other experts think the exact opposite is true. One of them is Shadi Hamid of the Brookings Institution who examines the political models in the Arab world in his notable book, “Islamic Exceptionalism: How the Struggle Over Islam Is Reshaping the World.”

“All other things being equal, parliamentary systems … make coups against elected leaders less likely,” Hamid observed. Because “the fact that presidential contests are all or nothing — only one person, after all, can win — further heighten[s] the existential tenor of political competition.”

Unfortunately, there is little room to calmly discuss such issues in Turkey now, as the presidential system is promoted more through defiant propaganda rather than a free, open debate. The urgency given to the topic, despite all the other major issues Turkey is facing, also suggests that the yearning for a new system has something to do with the personal trajectory of the current president. As Devlet Bahceli, the leader of the MHP, noted, Erdogan is using lots of “de facto powers” going well beyond his constitutional role, and what needs to be done is to make the system compatible with this “de facto reality.”

Here is the possible scenario, as reported in the Turkish press, for the transition to a presidential system: The ruling AKP has just submitted three optional constitutional amendment packages to the “opposition” MHP: a whole new constitution, a major amendment and a more limited amendment — all focusing on a presidential system. When the MHP approves one of these, the parliament will vote for it, opening the way for a referendum sometime in early 2017. If a “yes” vote comes up, which is quite likely, then Turkey will have an entirely new political system.

However, as insider reports also suggest, the transition will not take place overnight. There will be a two-year “provisional period,” during which Erdogan will use his newfound powers. The new constitution will fully come into effect in 2019 — also the year Erdogan’s current five-year term ends. Then, the first presidential elections for the presidential system will take place. Since his current presidency will not count, Erdogan will have the chance to go for two more terms, or for 5+5 years, keeping him in power until 2029. He would be 75 years old then — and in power for 27 years. This would be almost twice the time Mustafa Ataturk spent in power, giving Erdogan a much bigger continuum of incumbency than any other political leader in modern Turkish history.

Is this really possible? Legally, it is certainly possible — and that is, in fact, the whole point about the presidential system, at least according to the opposition. Politically, Erdogan will have to sustain his popularity to keep winning elections in the next 13 years. He already has a large ideological base whose devotion to his persona seems unbreakable, but he also gets the support of pragmatic voters who think they have been better off under the AKP. To sustain the latter, Erdogan will have to keep the economy going, and whether he can really do that may be the pivotal question regarding Turkey’s political future.

In any case, we will be witnessing a remarkable political experience. It will be an experience that gives euphoria to its supporters, fear and trauma to its dissidents, and marks a significant place for itself in the political history of the world.