Now Erdogan is cooking up a coup to overthrow himself

Erdogan has been promoting his “presidential system” as the way for Turkey. Now, without any amendment in the constitution, he is declaring it as a “de facto reality.” 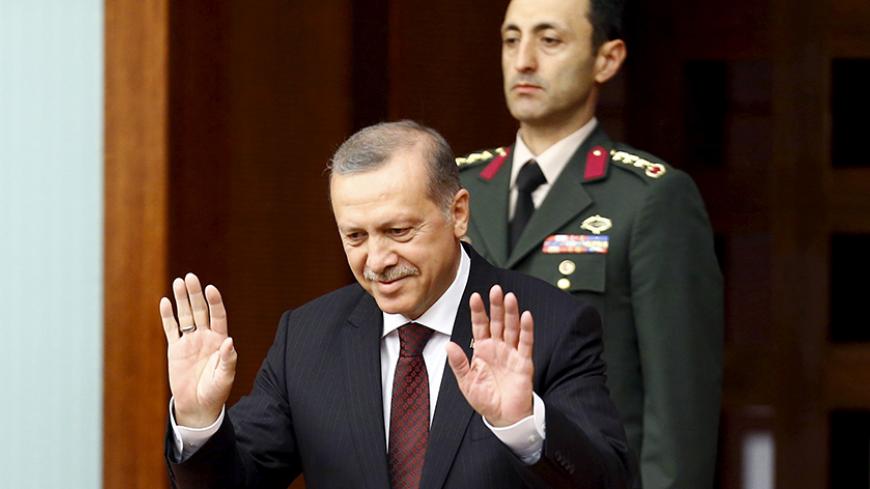 Over the past decade, many of President Recep Tayyip Erdogan’s adversaries were blamed for cooking up coups in Turkey against “the constitutional order.” Some were imprisoned, for months or even years, after highly controversial investigations and indictments. It has also been a dominant theme of the pro-Erdogan propaganda machine to depict all elements of the Turkish opposition as pawns of a global conspiracy to topple Erdogan with a coup. Few could imagine that Erdogan himself would be blamed for a coup.

Yet it came with an astounding remark Erdogan made in a public speech Aug. 14 — a speech that created shock waves in the nation. To a cheering crowd in his hometown, Rize, he said:

“There is a president with de facto power in the country, not a symbolic one. The president should conduct his duties for the nation directly, but within his authority. Whether one accepts it or not, Turkey’s administrative system has changed. Now, what should be done is to update this de facto situation in the legal framework of the constitution.”

Almost all opposition figures reacted to this statement by Erdogan, but the most notable comment came from Kemal Kilicdaroglu, the leader of the main opposition Republican People’s Party (CHP). “Erdogan confessed to staging a coup during his speech in Rize,” Kilicdaroglu said, adding, “The major feature of a coup maker is that they stage a coup and then try to establish the legal basis for their coups. Now, Erdogan says, ‘I staged this coup. It is now time to construct its legal basis.’… The person saying this is the one who swore on his honor and his life that he would be loyal to the constitution [in his presidential oath].”

Besides other opposition leaders, several of Turkey’s prominent constitutional law scholars also spoke to the press and criticized Erdogan’s remarks. One of them was professor Ergun Ozbudun, the same scholar Erdogan consulted in 2007 in his more liberal-leaning days for a constitutional draft. Ozbudun said Erdogan’s statement was clear evidence that he “violates the current constitution.”

Turkey’s current constitution is like those in many European Union states and Israel: There is a president, who is a nonpartisan head of state, and a prime minister, who is a party leader with real executive power. And Erdogan had no problems with this design until he decided to run for president, which he won in August 2014. Since then, he has been promoting a “presidential system” that would give him full executive powers.

Erdogan bases his claim on the mere fact that he was elected president in a new way. Before him, presidents were elected by the parliament. But due to a constitutional amendment made in 2007, Erdogan was elected directly by the people, marking a first in the country’s history. The implication, he claims, must be that the popularly elected president must be like no other. As the embodiment of the nation, he must have sweeping powers.

Yet this argument does not hold much water. There are at least seven other parliamentary democracies in Europe where presidents are elected directly by the people, but still have more symbolic than executive powers: Austria, Finland, Lithuania, Poland, Portugal, Slovakia and Iceland. Moreover, the mandate of previous Turkish presidents was not based on anything other than the nation, as well, because the parliament itself is elected by none other than the people.

For sure, Erdogan still has the right to promote a “presidential system,” as he and his propaganda machine does, and ask for the Turkish people to vote for it in a referendum. One of the opposition leaders, Selahattin Demirtas, called on Erdogan this week and proposed such a single-topic referendum to ask the people, “Do you want a presidential system or not?” Demirtas probably trusts the polls, which indicate that only 27 percent of all Turkish voters are excited by the presidential system. Erdogan, probably aware of the same polls, has not yet responded to this proposal.

What is unacceptable is the implementation of this system by Erdogan as “de facto reality.” It is, in fact, unbelievable how he could declare that. He might be encouraged by the political uncertainty that has ensued since the general elections of June 7. Since then, no government has been formed, as all coalition talks failed — conspicuously, many believe, partly thanks to the maneuvers of Erdogan himself. Moreover, the “peace process” with the Kurdistan Workers Party has collapsed, and political violence has returned to the Turkish scene.

Perhaps Erdogan and his team feel that the time has come for the nation to honor its savior — a resolute leader with an iron will who will crush all the enemies within. Little do they realize, though, that the nation needs the exact opposite: a gentler leader who can heal scars, build bridges and offer some reconciliation to a bitterly divided society.