Erdogan’s renewed ambitions to install an authoritarian presidential system in Turkey are raising concerns he might further restrict freedom of the press and open a path for a dictatorship. 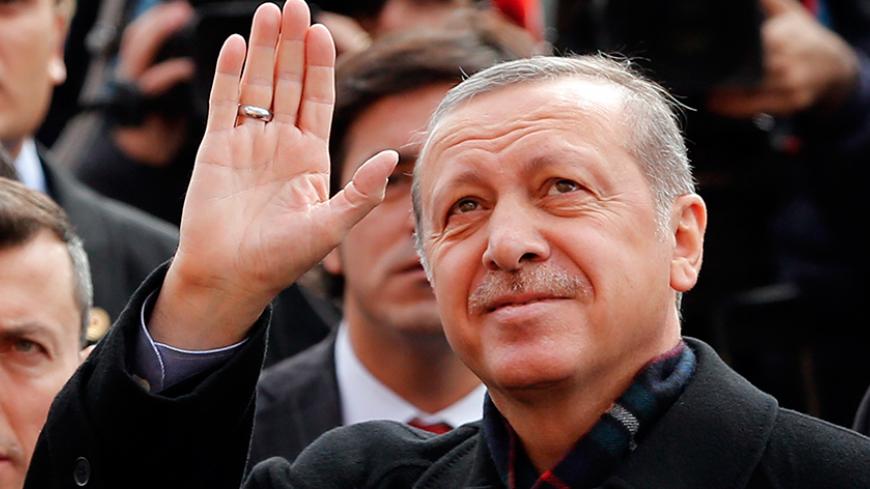 Turkish President Recep Tayyip Erdogan greets his supporters as he leaves from a polling station in Istanbul, Nov. 1, 2015. - REUTERS/Murad Sezer

In the previous elections, held June 7, the rival Peoples’ Democratic Party (HDP) emphasized and berated Erdogan's intentions. “We won’t let you become an executive president!” was the main slogan the pro-Kurdish HDP used then. It was perhaps the most memorable slogan of the entire election campaign. The message was so influential that the HDP mustered 13.2% of the vote, backed by a remarkable number of voters who chose to support the party for the first time. Those people apparently were worried that an HDP failure to obtain the 10% national threshold would give the AKP a super-majority in parliament and allow it to change the constitution to install a presidential system.

Erdogan has long argued that Turkey should abandon the parliamentary system in favor of a presidential one equipped with strong executive powers for the head of state. Many fear that Erdogan's proposed presidential regime would mark the beginning of an irreversible path to dictatorship. The big losses the AKP suffered in the June 7 polls seemed to be linked to Erdogan’s portrayal of the vote as a sort of a plebiscite for a presidential system. AKP leaders must have come to the same conclusion, for they made no mention of the presidential system in the ensuing snap elections Nov. 1.

Such a move would require the support of at least 330 of the 550 parliament members, while the AKP has only 317 seats. HDP representatives, however, have signaled the party is open to talks on a presidential system, backpedaling from their June 7 slogan. This raises the prospect of negotiations and bargaining on a presidential system, linked to revived settlement talks with the Kurds, involving issues such as house arrest for jailed Kurdish rebel leader Abdullah Ocalan, with the HDP playing a key role in the process.

Yet, a bargaining link to a settlement of the Kurdish problem does not mean the introduction of a presidential system would contribute to democracy in Turkey. A failed parliamentary process for a new constitution has already shown what the AKP has in mind. A draft constitution the party submitted to parliament in 2013 aimed to equip the president with powers and duties hardly seen elsewhere in the world.

Under the AKP’s proposed presidential system, the head of state would have the power to issue executive and legislative decrees, which effectively would mean that both the executive and legislative powers would be concentrated in the president’s hands. Parliament would retain its legislative function, but the president would have veto power over the laws it passes. Moreover, parliament would need a three-fifths majority to override a veto and pass it for a second time. The president would appoint the ministers and half of the members of higher courts, and would have the power to dissolve parliament. Unlike other presidential systems, the one proposed by the AKP stipulates that presidential and parliamentary elections be held simultaneously.

According to prominent law professor and lecturer Levent Koker, the idea of holding both elections on the same day is designed to ensure that the president and the dominant party in parliament are of the same political stripe. Professor Ergun Ozbudun, one of Turkey’s top constitutional scholars, is also seriously concerned about the AKP’s intentions. He said the AKP proposal amounts to “one-man rule with no mechanism of checks and balances.”

But analyzing the AKP’s presidential system hypothetically on paper may not be the best way. One has to take into account also the state of affairs on the ground. In a country where press freedom has hit a deplorable low and judicial independence is constantly on the wane, the question looms: Who can check and balance a strongman sitting at the heart of the system?

Concerns are further aggravated by how AKP supporters interpret the idea. Take, for instance, Abdurrahman Dilipak, a columnist for the pro-government Yeni Akit daily and a prominent voice in the Islamist community. In a striking speech at a gathering in Canada last month, Dilipak said Erdogan would become a “caliph” if elected head of state under a presidential system, and representatives of nations affiliated with the caliphate would have offices in his presidential palace.

Only days before the Nov. 1 election, police raided the offices of Koza Ipek Holding, and pro-government trustees were appointed to manage its media group. The two newspapers and two television channels, which used to be vocal government critics, turned into AKP propaganda machines overnight.

Will Erdogan’s zeal for a presidential system lead to fresh blows to Turkey’s critical media, which is already in an oxygen tent? Could the unprecedented pressure on the media in recent months stem from an intention to gag dissenting voices ahead of a referendum on a presidential system?

In sum, the revival of the presidential system debate has ignited a serious controversy and raised new alarming questions for Turkey.